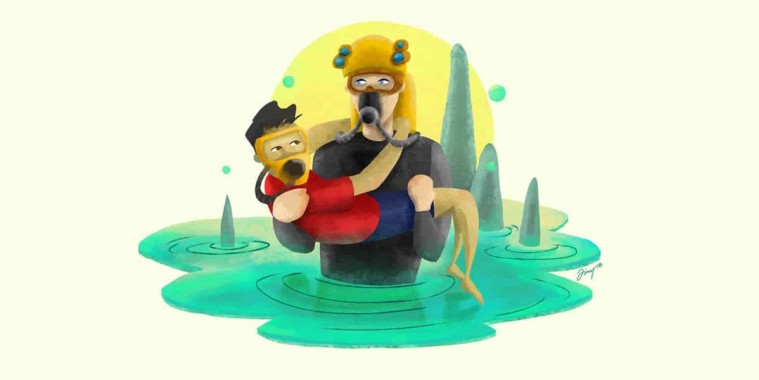 5 things you should know about Thai cave rescue mission

David Beckham posted this heartfelt message calling the Thai boys “heroes”. He also thanked all those who risked their lives rescuing them. According to him, it was “such a positive, uplifting story.” (Photo courtesy @davidbeckham)

After spending OVER TWO WEEKS trapped in a cave in northern Thailand, all 12 youths of a football team, whose ages range from 11 to 16, and their coach have been rescued.

Narongsak Osatanaskorn, the former Thai governor who led the rescue, made the official announcement at 10.45pm (Brunei time, July 10), after a tense few days of rescue missions. “I never imagined this could happen – but we did it. We completed Mission Impossible,” he was quoted as saying in an online news report.

Sadly, there was one casualty – a former Thai Navy SEAL who died after entering the cave to lay oxygen tanks along the exit route. Saman Gunan (alternatively spelled Kunan) has been remembered by his family and people around the world as a true hero.

On July 4 (last Wednesday), The Sun Graphics uploaded the infographics (above) onto its Twitter feed detailing the THREE possible rescue options:

(1) Diving – fitting them with full-faced masks and carefully pulling them out one by one.

(2) Draining – pumping water out of the caves enough to allow the boys to wade or float our with life vests.

(3) Waiting – leaving them there with supplies for months until the rains subside. 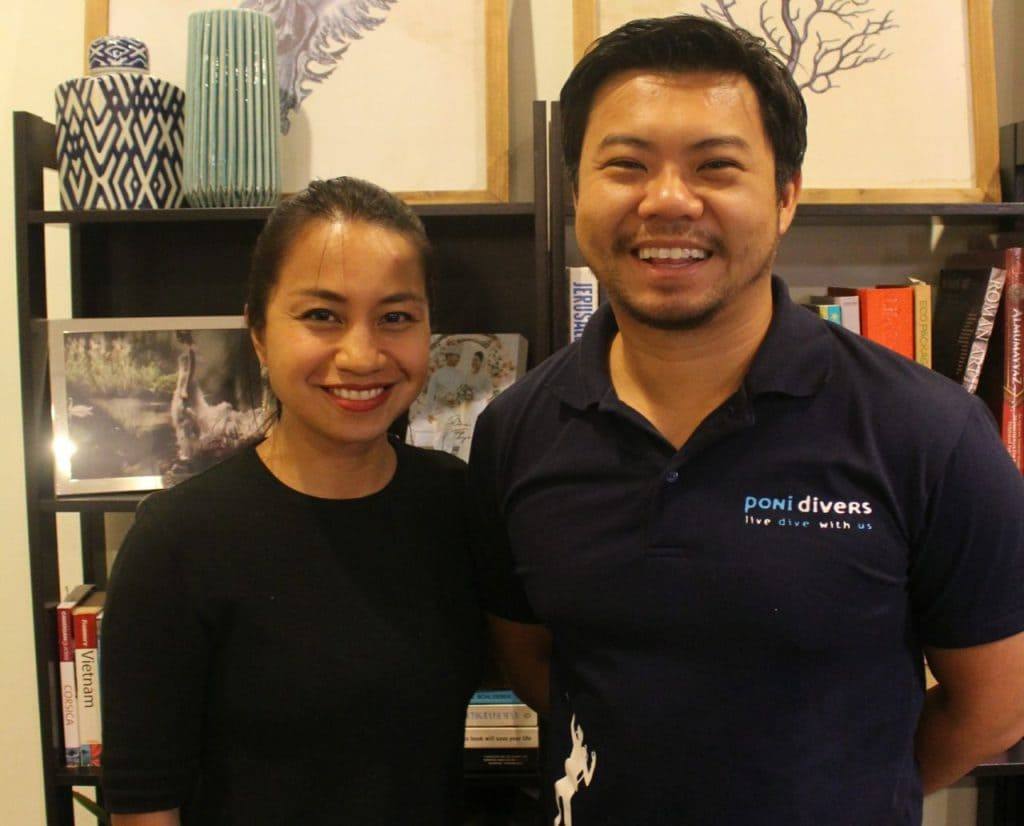 “We’ve been following the story about the rescue mission intently. We are so pleased that the operation went well,” said Anna Aziz, the Business Development Director of Poni Divers, Brunei’s largest dive centre and only watersports centre in the country.

On July 11, the ‘Neue’ team sat down for an interview with Wong Thye Sing, the founder of Poni Divers, to hear his thoughts about the ‘miraculous’ rescue mission in Thailand.

The following answers are his response to our questions: 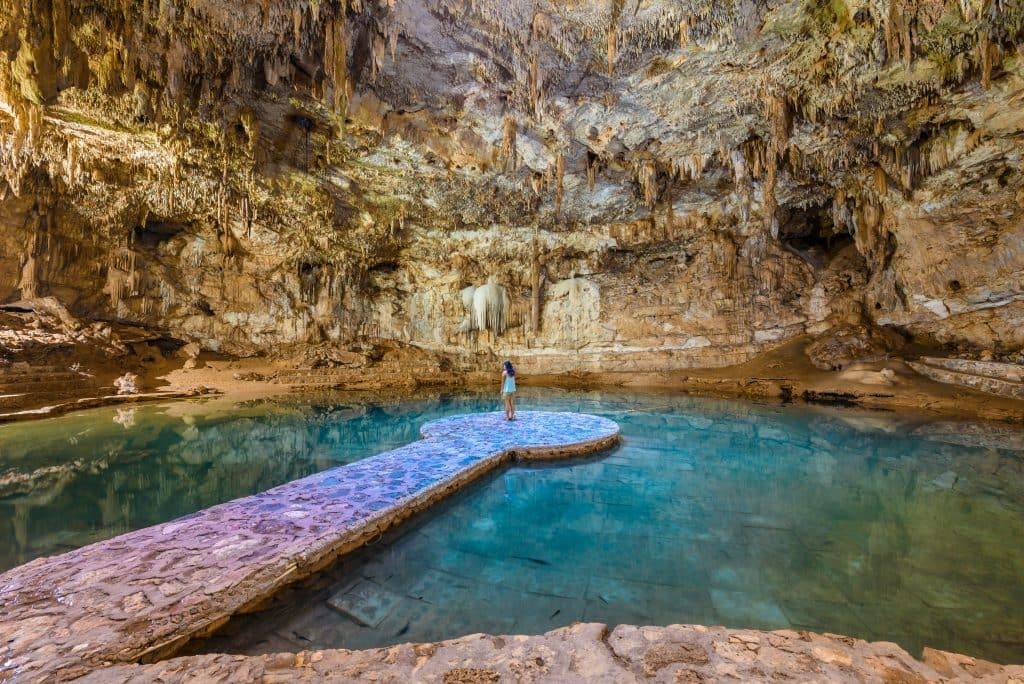 That particular cave in Thailand is not really a cave where people would normally go cave diving.

One of the top locations for cave diving in the world is in the ‘cenotes’ in the Yucatan Peninsula, Mexico (see photo above). The water is still, there is barely any current, it’s freshwater, and you can see over 50 metres ahead of you. The water is still because it comes from rainwater that has seeped through limestone slowly and has been filtered naturally.

This particular cave is a seasonal cave, so it’s made up of water from monsoon rain flooding through in a few months of the year, so its quite dirty with sediments and silt and it is zero visibility. There is strong current and the water is cold. So nobody would be dive in waters like this except for in specific rescue or recovery situations.

It would be like diving in the dark at night where you can’t see your own hand in front of your face and you would be moving by feel of touch, so it is hazardous and dangerous with sharp rocks and potential entanglement hazards. It is also physically exhausting to have to swim against the current.

Question 2: What can go wrong during such a rescue operation? 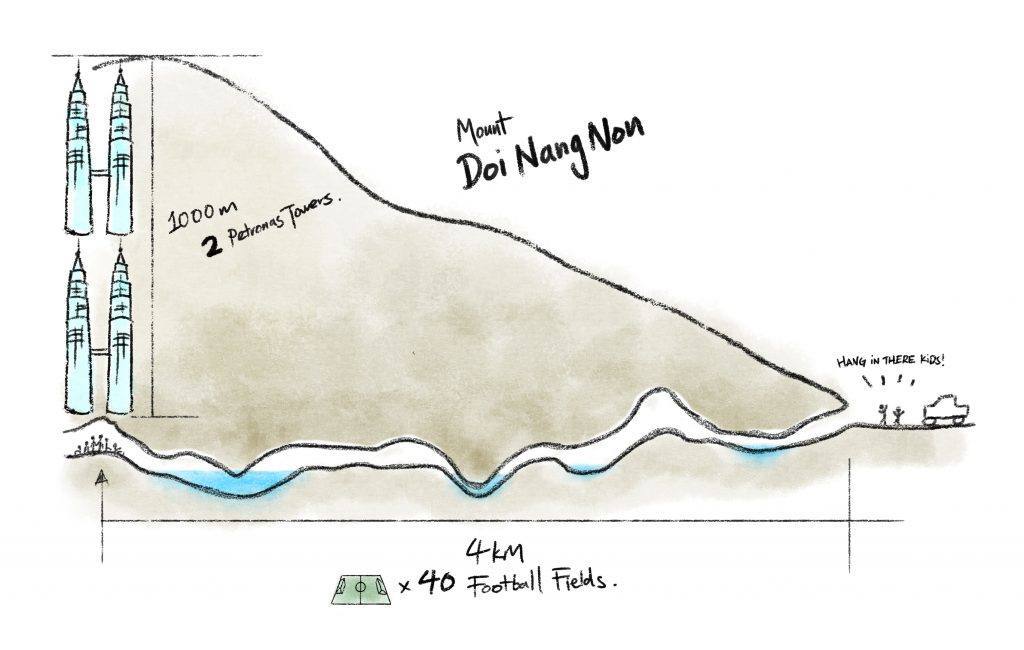 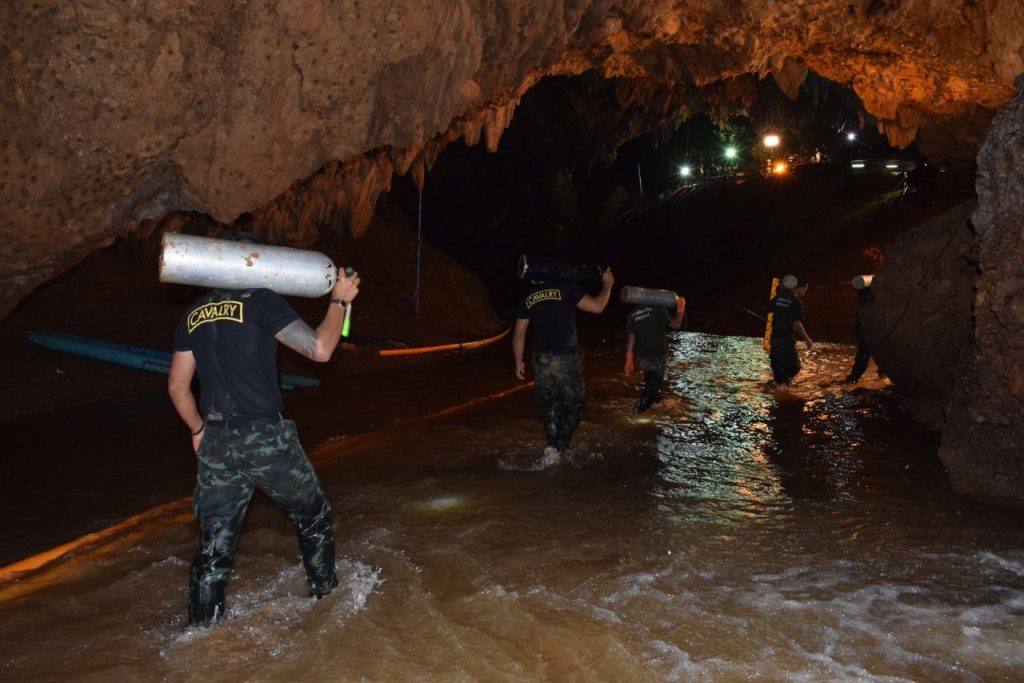 Many things can go wrong:

(2) Divers have to plan according to the amount of time they have underwater which is limited to how much they exert underwater swimming against the current, how much air is in the tank, and how much nitrogen their body would absorb from the air. Many of these variables can change depending on weather & water conditions.

(3) Parts of the cave could collapse, lines could break, equipment could fail, the air in the bigger cave camp bases could become hypoxic (low oxygen levels).

(4) People can panic and do very irrational things, and plans can go terribly wrong.

(5) Rescue teams could miscommunicate or coordinate wrongly or there may be too many teams not working together. There were over 90 on the dive rescue team, 40 local and 50 overseas with many more hundreds of volunteers assisting with carrying and food and so on. So it was a BIG operation, but from the photo coverage of their base camp, the area actually looked surprisingly well organised.

Question 3: What kind of measures or procedures are taken when oxygen is low during a cave dive?

This question hasn’t been very clear in media and can mean something very different to divers and non-divers.

The media keeps referring to “oxygen tanks”. However, scuba diving is commonly done on air tanks.

The air in the scuba tank is normally just compressed air. 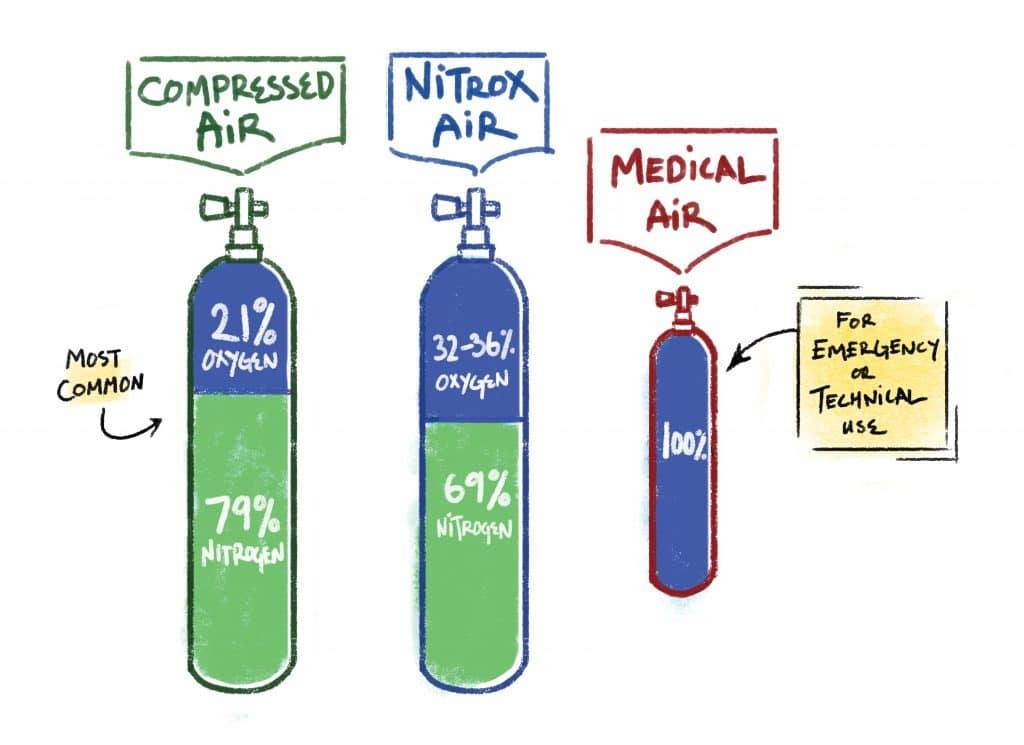 Compressed air is normal breathing air that is 21% oxygen, and 79% nitrogen.

A tank with a higher level of oxygen, a 32% or 36% oxygen mix, is often used for scuba diving as well, and is called Nitrox or enriched air and allows us to spend longer time at depth.

How about an emergency kit?

Divers can also have an oxygen tank that is part of the diver emergency kit. This is normally medical grade 100% oxygen that can be used as treatment in case of a diver emergency.

Technical divers (divers trained for diving deeper and staying down longer, using mixed gases) may use 100% oxygen tanks underwater at six metres or shallower to off-gas (remove nitrogen from the body) so they can safely ascend without facing DCS (decompression sickness).

Often misquoted in the media!

As you can see, the media often quote from one another and use the words ‘air’ and ‘oxygen’ interchangeably. So this question could be referring to air levels or oxygen levels, and it could refer to the air levels and oxygen levels above water in the cave or underwater while scuba diving.

As an example of this, one media source quoted that a rescue diver died because he ran out of air, while in the next paragraph, the same media source said his oxygen supply had run out. 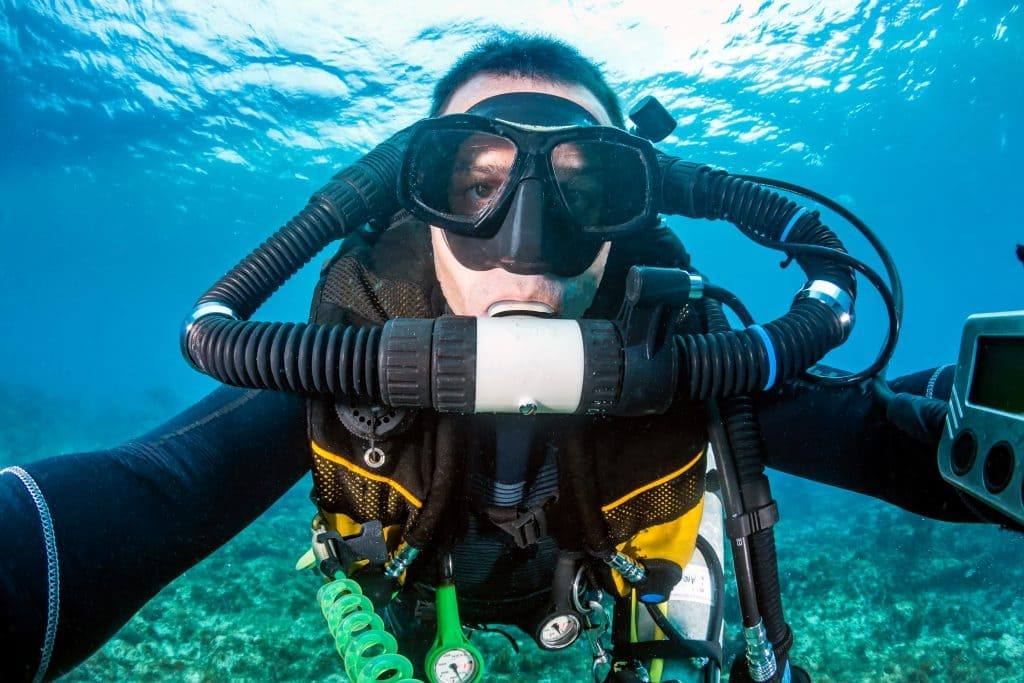 A scuba diver with a closed circuit rebreather (Photo: Shutterstock)

While diving on rebreathers, if the rebreather dive computer or oxygen sensor or equipment doesn’t work properly, the air can become low on oxygen as the rebreather head unit doesn’t inject more oxygen into the air to return it back to 21% oxygen. Qualified technical divers are trained to regularly check their dive computers and O2 sensor readings to reduce incidents of lower oxygen.

The cave where the 12 students were trapped became low on oxygen as the oxygen levels decreased over time.

The cave where the other volunteer rescuers were using as a base camp also faced decreased oxygen levels as rescuers work round the clock.

For underwater diving scenarios, to avoid a low-on-air situation during a cave dive, a rule of thirds is used, one third to go in, one third to come out, and one third reserve, so divers have to be disciplined to stick to this rule, to always have enough air and to plan their dives properly and to know when to go back or end the dive if circumstances have changed. Also, divers must be trained not to panic and to control their breathing and stay calm to not use up more air than they normally would.

When a cave is low on oxygen above water, like at the rescue mission, they considered actions like allowing less people in, setting up an intake pipe with oxygen or air access, and bringing in more oxygen tanks to increase o2 levels back up to 21%.

Question 4: What’s the difference between diving and cave diving? 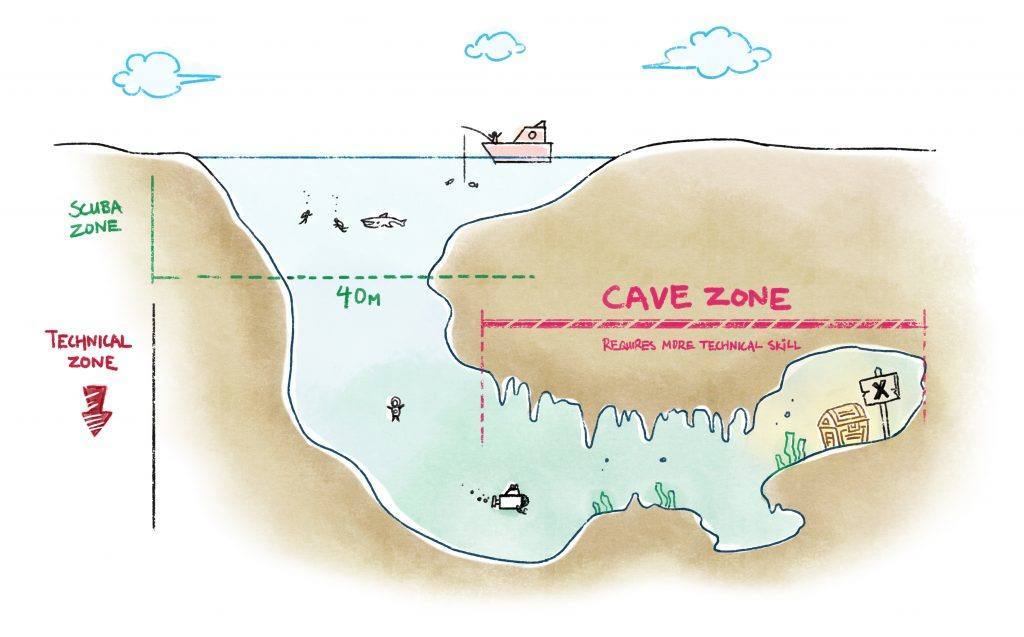 Scuba diving normally refers to recreational diving, that is diving no deeper than 40 metres or diving where decompression stops on the way up is not required or where there is no obstacle overhead to block your route to the surface.

Technical diving is deeper than 40 metres, or where decompression stops are required, or diving with mixed gases, or where there is an overhead environment, such as cave diving.

For cave diving, because you cannot just surface and breathe in an emergency, more training is required, more equipment and planning is also required. You will need underwater lights, proper air planning, and more durable diving equipment for the hazardous environment.

Question 5: Are there any courses on how to survive such a scenario? 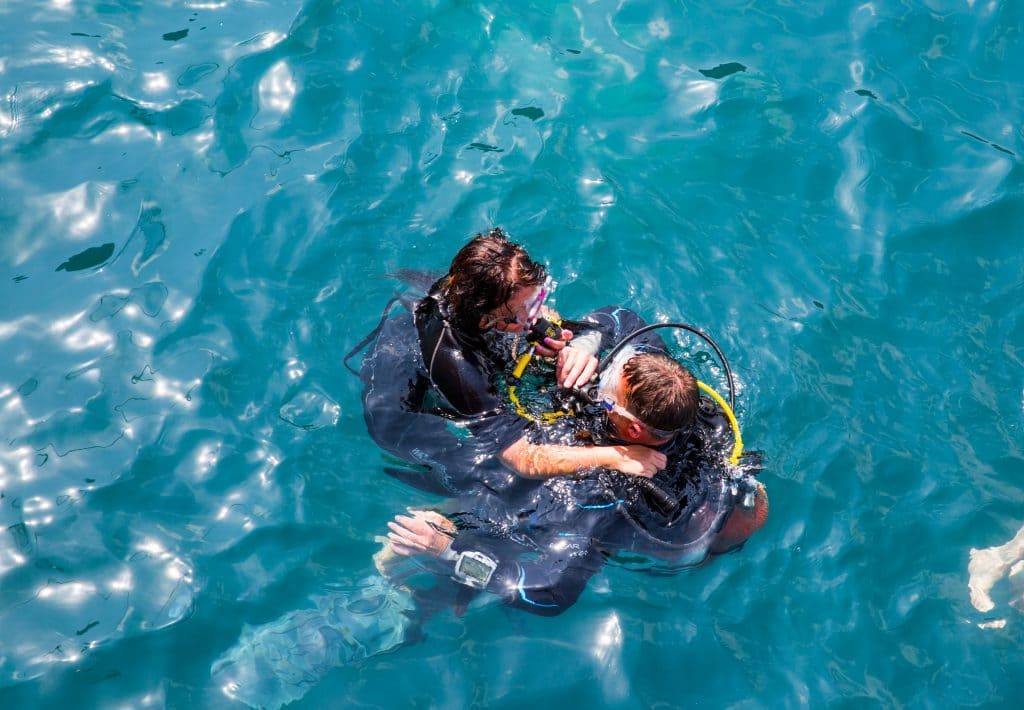 There are MANY courses in Brunei that people can sign up for to be better prepared for such a scenario.

For starters, they can learn how to swim by taking swimming lessons or learn to scuba dive by taking diving classes, such as Poni Divers (@ponidivers).

Being in a cave requires use of lines and climbing equipment, so they can go rockclimbing at the local rock climbing gym, such as Up Climbing Centre (@up_climbingcentre).

Overseas, they can go potholing or caving (exploring in caves) with a certified guide or instructor.

There are also various survival guide resources available that discuss how to survive in such scenarios by keeping a level head, and how to stay safe and secure, and how to make the right decisions.

However, the most important one probably is prevention. And that is to try to prevent some thing like this from happening.

The easiest way to do that is simple things like always find an expert to bring you into new places and to be familiar with the hazards of your activities and to inform people where you are going.

Other than that, stay fit and take up some adventure sports for that day when you may need some of those adventure skills!

We’d love to hear from YOU!

Is there a question you would like to ask Poni Divers? Drop us a line in the comments section below or reach out to us via social media.

Poni Divers has as part of its mission, an initiative to give back through educational and sponsored programmes. Its focus is on increasing the awareness of the wonder and beauty of the marine ecosystems and to encourage others to protect and maintain these fragile environments.