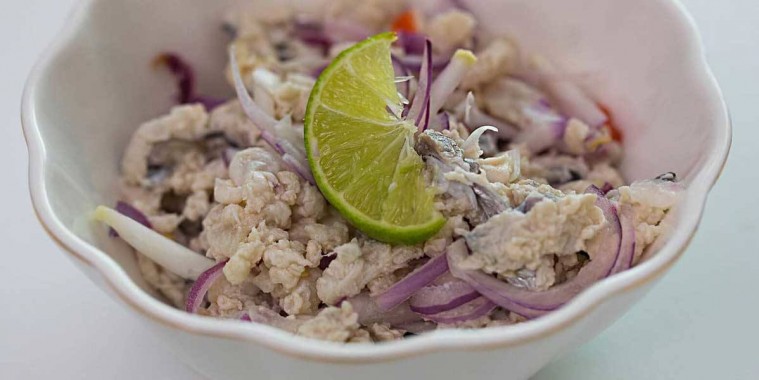 Raw Fish Salad (Umai Ikan) is a simple dish that you can prepare on your own. The good news is you won’t even have to turn on your gas stove or oven.

However, if you are watching this video overseas, you may use any other fish. We recommend using semi-firm, white-fleshed ocean fish such as sea bass and red snapper. Where possible, avoid using fatty fish such as salmon and tuna.

Ideally, the best fish to use would be Temanong (Indian Mackerel). However, at the time of filming, this fish was not available in the local Brunei market. This was why we opted for Tengiri (Mackerel).

In Brunei, this refreshing dish of fish marinated in citrus juice dish is commonly known as ‘Umai’. Some call it ‘Lawar’, another name used by Sarawakians. In Sabah, it is often referred to as ‘Hinava’, whereas in Peru, Spain and South America, it is called ‘Ceviche’.

Though it’s not always possible, fresh-caught fish makes the best ceviche. Otherwise, buy the freshest fish possible at the market. It’s the single most important thing. Fresh fish smells like the ocean. It shouldn’t be stinky.

Another important thing is having a really sharp knife. There is an art to the slicing of fish for Umai. Slices need to be thin and consistent. This is to ensure that there is no bone in the meat and that cooking time is even.

Keep in mind, the thicker you slice the fish, the longer it will take to marinate them in the citrus juice. 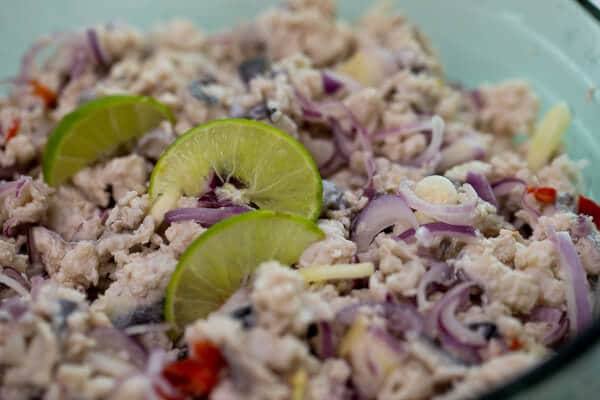 How to prepare the dish?

1. Fillet and debone the fish. Thinly slice the fish into 1-2mm thickness. Thoroughly wash the fish, and let it drain on the side.

2. Prepare all the shallots, garlic and chili. Combine with the fish in a bowl.

3. Squeeze the lime juice and add to the bowl. Enough to barely cover the fish.

4. Add salt to taste and mix everything together. Leave to rest (cook) in the bowl for 30 minutes to 1 hour.

Things to keep in mind:

1. When you get your fish home from the store, it’s best to put it over ice and store it in the fridge until you’re ready to use it. Not only does this keep the fish fresh, it will also make for a better-tasting ceviche when you serve it. Aim to make the ceviche the same day you buy the fish. If you’re working with an especially large fillet, keep half of it over ice while you work on the other half.

2. When making this dish, it’s important that the fish slices are evenly sized so they marinate evenly.

How to enjoy this dish?

We hope the Neue community enjoys preparing this dish at home! Besides YouTube, you can also watch more ‘Easy Recipes’ videos on IGTV via @whatsneue.