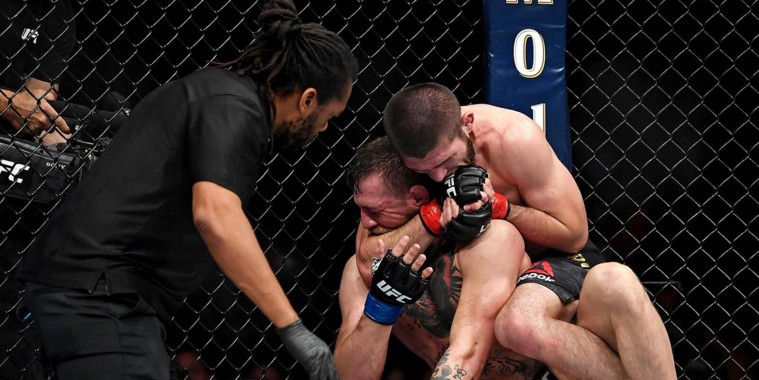 You know when it shocks former boxing heavyweight world champion Mike Tyson (@miketyson), it has to be something extraordinary!

The aftermath of last weekend’s Ultimate Fighting Championship (UFC) 229 match between UFC Lightweight Champion Khabib Nurmagomedov and Conor McGregor will go down as one of the most insane moments in sports history.

‘Iron’ Mike Tyson, who infamously took a big bite out of Evander Holyfield’s ear, in the third round of their title fight in Las Vegas, had this to say:

That said, Neue has compiled a countdown of some of the most insane moments in sports history:

I know … you’re probably asking yourselves, “What? Why is this ONLY ranked as number 10?”

While this may very well be still fresh in everyone’s minds, Neue would argue that it is NOT the most shocking.

Why? The brawl was contained by security in a relatively short time.

Khabib showed up at the post-fight news conference. While he didn’t take any questions, he did make a lengthy statement before leaving.

Read on to see other moments in sports that trumped what the world witnessed last weekend. (Sources: ESPN, LowKickMMA)

An ugly fight truncated the Australia’s 89-53 victory over the Philippines in the FIBA Basketball World Cup qualifiers at Philippine Arena.

Nine Gilas Pilipinas players and four Boomers were thrown out of the game after the third quarter bench-clearing brawl.

The melee began at the 4:01 mark of the third quarter with Australia, 79-48, in control when Gilas Pilipinas guard Roger Pogoy and Boomers wingman Chris Goulding got tangled up on a drive.

Australia’s Daniel Kickert responded with a forearm on Pogoy, after which Jayson Castro hit Kickert.

Chaos broke loose after that, with both teams getting in on the action.

The flying kick former Manchester United striker Eric Cantona (@ericcantona) launched at Crystal Palace fan Matthew Simmons, moments after being sent off at Selhurst Park on January 25, 1995, still resonates as one of sport’s most extraordinary events. The Frenchman was fined £30,000 and banned for nine months for his actions. (Source: BBC)

On March 17, 1991, the Blackhawks and the Blues met at the Chicago Stadium for a late season Norris Division clash. However, tempers would boil over during the ensuing 60 minutes, resulting in one of the most brutal series of brawls in modern National Hockey League (NHL) history.

The highlight of the whole event was Dave Manson calling out Scott Stevens to fight one-on-one at center ice. Manson proceeded to fight Stevens while the entire crowd went nuts. Another great image was coaches Brian Sutter and Mike Keenan having a fiery argument at the benches mid-brawl. (Source: Hawk Talk Hockey)

The 2003 American League Championship Series, one of the hardest-fought playoffs series in baseball history and arguably the pinnacle of the rivalry between the New York Yankees and Boston Red Sox.

The series may be best remembered by casual fans for a series of incidents in Game 3, highlighted by Pedro Martinez grabbing 72-year-old Yankees bench coach by his enormous head and throwing him to the ground. (Source: ForTheWin)

Houston Texans wide receiver Andre Johnson and Tennessee Titans cornerback Cortland Finnegan each were fined US$25,000 but avoided suspensions by the National Football League (NFL) after slugging it out in the fourth quarter of the Texans’ 20-0 victory. Fights don’t always happen in the NFL, and they’re not often viewed in a positive light, but this was one of the most memorable moments of Johnson’s career. (Source: Foxsports)

What happened on April 30th, 1993 was one of the most horrific scenes on a tennis court that one could ever imagined.

Monica Seles, then in her prime, was playing Magdalena Maleeva in the Quarter Finals of the Hamburg Open. During a break between games, a man called Gunter Parche, an obsessed fan of Steffi Graf, ran from the middle of the crowd and stabbed Seles on her back between the shoulder blades.

While Seles felt a sharp pain shoot up in her back, it took her a while to realize what had actually happened to her. The spectators pounced on the perpetrator and within minutes the security guards whisked him off the court.

It was later found that the man who stabbed Seles had ‘psychological issues’. The man told the court that he felt remorse and did not have intentions of killing Seles. He only wanted to hurt her so that she would not play for the next two weeks. Hence the court, citing his mental imbalance and remorse did not put him behind bars and just gave him a two year suspension.

It was the scream heard ’round the world as Nancy Kerrigan let out an agonising cry after she was clubbed in the leg in an infamous 1994 assault, but much of the infamous video, including the seconds leading up to the attack, has rarely been seen.

In the footage shot on January 6, 1994, Kerrigan is seen warming up at an ice rink in Detroit, blissfully unaware of the grim fate that was just a few moments away.

Her rival Tonya Harding was also in the Motor City, competing against Kerrigan in the US Figure Skating Championships.

The camera was rolling as Kerrigan wrapped up her routine and left the ice, walking through a curtain unaware that her life was about to change forever.

The attack was orchestrated by Tonya Harding’s then-husband Jeff Gillooly, who hired a goon to knock Kerrigan out of commission and guarantee his wife’s place at the 1994 Winter Olympics in Lillehammer, Norway.

Harding has always denied any involvement in the attack. The acclaimed new film ‘I, Tonya’ offers a sympathetic account of her life. (Source: InsideEdition)

In the 2006 FIFA World Cup final between France and Italy on July 9, 2006, Zinedine Zidane – playing in his last-ever match as a player – wandered past Azzurri defender Marco Materazzi.

Millions worldwide watched on as the Frenchman exchanged words with the Italian.

It earned Zidane a red card as he marched furiously past the World Cup trophy. (Source: ABC)

This was by far one of the ugliest scenes in boxing’s history.

In 1997, Tyson bit off more than he could chew when he twice sunk his teeth into Holyfield’s ears.

It was a disgraceful and shocking act that left the world watching in disbelief; amid uncontrollable rage, Tyson bit a chunk out of Holyfield’s right ear during their 1997 bout at the MGM Grand Garden Arena in Las Vegas. He was disqualified at the end of the third round.

However, it’s comforting to know that the two have put all that behind them, and are now friends.

They even made an amusing television advert about ‘The Bite Fight’, during which Tyson calls at his former rival’s house to present him with a piece of his ear in a jar of formaldehyde. (Source: ESPN)

Do you agree with Neue’s list? Do you have any recommendations on what should have been added to the list? We’d love to hear from you. Drop us a line in the comments section below or reach out to Neue via Facebook or Instagram.