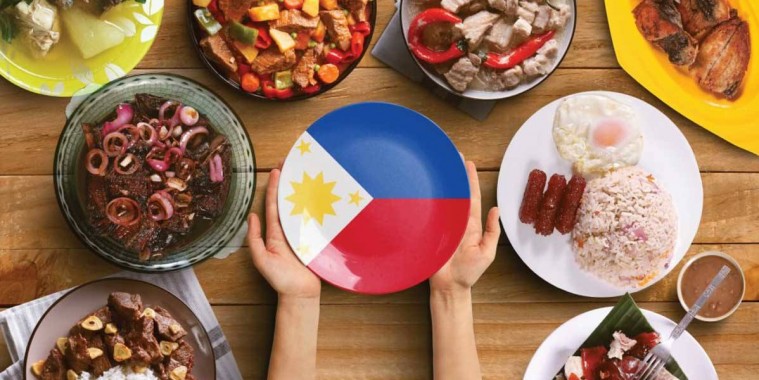 Taste of the Philippines in Brunei: 6 must-try dishes

The smell, the sight, the taste and even the touch of food can take anyone back to a certain place or moment in their life.

There is a fairly large Filipino community in Brunei Darussalam, which according to a report, numbers to around 21,000 including their dependents. That said, OFWs (overseas foreign workers) from the Philippines and their families can check out these eateries to help alleviate cravings they may have for food that remind them of home.

And for those looking to sample Filipino dishes, this article might prove to be useful as well.

There are a few restaurants here that serve Filipino dishes. All of the restaurants mentioned in this article serve the 6 dishes featured. So let’s get into it! 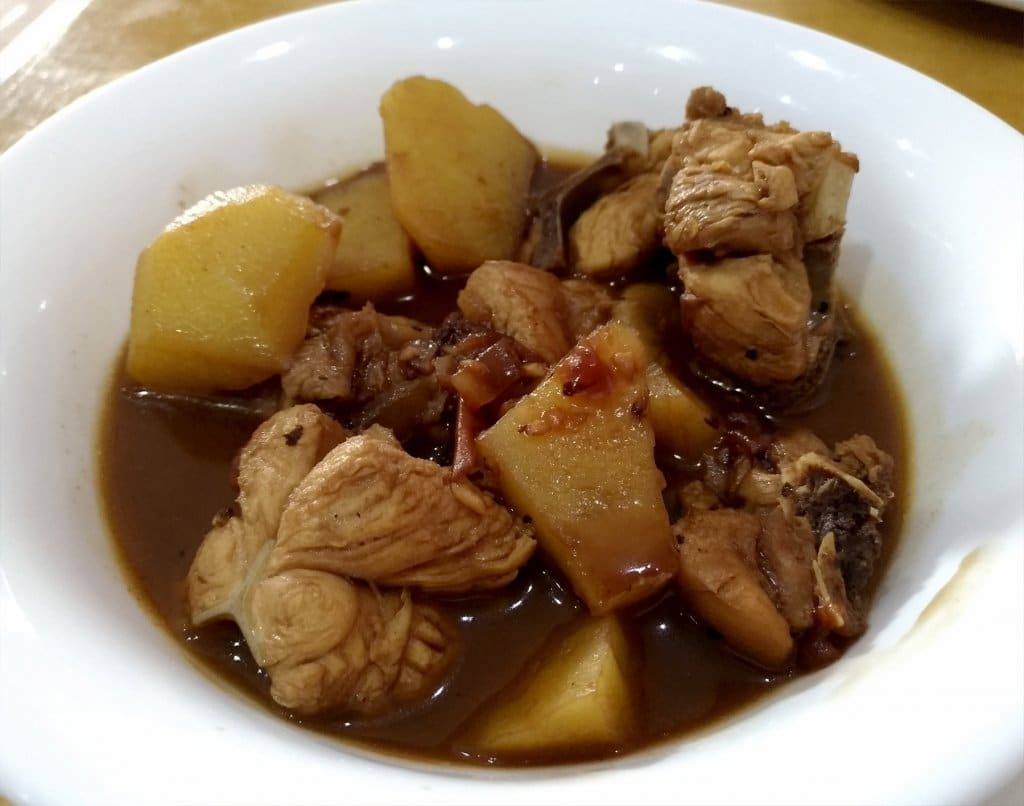 A little bit of a background first on adobo. It is considered by many Filipinos as the unofficial national dish in the Philippines and it is one of their most popular dishes as well. It is commonly made with chicken and the ingredients such as soy sauce, vinegar, garlic, bay leaves and black pepper. The meat is usually marinated first with the ingredients mentioned and then browned in oil and simmered in the marinade.

This particular adobo dish from Suria Azlan was very sour from the vinegar. The strong vinegary taste even overpowered the saltiness of the soy sauce. It is a dish with sharp and bold flavours, mainly from the way it is prepared and cooked. It is not for everyone, but for those who loves sour food, this is certainly a dish you should try! 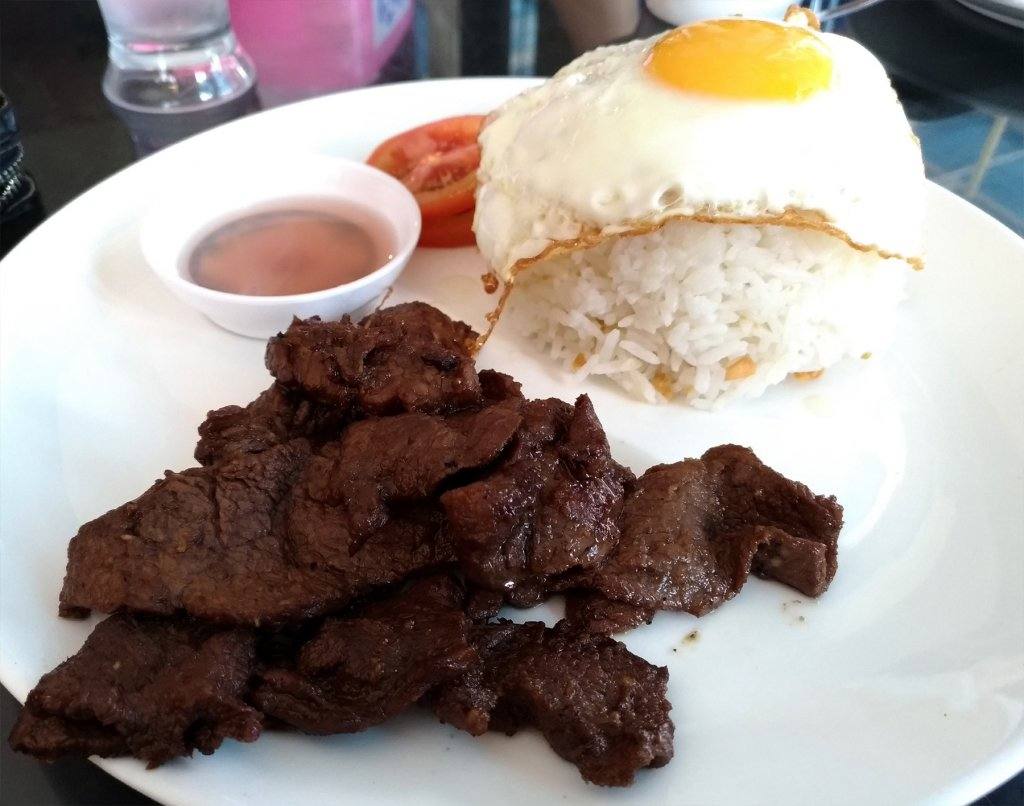 For this article, I particularly chose tapsilog, which is short for tapa + sinangag + itlog. Tapa are thin slices of beef meat that are either dried or cured with salt and spices and they are quite similar to beef jerky. The meat is then either grilled, sautéed or fried and voila, breakfast is served! Just like we have nasi lemak, they have silog.

Pictured is the tapsilog from Semporna Enak. The dark color of the meat comes from the marinade and it does mainly influence the taste. It’s salty and it’s seasoned nicely and you can taste the spices on the meat. They are not too dry and some were more tender than others. The garlic rice goes well with the meat and I love the fried garlic bits on the rice. The vinegar sauce on the side adds that “oomph” to the dish as well. 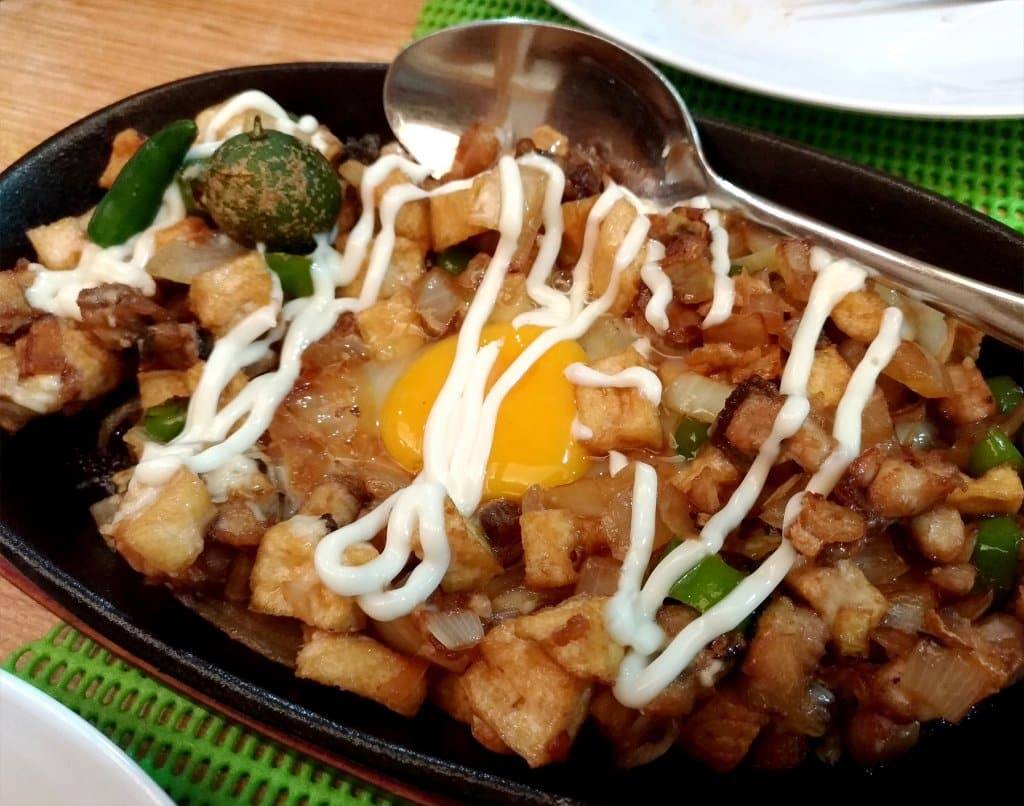 Traditionally, sisig is made with meat that have been boiled, broiled and then grilled with kalamansi or some kind of citrus to give it that acidic flavor to balance out the richness of the meat. However, there are several ways to serve this dish, some uses sizzling plate and egg and some does not. Though typically, sizzling plate is used and the Filipino restaurants in Brunei put egg on their sisig.

Oh my goodness, bangus sisig is probably my most favorite of the 6 listed dishes mentioned in this article. Bangus is also known as milkfish and it is regarded by some as the Philippines national fish. Bangus has a distinct flavor and it is not a neutral bland white fish. It has a mild taste and juicy, meaty texture. I love this fish, especially cooked this way! Also, bangus is a bony fish but for sisig, they are deboned and only the meat is used.

Pictured above is the bangus sisig from MK Restaurant. I just love how the nicely seasoned bangus meat is on the sizzle plate and we mix it together with the runny egg to give it that “creamy” taste. It’s delicious! Black pepper is apparent in the dish and if you want some tanginess, just squeeze some calamansi juice on the sisig. However, MK Restaurant somehow uses tofu with their bangus sisig and it can feel like the tofu is competing with the bangus because they almost look the same and more in quantity … I just wish they would use all bangus meat instead since that is the star of the dish. 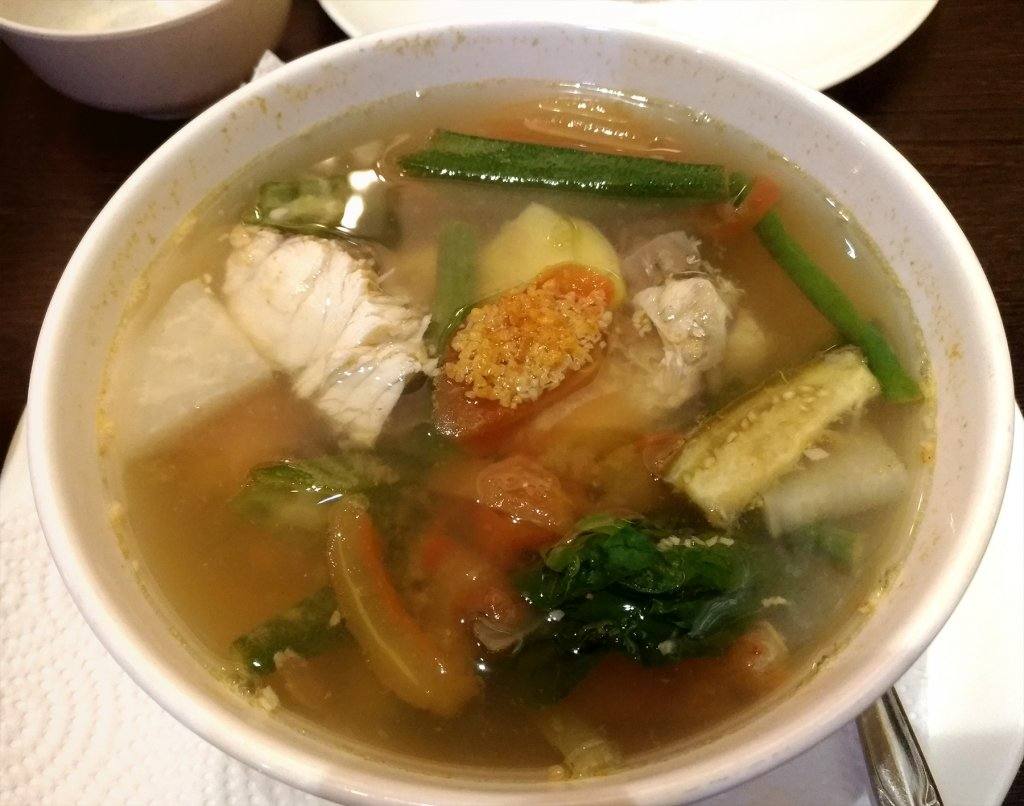 Sinigang is a classic Filipino comfort food. This soup is traditionally made with tamarind thus why it is both sour and savory. It can be made with seafood (usually fish and shrimp) or meat.

Pictured is the seafood sinigang from Diners. It is specially requested to include both fish and shrimp so that it is close to the original because you only get to choose one of the seafood or beef from the menu. So including both fish and shrimp will add to the original cost (additional $2). The taste of the soup is as expected. Bursting with strong flavors, especially from the tamarind, I find it surprising that the sourness wasn’t overwhelming! I actually kinda like it. It’s one hearty soup indeed and there is a lot of different kinds of vegetables in the soup. 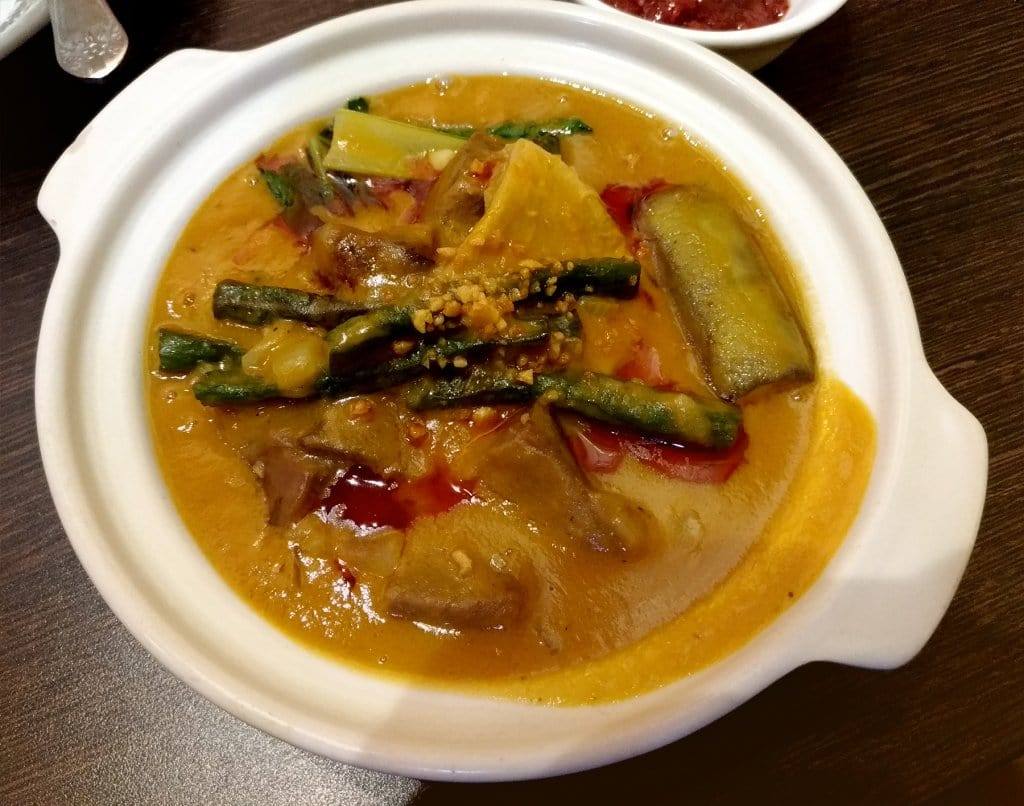 Kare Kare is a classic Filipino slow-cook stew, usually using oxtail and/or ox tripe, with thick deep yellow peanut sauce and some vegetables. It is traditionally unsalted and is usually served with some shrimp paste instead to make up for the lacking saltiness in the stew itself.

Pictured above is the Kare Kare from Diners. I just love the color of the sauce! It’s vibrant and it looks super appealing. The sauce itself is quite rich and creamy and you can definitely taste its peanut-based.

The sauce has a sweetness to it and on the side, bagoong (fermented shrimp paste) is provided (see photo below). 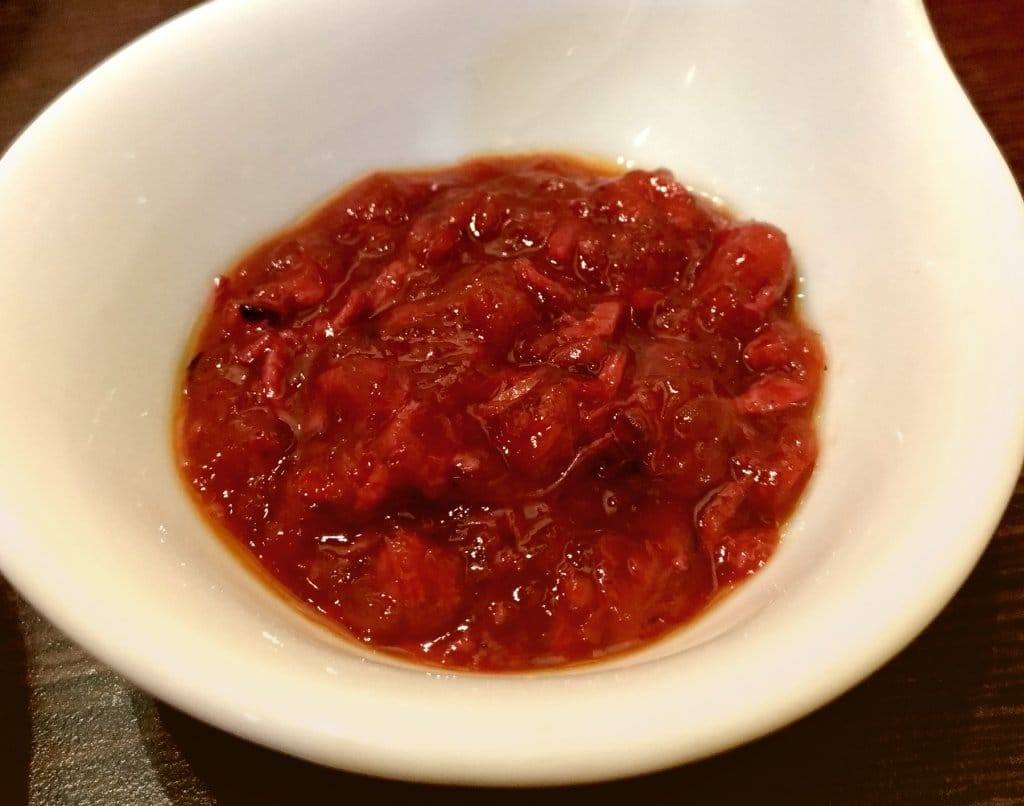 The bagoong is to make up for the lack of saltiness in the stew and honestly speaking, it mixes really well together. The contrasting flavors of the sweet and creamy peanut sauce and the shrimpy, saltiness of the bagoong complements each other. They don’t use oxtail for this dish but instead, there are beef chunks and tripes in the stew and a mix of vegetables as well.

This dish is unique to me and for those who thinks it’s similar to satay or any Malay dishes with peanut sauce… No, it’s not the same. There are no crushed peanuts in the sauce at all and it is really smooth. You have to try it yourself to know what I’m talking about! 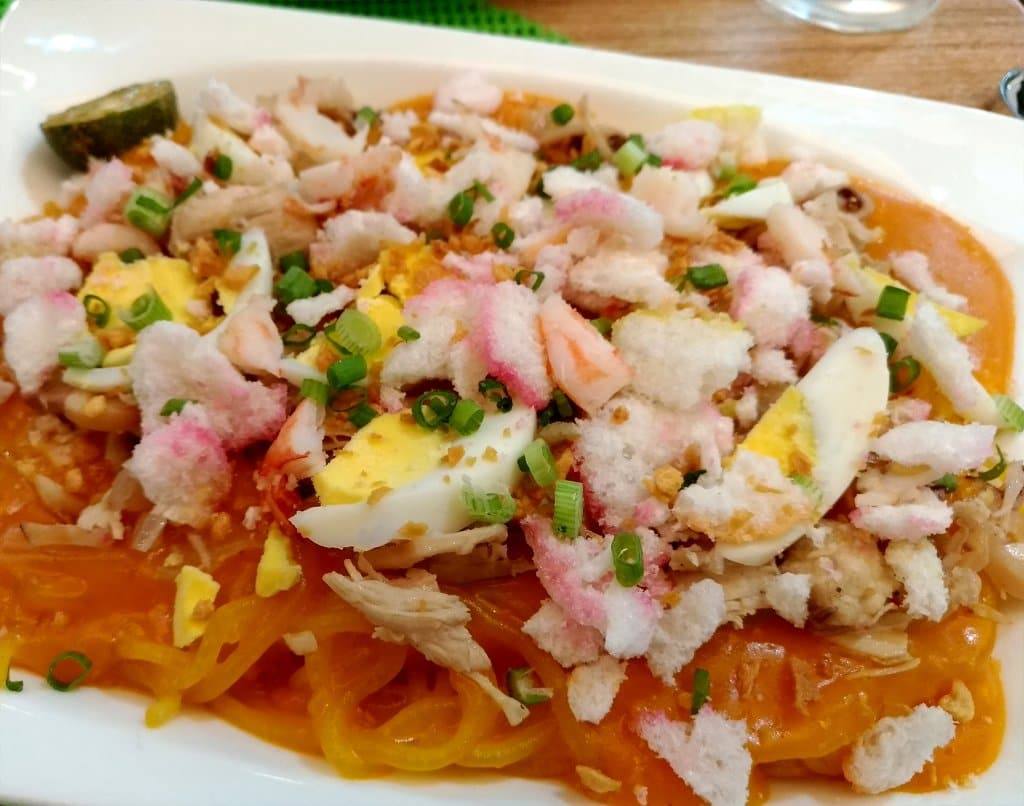 Pictured above is the pancit palabok from MK Restaurant. I really love this noodle dish. It’s nothing like I’ve ever tasted before from other Asian noodle dishes. I love the type of noodles they’re using; it is clear, orange in color and it has a nice, chewy texture. The sauce itself is rich and thick in consistency and it mixes well with the noodles. Combine that with all the toppings and its a harmonious mix! The toppings include chicken and prawn pieces, chopped hard boiled eggs, spring onions and crushed crackers. Not sure if there are any smoked fish flakes though because I don’t taste any fishy element.. You guys just gotta try this particular dish from this restaurant because it’s their specialty.

Where to get these dishes? 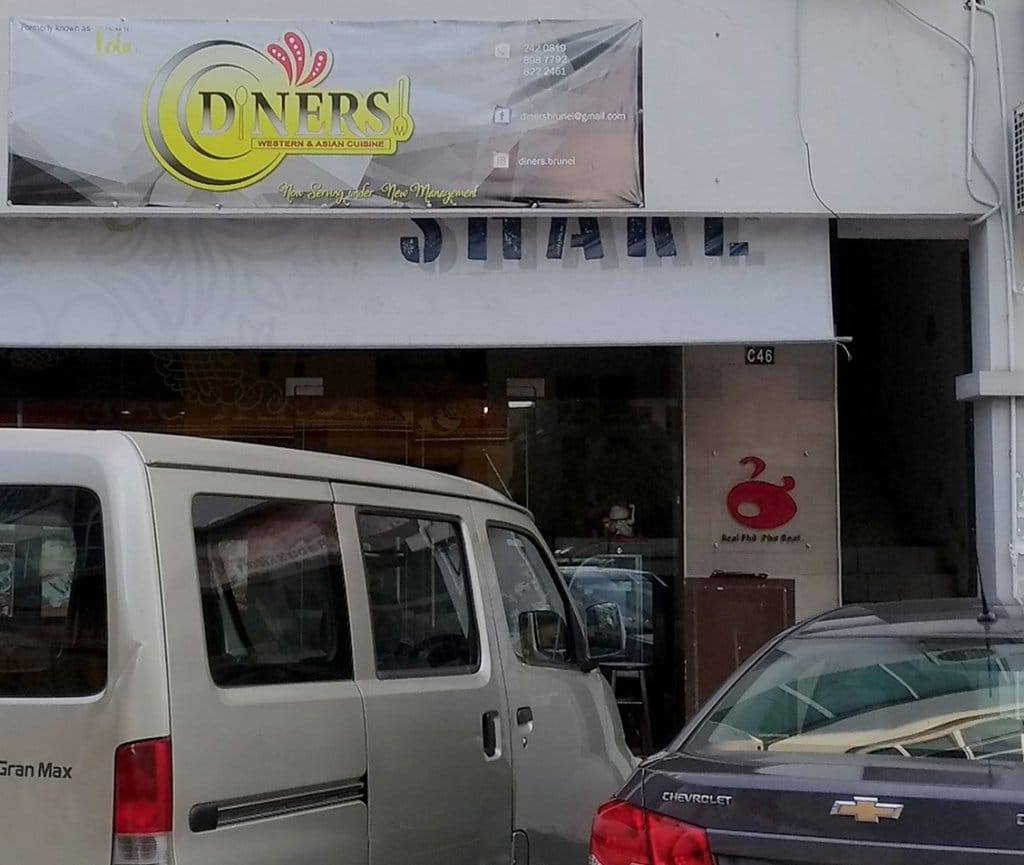 Diners was previously known as Cocina De Lola and they specialize in both Western and Asian dishes. However, they have a lot of Filipino food on their menu because they originally promote themselves as a restaurant that serves international food with a twist of Kapampangan cuisine. Kapampangan is one of the provinces in the Philippines. The menu is still the same as back then and they are more towards the “high-end” side. I love the food there and I’m convinced they have one of the better Filipino food here, in terms of taste and implementation. They are located at Unit 46, Ground Floor, Block C, Gadong Central, Menglait I. It is the same building as Babu’s Kitchen or Sushi Tei. 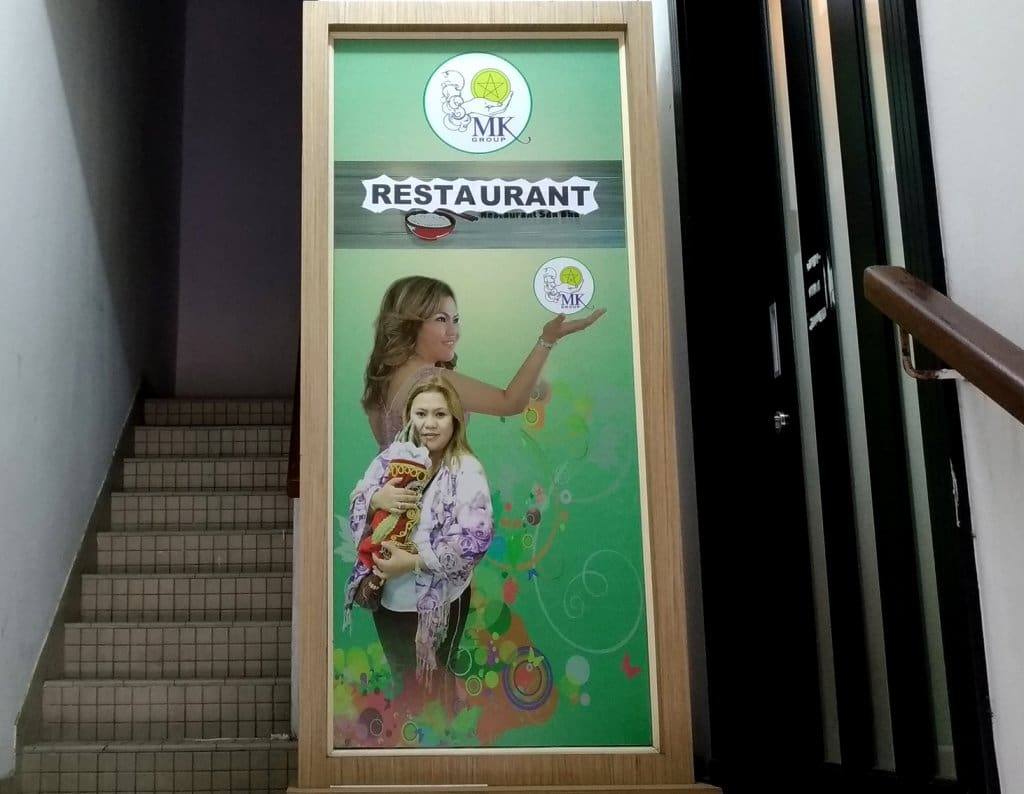 This is the restaurant that I discovered while I was strolling around Gadong, haha. Their location is not obvious if you don’t know about the place since they are located on the first floor and there is only a small whiteboard sign next to the staircase! They mainly serve Filipino food and this restaurant is owned by an actual Filipino. Their menu is not as extensive as the others, but they do have all the 6 dishes mentioned on this article at least. They are located at Unit 4, 1st Floor, Abdul Razak Complex, Gadong. It’s the same building as Shabu Me Restaurant and literally the stairs next to it leads up to the restaurant above. 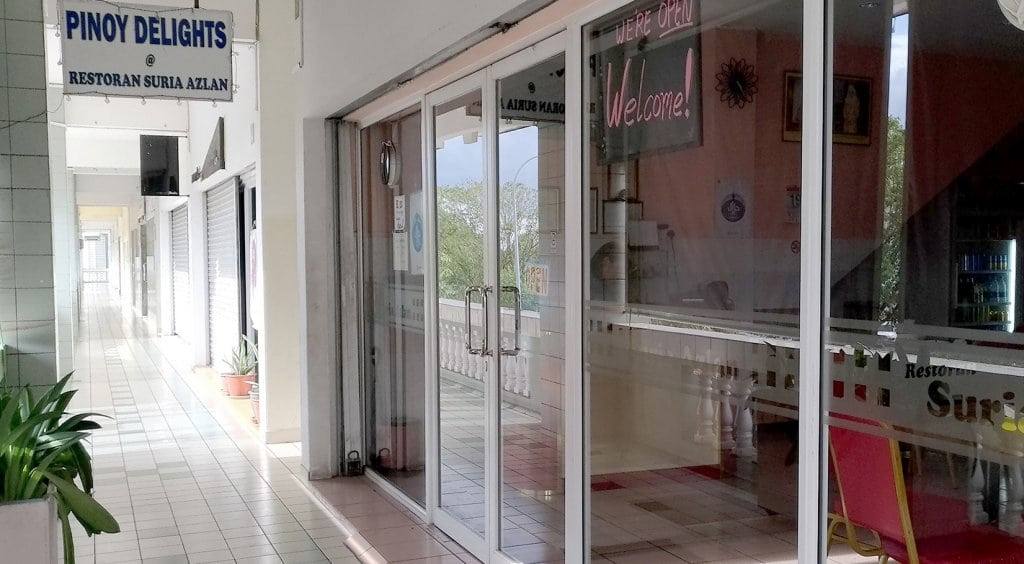 Suria Azlan is probably the oldest Filipino restaurant I know that existed in Brunei… With a name that one think might be a Malay restaurant, lol. It is another Filipino restaurant that is secluded and not so obvious in its location. They supposedly specialize in Pinoy delights and they do have an extensive menu of Filipino food. However, I find some of their food to be “knockoff” versions of the actual thing. Thus, why they are probably cheaper compared to the other 2 Filipino restaurants mentioned. They do still use the core ingredients for their food, but sometimes the implementation is slightly different than the actual Filipino dish. For example, their tapsilog (pictured below) was way off by using shredded beef instead and cooked it in like a rendang style. I’m not saying it’s not good, the beef was delicious actually but not as a beef tapa. Although they do have a lot of other Filipino dishes to offer. They are located at B1, 1st Floor, Block B, Shakirin Complex, Kiulap. They are literally above Ceri Café and you can’t miss that banner! 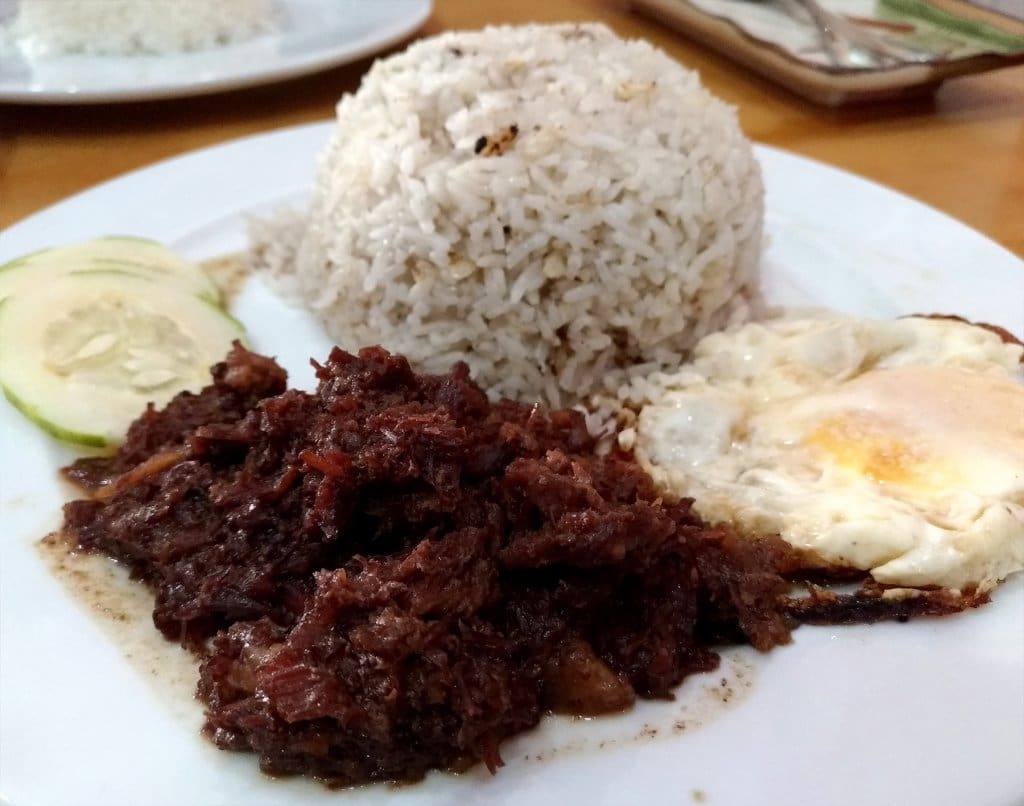 I hope this article is informative and useful for you guys! I have so much love for Filipino food and there are not many places we can get them in Brunei. I’m just glad that I discovered these restaurants. Probably some of you may not have known about them. I sincerely hope that you would give these Filipino cuisine a go. It could be a new experience that you’ll enjoy! What’s great about these restaurants is that they are ALL HALAL and both Muslims and non-Muslims alike can enjoy their food. Also, please bear in mind that these dishes might be modified from the original recipe in ways that they have to replace the non-Halal ingredients with Halal ones or even omitted them. Furthermore, each restaurant may have their own version of a particular dish as well.

*Editor’s note: This story was written in collaboration with our local friend from Da’ Food Enthusiast who you can follow on Instagram by clicking here.