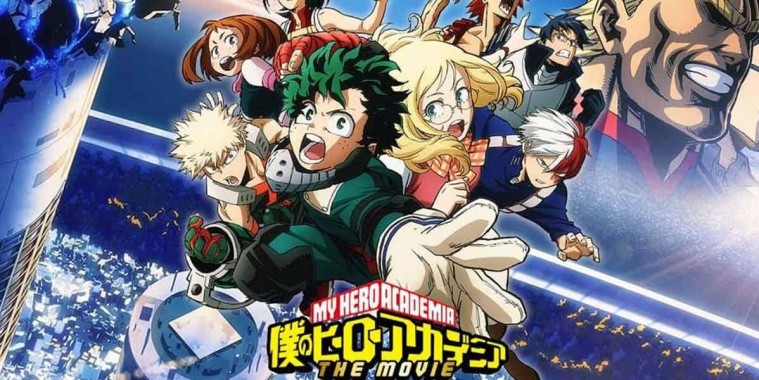 What does it take to be a hero? If you’re not a fan of anime, Neue is confident that you’ll be by the time you finish reading this article about a new breed of superheroes.

In a market saturated with comic book adaptations and reboots of well-known superheroes, it’s not easy to stand out against a crowd of bodysuits, neon glowing limbs and fancy gadgets, but that’s precisely what My Hero Academia has been doing ever since its season premiere back in 2016.

Based on the manga of the same name, written by Kohei Horikoshi, My Hero Academia follows a fairly typical shōnen premise: the story takes place in a universe where 80% of the population has “quirks”, or supernatural powers due to human evolution, thereby making them the norm in society. However, the show’s protagonist, Izuku ‘Deku’ Midoriya, is born “Quirkless” and yet feverishly dreams of becoming a superhero.

(Warning! Spoilers ahead for all 3 seasons of My Hero Academia!)

So what’s the appeal of My Hero Acadamia, you ask? Read on to find out. 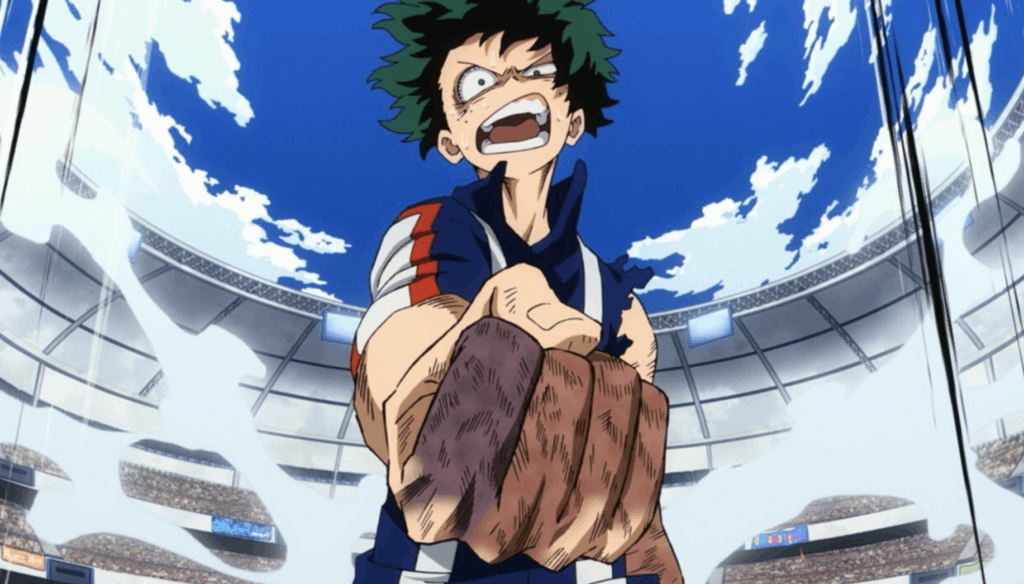 Deku, bullied and ostracised due to his lack of a quirk, inherits one from his idol, Japan’s number 1 hero, All Might, who shares a secret with him: that his body is deteriorating, and he needs a successor to pass on his quirk, known as ‘One for All’.

While the ‘chosen one’ trope is easily recognisable across a multitude of genres, Deku’s character doesn’t start off strong, or even all that remarkable (in fact, he’s known to be a crybaby and an overly devoted fanboy to all heroes, but especially All Might).

And over the course of three seasons, he repeatedly destroys his body as he learns to adopt ‘One for All’ as his own.

There is no instant gratification; we don’t see a sudden jump in Deku’s abilities, and even after three seasons, his body is still only able to handle 8% of ‘One for All’. In fact, after his hard-won victory against Muscular to save Kota in season 3, Deku is warned that he may not be able to use his arms anymore if he gets injured in the same way two to three more times.

But herein lies one of Deku’s strongest traits and the mark of a true underdog: he’s never given up.

It’s easy to root for a hero that not only has to work extremely hard just catch up with everyone else, whose experiences span over a decade, but Deku’s hero ideals also stem from an unshakeable belief that being a hero meant giving help, even when it isn’t asked for. Even as his worldview gets reshaped the more he learns about being a hero, he’s adamant that the most important thing about being a hero, is being able to save the people within his reach.

Deku might not be everyone’s favourite hero; he’s reckless, over-analyses every move in a fight and there’s drastically divided opinions on his character design (I personally like the Christmas theme he has going on), but it’s hard to deny the charm of a protagonist that understands the weight of responsibility entrusted upon him and does his absolute best to keep rising to the occasion with grit, strength and the power of friendship. 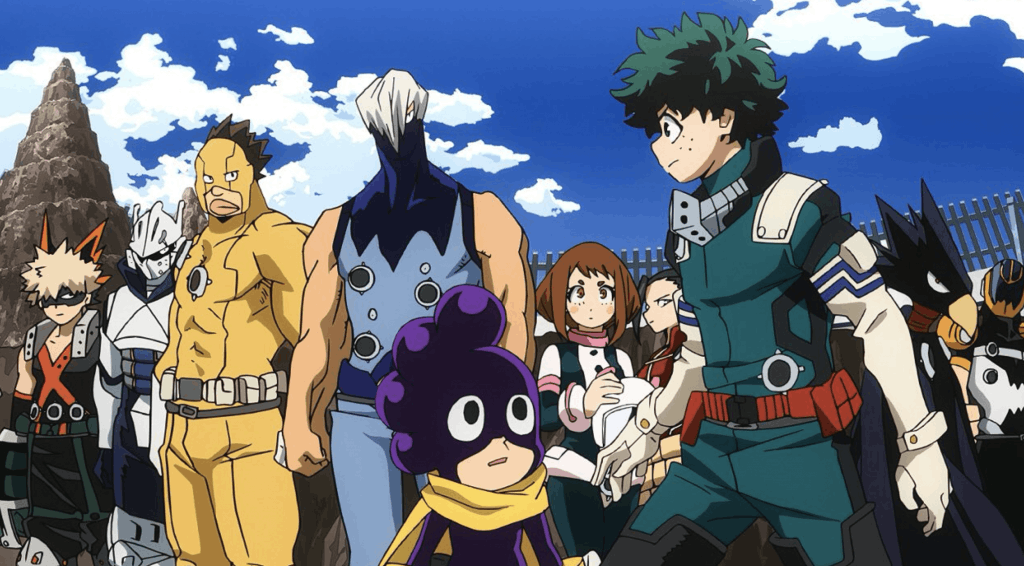 Unlike superheroes in the Marvel and DC universes that most of us are accustomed to, heroes in the show are not a rare entity, and neither do they work alone without any governing authority. There’s an established system in place, and heroes work in tandem with the police force, rescue operatives and a government body that monitors their work and conduct.

Pro heroes working in the industry are usually based in agencies that operate according to their designated zones; there’s a lot to be said for a society that functions around normalising superpowers as merely an extension of one’s abilities.

This concept is explored as early as high school among Deku’s classmates: every exam they face forces them to learn how to cooperate to achieve a goal, and the training camp in season 3  is a great portrayal of how necessary it is to be able to work together as aspiring heroes.

And while teamwork is a prevalent theme in nearly every superhero show and movie, much of that was contained among the supers themselves.

But in a world where having superpowers is akin to merely having another talent, pro heroes and other parts of the community in My Hero Academia can actively work together for society’s betterment, with the only distinguishing factor being their job titles. This becomes all too clear during the provisional license exam arc, where they’re forced to work with strangers to carry out fight and rescue exercises together, similar to real-life work situations.

On the other hand, the villain Hero Killer: Stain is perhaps the only lone wolf we see in the series, and while things don’t end well for him, his twisted ideals have influenced others to find those with the same mindset to carry out his will to eradicate (fake) heroes. 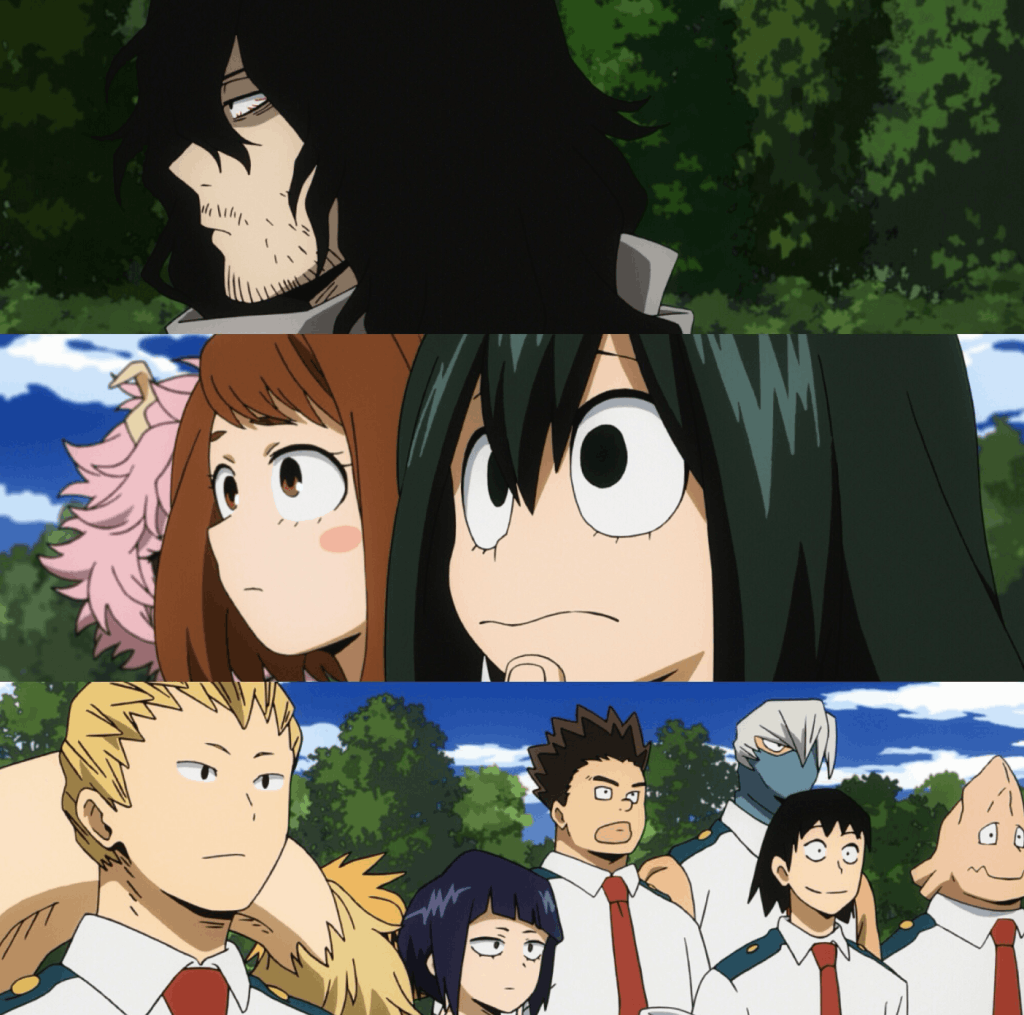 One thing that most superhero movies have shown us is that being good doesn’t necessarily mean being lawful; rules don’t seem to apply to the likes of Captain America or Superman if it meant being able to rescue people and win fights, and that’s okay… Right?

Not in My Hero Academia.

When Deku and his classmates Tenya Iida and Shouto Todoroki defeat Stain, they are informed by the Chief of Police Force that their actions are considered as breaking the law and the three should receive punishment for using their quirks as weapons without having a license to do so. While they’re granted amnesty and the incident gets covered up, their heroic efforts receive no valid recognition.

And in the Bakugou rescue incident, we see the same three, along with two other classmates Eijiro Kirishima and Momo Yaoyorozu tiptoeing the line between breaking the rules and trying to save their friend, and they get hardcore resistance from the rest of the class from the very first time Kirishima voices the plan.

Their teacher and pro hero Aizawa ‘Eraser Head’ reprimands them upon return, and tells them that if it weren’t for the loss of All Might as a hero, the entire class, with the exception of Bakugou and two others who were injured, would have been expelled for either going along with the plan, or not stopping their classmates from carrying it out.

It’s a sobering outlook on how heroic abilities are treated less like gifts from the gods and more of a heavy responsibility that is governed by strict codes and morals. Heroes are held accountable for their actions, and aspiring heroes, though their hearts might be in the right place, are still susceptible to punishment if they have no permission to carry out heroic conducts.

(It’s like if Captain America: Civil War happened in a more amicable manner, with less people sneaking in snide remarks at one another.) 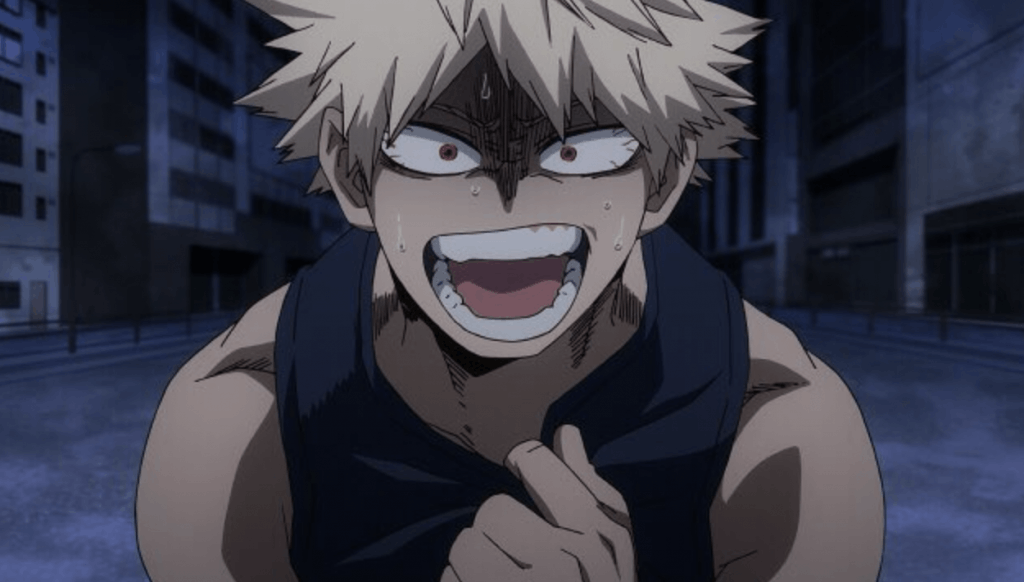 Bakugou’s emotional outburst during the ‘Deku vs Kacchan, Part 2’ episode in season 3

A superhero show just wouldn’t be one without over-the-top fight scenes and a whole lot of yelling, which would require quite a number of characters, but My Hero Academia itself boasts a pretty huge cast, with 19 of the characters being Deku’s classmates, as well as Eraser Head, All Might, other supporting characters as well as the villains, with more new faces to come, if the end of season 3 is any prediction.

It takes skill to maneuver around the many characters while still keeping the audience interested in the show, but My Hero Academia does an admirable job at doing simple characterisation in all the right ways. Deku plays a huge role in this, because we see the way other characters develop and grow according to his interactions with them, whether that’s directly, in the case of Bakugou, Todoroki and Iida, or indirectly, like Kirishima and Yaoyorozu.

And if season 1 was laying the groundwork for character development, then season 2 and 3 were when the fruits of the labour began to manifest themselves; a number of the background characters get a quick spotlight, like Tsuyu Asui during her internship and Yaoyorozu during the provisional license exam. And tellingly, one of the central characters in Deku’s life, Bakugou gets a harrowingly emotional redemption arc that comes to a climax over a series of small developments throughout the anime’s run.

It’s safe to say that one of the biggest draws of My Hero Academia is the fantastic ensemble cast itself; after all, with a multitude of characters to choose from and new ones to look forward to, there’s definitely a Best Boy and Best Girl for anyone out there.

At the end of the day, My Hero Academia is a shōnen anime, which means it’s chock full of adventure, fights and inspiration, cranked up to 11.

But it’s executed skillfully; its pacing is slow enough to allow you to keep up with the chain of events and fast enough to not be bogged down by unnecessary information. In fact, Deku’s obsession with heroes serves as a great exposition tool, and also as a way to lighten the mood when things get too serious. Humour is evident in nearly every aspect, and the numerous battle scenes are a dream to watch. (Video above shows the fight scene between All Might and All for One.)

At the core of it all, though, is this desperate earnestness to do good for others that the characters embody so well, most of all Deku, who’s dreamt of being able to do so ever since he can remember. It’s a journey that’s filled with heart, inspiration and self-sacrifice, and My Hero Academia excels at using Deku to portray those emotions through his character growth over the course of the anime’s run.

My Hero Academia reminds audiences why we started rooting for heroes in the first place, and with the current landscape of jaded, cynical superheroes struggling with their inner demons in a broken world, it’s liberating to be able to watch a show filled with characters who see a flawed society and yet face their challenges head on, pushing beyond their limits with tenacity and determination. 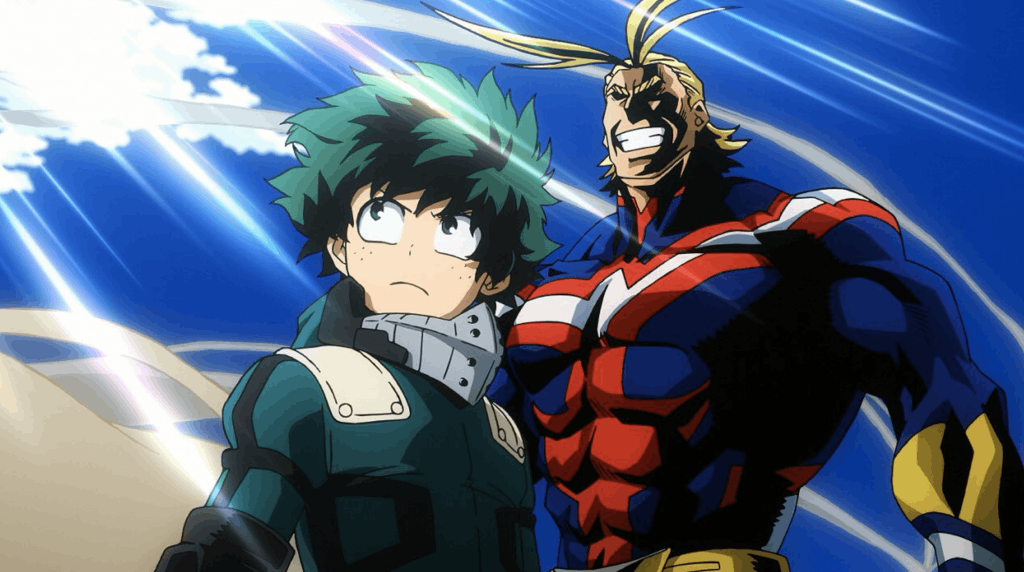 With the release of My Hero Academia: Two Heroes the movie, will you be catching it in cinemas? Are you experiencing withdrawal symptoms from the recent end of season 3 and looking forward to the fourth season already? We’d love to hear from you! Let us know why you think My Hero Academia is great in the comments section below. You can also reach out Neue via social media on Instagram or Facebook.