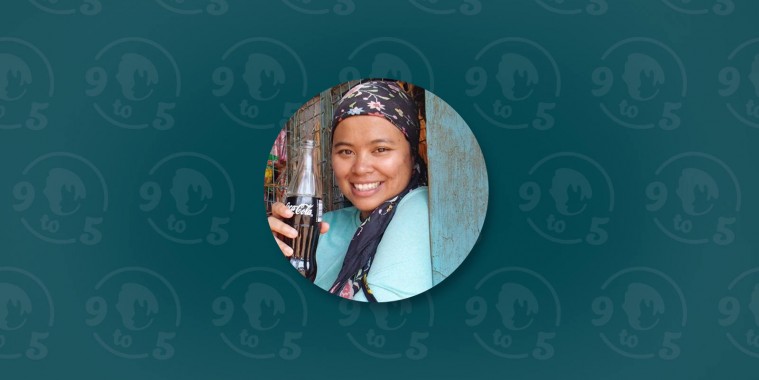 Neue (@whatsneue) is embarking on a completely new and exciting form of content called “What’s Neue from 9 to 5”.

Today, Neue will be chatting with Huwaida (@ihuwaida) of @heartwrite.co.

1. What is one thing you’ve done that you’re most proud of?

Learnt how to be present with my parents.

2. Do you have a favourite book? Why would you recommend it to others?

I would say “The Little Prince” by Antoine de Saint-Exupéry. To me it’s a heartwarming story about love, life and freedom and people through the eyes of a candid young character, told simply and beautifully. I find it transformative, because you can’t close the book in the end without feeling a little more tender.

3. Which social media platform is your favourite? And why?

4. What’s one of your favourite memories?

I walked into the house one day and found my 3-year-old niece colouring in the living room. She took the time to glance at me and smile. It stopped me in my tracks, and even my breath turned captive. A more genuine and blissed smile I have yet to see.

5. If you could spend a day in someone else’s shoes, whose would they be? Why?

Nelson Mandela. I wonder what it is like to feel such deep compassion.

6. What does success mean to you?

A greater good for a great number of sentient beings.

Embed into our physiology and/or mind controlled.

8. What has been your best moment this year (so far)?

Today someone proposed to be part of one of my love projects (can’t say which, but I do love most of the projects I create and am part of). I was also randomly called by a friend out of the blue for lunch, which is beautiful in itself, but she asked me out so she could intro me to a new friend whom she thought I would get on really well with. I mean… aww… ?

9. Knowing what you know now, what advice would you give your 18-year-old self?

Hahahahaha. Nothing, but I would love the chance to go back and love her more.

1. What songs would be featured in a soundtrack about your life?

“(I’ve Had) The Time Of My Life” from the soundtrack of the movie, “Dirty Dancing” and “Accidentally Kelly Street” by the Australian indie pop group, “Frente!” I think that’s it.. The list would be too long if I continued haha!

2. Which Disney princess do you best identify with?

Promotional Swedish poster for the 1981 film, Peter-No-Tail (Courtesy of Wikipedia)

Hmmm… I don’t think I identify with any. Can I be a cat? Like Peter-No-Tail (Swedish cartoon from a few generations back). Darn this is hard! Can I be Bones? Hmm… princess… ???… none! They should do a Disney movie on Mahatma Gandhi. I would be Gandhi.

3. If you could relive one day of your life, which day would you pick?

Both easy and hard to answer. I’ve been journalling since young and have kept most of them until now (okay, I lost all of the records before age 18).

Something about jotting down your life makes even the most mundane moments vivid, so I have many days I would enjoy reliving.

The sad and painful ones so I can relearn the lessons.

The decisive ones so I can see the moment I decided to change course in life and who I would be as a person.

The joyful ones for obvious reasons.

Once, I went to my mum’s room and found her sleeping. I was moved to kiss her cheek and quietly did so, then left the room.

I knew she was awake.

And she was just pretending … to remain asleep.

4. If you could have a superpower, what would it be?

Listening, both to the said and unsaid.

5. If you could ask a question to anyone in the world, what would it be?

Sometimes I meet strangers who quickly become friends, even for the length of a bus ride or maybe a ticket line.

I would tell them about a hypothetical comet that’s heading towards our planet. When the comet hits us, we would all be destroyed in 7 minutes.

But let’s say that we knew the day would come, and that everyone realised that life on earth as we knew it was going to perish.

The authorities have issued every individual with a band to teleport them to a space ship that is hovering in our atmosphere.

In that 7 minutes, every individual would have to use their teleportation bands to signal: (1) whether he or she chooses to board the ship or stay on earth, and (2) if they choose to teleport, why pick them. Because you see, we are 7 billion people in all but there is only enough room for 1 billion.

Then I would ask, “What would you have chosen and why?”

I’m pretty sure I’ve asked all my closest friends this question.  The best answer I got so far was from a then 7 year old. However, that’s another story entirely.