Marry for Money, Love or Durian?

Ten million Thai Baht (about 428,000 Brunei Dollars) in cash and a durian empire would be given to one lucky man who wins the heart of the 26-year-old daughter of a Thai tycoon. 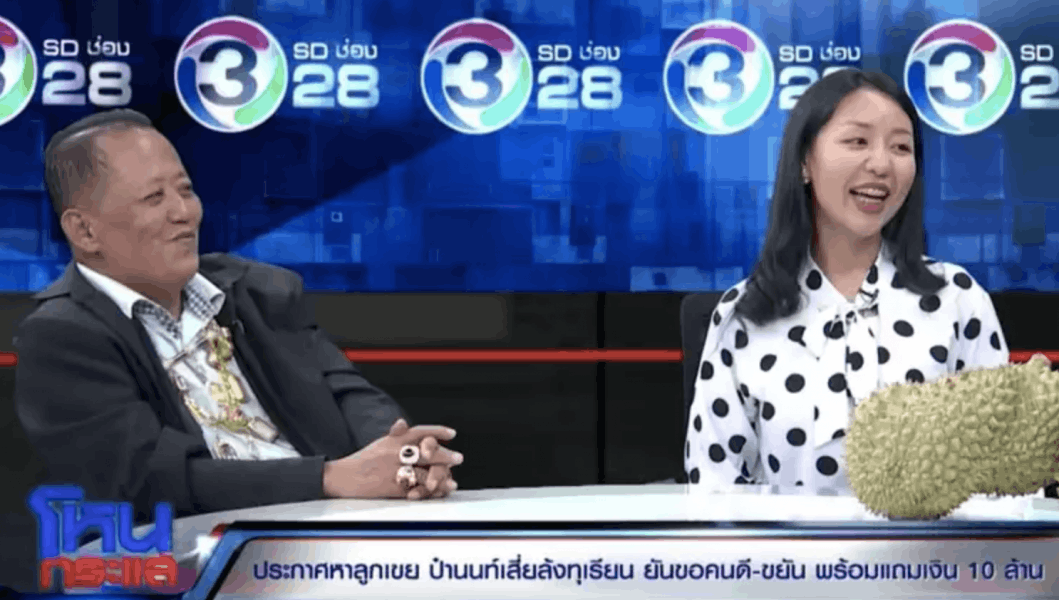 Interested applicants were invited to take part in a tournament, where they would have to work at his durian plantations for 3 months and until there was only 1 man left standing.

Within a few days, more than 10,000 men had applied for the role. (No surprises there!)

According to Bangkok Post, Anont runs two durian markets in the southern Thai province of Chumphon. He has been in the durian trade and export business for two decades but is ready to retire.

“The man who will join my family must be good and must not be a gambler. Importantly, he must be hard-working and truly love my daughter,” said the father, who had been in the durian business for two decades.

Anont claims he decided to take such extreme measures for two reasons – (1) He believes Kansita is becoming too old for marriage; and (2) He wants to retire and focus on his hobbies. 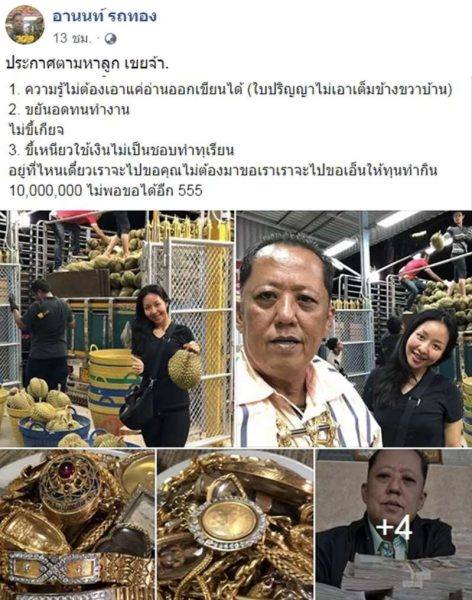 His daughter, Kansita, told Bangkok Post that she had no issue with her father’s decision to advertise her hand in marriage on Facebook.

“At first, I thought my dad was joking but it turns out he’s seriously looking for a son-in-law. My siblings and I respect his decision,” she was quoted as saying.

A decent man who works hard and loves his family is good enough for her, she said.

Her elder siblings already had families. “My dad may fear he won’t know his son-in-law in this life,” Kansita said jokingly.

Kansita graduated with honours from Assumption University and has a Master’s degree from Sun Yat-sen University in China.

What Do You Think?

However, if you’re now seriously thinking of being one of the lucky suitors vying for hand of the Thai durian tycoon’s daughter, tough luck!

The following week after Arnon made the unusual public announcement on Facebook, he told reporters that he was CALLING OFF the challenge.

According to a report by AsiaOne, the Thai businessman said that the public’s interest had become too disruptive to his family and business.

He said that he needed time to sift out “the one” from 10,000 (and counting) potential suitors.

Not The First Dad To Make Such An Offer

Gigi with her partner, Sean. At right is Gigi’s father, Cecil Chao (Photo courtesy of SCMP)

Cecil Chao, a wealthy real estate developer, made headlines around the world in 2012 when he offered 500 million Hong Kong dollars (roughly $86 million Brunei Dollars) to any man who succeeded in marrying his daughter. However, there was a catch – the man would have to win over his lesbian daughter and make her straight.

His daughter, Gigi Chao, was soon bombarded with thousands of marriage proposals from across the world.

However, in a letter to her father published that was published in two Hong Kong newspapers, Gigi said she said understood it may be “difficult for you to understand, let alone accept” how she could be romantically attracted to a woman.

She writes: “I do love my partner Sean, who does a good job of looking after me, ensuring I am fed, bathed and warm enough every day, and generally cheering me up to be a happy, jolly girl. She is a large part of my life, and I am a better person because of her.

“I’m sorry to mislead you to think I was only in a lesbian relationship because there was a shortage of good, suitable men in Hong Kong.

“There are plenty of good men, they are just not for me.”

According to a CNN report, the flamboyant Hong Kong tycoon has said that the proposal is now off the table.

What do you think of this story? Would you marry for love or money? Let us know in the comments below.