It is indeed encouraging to see a strong participation of over 200 vendors taking part in the country’s biggest showcase of local brands, the Brunei MSME Festival.

(For those who are unfamiliar with the term, MSME stands for Micro, Small & Medium Enterprise.)

The Brunei MSME Festival 2019 (previously known as Made in Brunei Market Fair) might contain the words ‘Micro’ or ‘Small’, but trust me when I modestly tell you that it is the size of 2 football fields. It is often misconceived as another conventionally-regular ‘food festival’, lay-people seeing how they’ve tied ‘festival’ to MSME, could leave a more-than-open enough space to the imagination.

Without digressing too far, MSMEs actually represent the sturdy-backbone of a nation’s economy; adding fuel to its growth, blossoming innovations, and job opportunities. It adds meaning upon the frequently-irking phrase, “support local”.

DARe (Darussalam Enterprise) back in June 2018 in a message to mark International Micro, Small and Medium Enterprises Day pointed out that MSMEs are a critical force in the global economy, driving innovation, economic development and job creation. In fact, over 90% of the world’s businesses are MSMEs, and in emerging markets, are responsible for 80% of newly created jobs.

“Within Brunei, the development of MSMEs is an essential component of Brunei Vision 2035, which envisions a dynamic and sustainable economy, with a per capita GDP that ranks among the top 10 in the world,” it said.

It should also be pointed out that DARe is the organiser of the 4-day Brunei MSME Festival, which will end this Sunday night (March 31).

Here are some of the vendors that caught my attention. (Be sure to say ‘hello’ to them if you’re visiting BRIDEX this weekend!)

Smile For The Camera!

Located in front of the “Carnival Games” tent is Visual Pro’s booth, where visitors can have their photos taken and featured on the social media pages of the Brunei-based photography service. The founder of Visual Pro, Saifulizam Zamhor, is an experienced photographer from the now-defunct English-language daily, The Brunei Times.

He has been featured in one of Neue’s past reports – 5 Must-See Photos that Prove Brunei is Land of Golden Sunsets. So be sure to have a chat with him while visiting BRIDEX this weekend. I’m sure that he’d be able to give you a few pointers on how you would be able to snap your next “Instagram-worthy” sunset shots.

Gaming in Brunei has preceded, if not grown together with other developing countries when it comes to gaming. But the main lacking component about the gaming industry in Brunei is that there are little to no game developers, or in the least, no platform for gaming development companies to grow. That stigma, however, has been broken by ItsyBytes.

Ikmalina Hakimah, or by her alias, ‘Kimmy’ founded the company back in 2013. Ever since then, the company grew, and alongside it – their games came about. From 2-D to 3-D games, entertainment and education. (Yes! Games can be educative too!) Their latest feat, a collaboration with Royal Airlines Brunei (RBA) last December. The project was to develop a VR 360° application for RBA’s latest ‘sky-lounge’, all that is left to say is that ItsyBytes is no long an ‘Itsy Bitsy’ Gaming Development company.

Heal The World With Bamboo 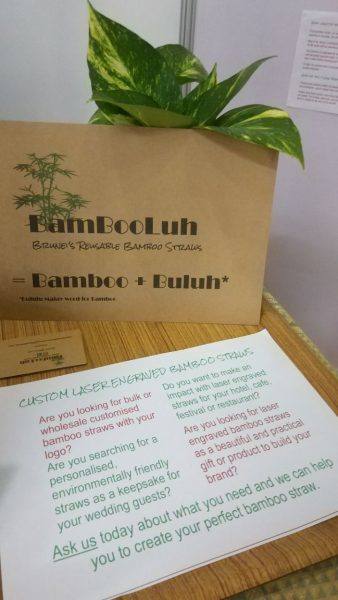 BamBooLuh is located at Booth Number 64 at Hall 2

Now, this caught us by surprise, after walking past a plethora of booths. (Some were really nice!)

For a moment I thought that I had been transported to a bamboo-filled forest. And for a split second , I thought this was an ‘Ayam Pansuh’ (bamboo chicken) stall. I was very wrong.

BamBooLuh’s booth was dressed head-to-toe in bamboo (which, I gotta’ say, was pretty creative).

“Now,” I thought to myself, “What were they selling?”

“100% Natural, Reusable & Biodegradable Bamboo Straws” overlayed on the signboard right in-front of me.

(Still thinking to myself, ‘What were they selling? — *hmm*).

Jokes aside, BamBooLuh, a company that advocates for a no-plastic-straw campaign, has (like its name) chosen to produce authentic bamboo-straws to help lower plastic-wastes. The only ones on the losing side are the pandas.

For The Love Of Art!

Be sure to visit the Doodles And Colors booth!

What do you get when you add colours to your doodle? A ‘Coodle!’ (I might have to edit that out!)

Brunei has seen an expansion towards the local art-scene. (Take for example, the 35th National Day Art Installation). An increase in acknowledgment for art from the public’s eye will mould future sightseers to think twice when calling a mural a ‘graffiti’.

Nazurah Usop, an ex-oil & gas operative turned full-time artist, was seated stationery behind her booth – like an eager merchant, waiting for some banter. Her wares – spread neatly on the table-top. According to Nazurah,  all the trinkets seen are made with recycled material. Perched above her, was a roll of paper, strung over the top; like her pseudonym, the roll was doodled with a palette worthy of praise by Michelangelo.

Like any artist, Nazurah keeps her personal-favorite pieces suspended on a wall, much like an art exhibition. (But they’re not for sale!)

It's our day one at the @bruneimsme festival. Do check out some of the amazing books written and published by our very own local writers. From inspiring islamic poems and stories, to some nail bitting real ghost stories, we've got some real page turners here. So be sure to drop by and say hello! Brunei MSME Festival 2019 28 – 31 March 2019 9 am – 9 pm Booth 68, Hall 2, Bridex Hall, Jerudong Brunei Darussalam #msmefestivalbrunei #msmefest2019 #sokongtempatan #belitempatan #makantempatan

In a period, decades before our illuminated-touchscreens, there was a time of great-unreliability. From whence an epoch, to jot a sentence with an ink-soaked quill would have taken us tech-savvies an instant whim. ‘Ah’, so now we are surrounded, encased by intangible sources of information, gripped and read with a slide of a touch. In orthodox, we read our e-books, eyes beyond-strained and dry, charmed by our device’s bewitchingly-metallic tinge; losing ourselves in waves, then oceans of data. “Nay I say, the flip of a paperback book, the smell of a newly-minted page, the mid-suspense of a mystery novel is why print-books will stay.” (Hey it rhymes!)

Lo and behold, DBookHaus, with a booth confined and I would say squished with bookshelves. Books from religion to self-help; from recipes to fiction, every bibliophile’s haven. If you’re a Bruneian writer looking to soar great heights, DBookHaus promotes local authors by selling their books at their store and events, and promotions via their social media. DBookHaus’s store can also be found on the 1st floor of The Mall, Gadong.

MSME Festival 2019 . Drop by to our booth at Bridex Hall 2 from 9 am to 9 pm. . . Brought to you by @darussalamenterprise @womennovationbwn

Last but very much not the least on this list is a family-run woodwork business with a lady-boss up-front (and her mom too!)

I was greeted by a very charismatic Dk Evie Pg Kiply, the owner of EVcroft Production.

What’s interesting about Dk Evie, who is a teacher by profession, is that she is a self-taught wood craftswoman.

“It’s amazing what you can learn by watching YouTube videos,” she said with a laugh, explaining that she picked up the hobby of wood work a few years ago. “Over the years, I’ve acquired even more wood machinery and equipment.”

(She told me that you could pick up any skill thanks to YouTube so long as you are willing to put in the work!)

As I glanced over some of the woodwork on display at the booth, I can attest that these are no ordinary woodwork.

You see, Evie and her team (family) personally work each ‘nook and cranny’ of Hexagonal-shaped furniture. (That’s right, a very much niche trademark right there!) They don’t just wax the furniture, they will customise it however you like! From designs to paint. (By the way, I would not mind having a chair that looks like the ‘Iron Throne’ from HBO’s “Game of Thrones”!)

Keep in mind that there are over 200 vendors participating in the Brunei MSME Festival. So be sure to visit as many booths as you can over the weekend!

Did you stumble upon an amazing product or service that was being promoted at the event? Do tell in the comments below!