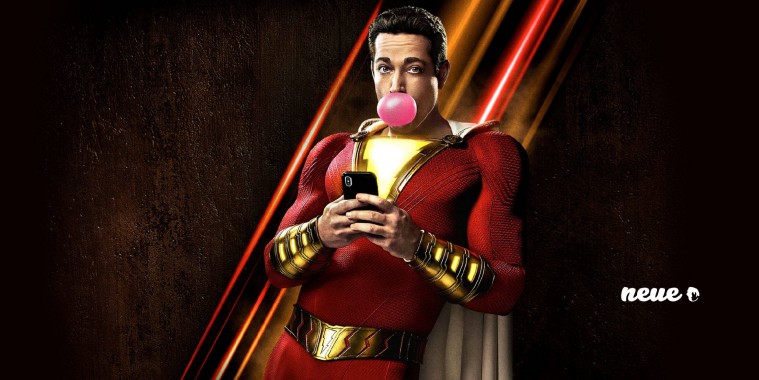 ‘Shazam!’ hurled bolts of lightning over to our cinemas last weekend (maybe that’s why it has been raining a lot lately).

Captain Marv – ‘The Big Red Cheese’, satirically given that nickname by fans of the old comic’s legacy – is donned in a skin-tight red suit.

I mean, what’s not to like about a boy being able to swap places with a powerful superhero with just a shout of a word? (Shazam’s the word by the way!)

The term ‘Cheese’ was given to the young Billy Batson (The Big Cheese himself) by long-running fans of the original comics. The name stuck and was used as a gag, but one of the reasons is that he (Billy Batson) perfectly captures just how different he was, compared to the other superhero franchises.

In the chaos that is Hollywood cinema, different personifications of ‘Captain Marvel’ have been flimsily thrown about by various big-shot companies. Here’s what went down:

(1) Fawcett Comics decides to release their very own version of ‘Superman’, the parody, caped-hero Captain Marvel was born. (on comics)

In the real world of constant throw-downs of lawsuits, the true bearer of the name ‘Captain Marvel’ is Fawcett Comic’s Billy Batson, ‘Captain Marvel’, ‘The Big Red Cheese’, ‘The World’s Mightiest Mortal’.

Would you call interconnected-doppelgangers who share the same powers as you do – family? That is exactly the case in Billy Batson’s story. The ‘Lieutenant Marvels’ consisted of 4 Billy Batsons including the ‘real’ Billy Batson. (The ’90s were a weird period!)

A little later down the line, DC Comics with the help of references from Fawcett’s Comics released a new timeline (that is critically adored by fans), and in that timeline, Billy has a family – a family of superheroes officially named the Marvel Family. (if you’re out of track, we’re still talking about DC Comics) The Marvel Family, not to be confused with the identical ‘Lieutenant Marvels’, consists of Billy Batson, Mary Marvel, Captain Marvel, Captain Marvel Jr, and other odd-backup characters – an ‘A-team’ in the DC Universe.

#3. ‘Shazam!’ was the most sold comic book of all time

‘Shazam!’ was, in the beginning, an outright parody of ‘Superman’ created just for thrills by Fawcett comics hoping to carve a niche into the superhero genre. But by the late 1940s, the Captain Marvel franchise exceeded expectations, and surpassed sales and popularity of Clark Kent (Superman).

This sadly did not last, by the year of 1953, all comic books on ‘Captain Marvel’ and his accomplices ceased production after DC Comics filed the lawsuit for copyright infringement on how ‘Captain Marvel’ was a carbon-copy of the ‘Man of Steel’ (Superman).

#4. Captain Marvel (Shazam!) vs Superman: Who would win? 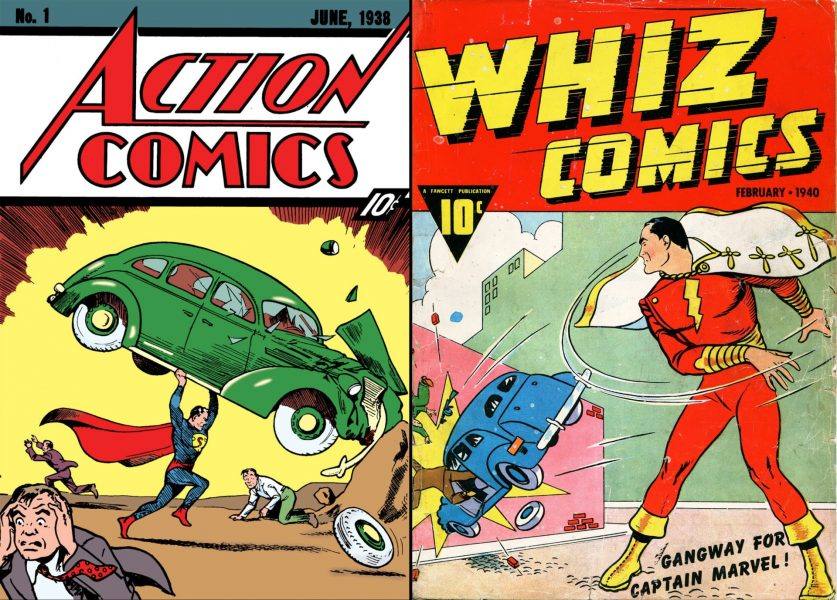 Although both companies were figuratively throwing punches at each other, with DC Comics claiming copyright, while Fawcett blocked accusations with denial of being a ‘Superman’ copy. But theoretically, who would win in a fist-fight brawl? ‘The Big Red Cheese’ or ‘The Man o’ Steel’?

Captain ‘Red Cheese’ here has the strength of ‘Hercules’ a mythical deity who shatters mountains with a prod, whereas, Superman – not technically a man, has an ancestral-tie to the ‘Kryptonians’ a species with super-human abilities. What I would like to know, is who would win in a game of ‘Arm Wrestling’? […] “What? You want to know who wins in a fight?”

There have been a few tabloids released where the 2 muscle-men fight it out (1978’s All-New Collectors Edition #58) and (Justice League of America  #137). “Who wins??!!! Just tell us!!” Well technically it’s hard to say, you’ll just have to take a look at it yourselves!

Long before Hollywood started mass-producing cliche superhero-movies every month, ‘The Adventures of Captain Marvel’ was one of the pioneers in its time. The year was 1941, the magic of motion-picture was mind-blowing, but the concept of heroes in constricting-blood-circulation costumes was even bigger.

‘The Adventure of Captain Marvel’ tells the story of Billy Batson (played by Tom Tyler) as he unmasks the Scorpion’s evil plan to use an ancient superweapon for Evil(?) (the plot was unmistakably hard to catch on), which ends in an amazing cliffhanger.

Oh and by the way, when I asked previously on who would win in a fist-fight, here’s a hero that could probably out-best ‘The Big Red Cheese’ easily.

Does Billy Batson ever get a sore throat from all that shouting? Is what’s been going through my mind as I come close to concluding this.

Where does Billy Batson go from here? What about our readers? If you had the power to swap places with a mighty hero, what would you shout be?

Win 2 ‘Shazam!’ Tickets At One Cineplex

One Cineplex in Brunei (click here to read Neue’s past article – Hear The Whole Picture With Dolby Atmos) has generously sponsored 2 tickets for its screening of ‘Shazam!’ this Sunday (April 7).

The winner will be announced on Neue’s social media platforms by 6.30pm on Friday (April 5).