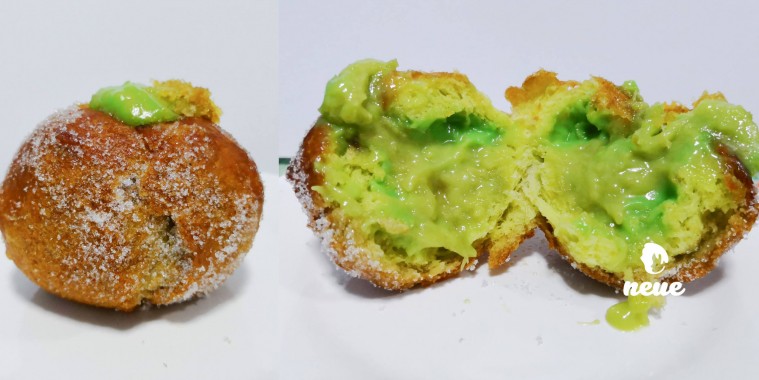 ‘Onde-Onde’ is a very popular ‘kuih’ in the region, specifically in Singapore, Malaysia and even Brunei Darussalam. In Indonesia, they are known as ‘Klepon’. They are pandan flavoured glutinous rice balls filled with gula melaka (palm sugar) and coated with grated coconut. The kuih has a chewy texture with a liquid centre.

Because of that, you have to be careful when you bite into the Onde-Onde. The melted gula melaka will flow out and it may make a mess. The way to eat it mess free is to put the whole thing in the mouth and let that divine sweetness bursts inside! Haha! The tastiness of the kuih is enhanced further by the grated coconut covering it. 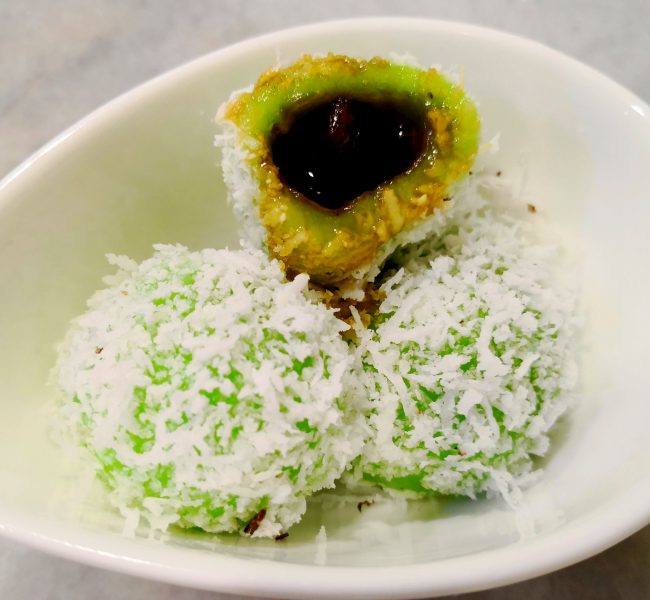 There is also a version of Onde-Onde where instead of being filled with liquid gula melaka, it is filled with grated coconut infused with gula melaka instead! So it is not as wet inside and not as messy to eat as well.

Basically, these 3 components are most important for an Onde-Onde – (1) Pandan, (2) Gula melaka (palm sugar) and (3) Coconut.

Onde-Onde apart from being a delectable kuih has become a flavour for other types of dessert and even drinks! I will share in this article the drinks and desserts that have Onde-Onde flavour.

I feel it is harder to implement the Onde-Onde flavour into donuts, as some elements may not be possible to be implemented easily. I have two examples of Onde-Onde donuts featured in this article and each seller has a different way of incorporating that Onde-Onde flavour.

For Chlocits Cafe, their approach is to incorporate the coconut pandan flavour and gula melaka together in the cream for the filling. So all the flavours are mixed up and the coconut pandan flavour stands out more than the gula melaka. But it is a nice touch I noticed that there is some grated coconut in the cream, even though it is not that much. The dough is also mixed with fresh pandan juice (as you can see from the light green colour of the dough), but there is just a subtle taste of it. 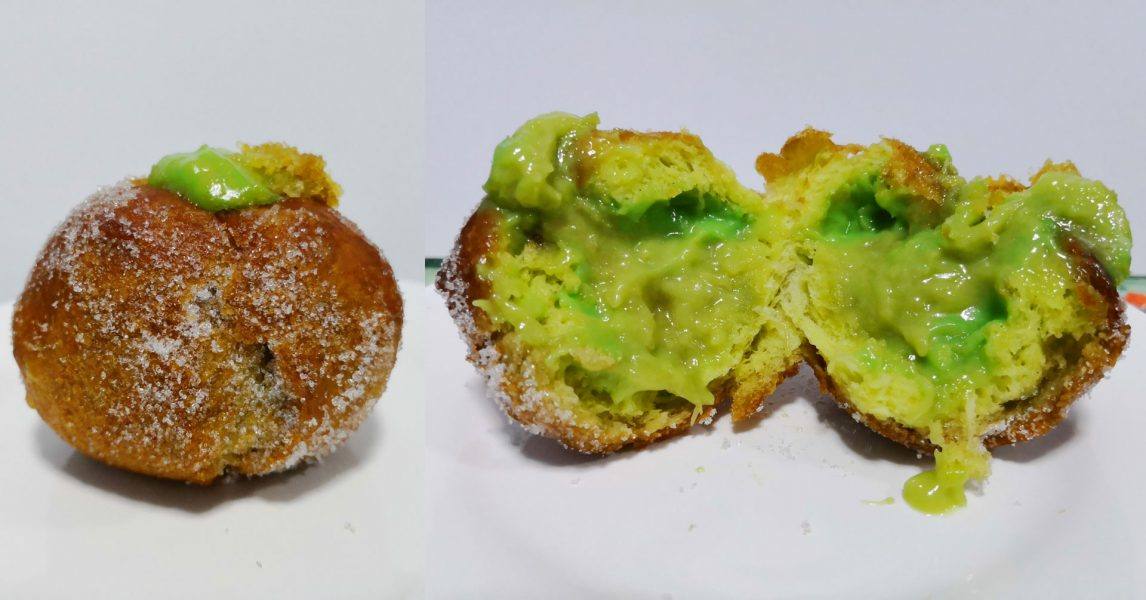 Noice’s approach is to fill the centre with gula melaka custard filling and the dough is just plain. The gula melaka flavour is more pronounced but it lacks the pandan element I feel or perhaps it is just not as obvious. There is some coconut shredding on top of the donut. 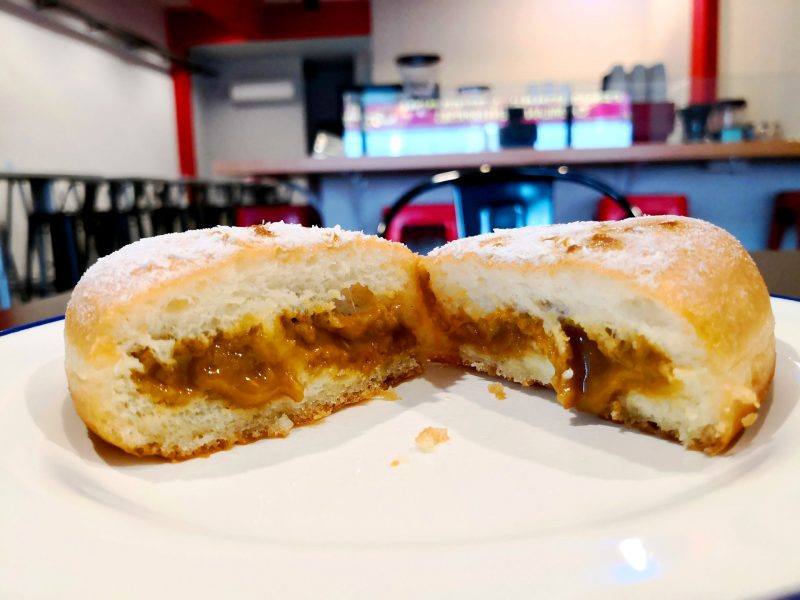 This is what I meant by Onde-Onde flavour being harder to implement on donuts. So in the end it is all up to your preference, I think if you like pandan flavour more, you would be very happy with Chlocits’ yummy donuts. If you are looking for a more notable gula melaka flavour, then Noice’s Berliner is a passable choice.

*Note: Chlocits Cafe is home-based and you can check out more about them on their Instagram @chlocitscafe.

It is more common to see Onde-Onde cake being sold at cafes as it is quite a popular flavour for cakes. Each café have their own way of making it, some put more emphasis on the gula melaka flavour while others on the pandan flavour. This is a similar case as Onde-Onde donut when it comes to their filling. I’m featuring the cake from Matcha Mana for this article. 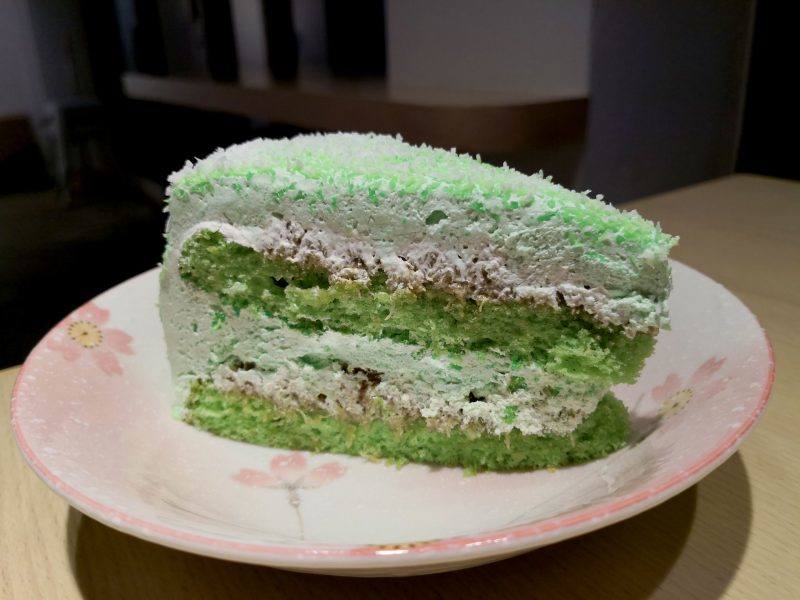 The cake is made up of two layers of pandan sponge cake with pandan cream frosting and filling. There is gula melaka infused grated coconuts in-between the layers of cream and sponge cake. To top it all of, there is also regular grated coconut covering the cake to complete that “Onde-Onde” look.

The taste of their cake I feel puts more emphasis on the pandan flavour, similar to the donuts by Chlocits Cafe I mentioned earlier. Personally, I wish there was more of the gula melaka grated coconut for the filling instead of the pandan cream. But they do have all the main ingredients for their cake and that is what matters the most!

Cupcakes are similar to a cake in the sense that they are a cake but in a “cup” form, haha. The concept is more of less the same to an Onde-Onde cake, but since there are no layers, sometimes the centre is filled with something instead. Such as the case for the cupcake that I am featuring in this article.

The cake is pandan flavour filled with fresh grated coconut cooked in gula melaka and the frosting on top is coconut buttercream with some of that gula melaka infused grated coconut as well. The way the flavour is implemented is similar to the other Onde-Onde version I explained on my introduction about the kuih. I really love it. The filling is delicious and there is a generous amount of it as you can see on the picture below. 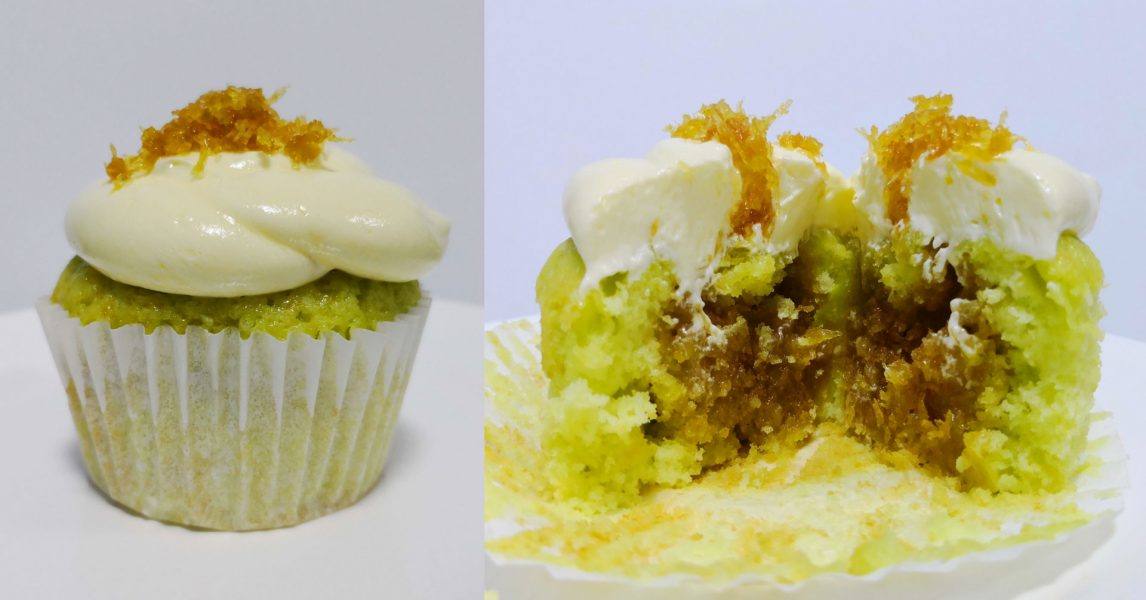 Symbolically it does feel like eating the kuih itself; the coconut buttercream symbolises the grated coconuts outside of the Onde-Onde, the pandan cake symbolises the pandan glutinous rice and the centre of course has the same filling as the actual Onde-Onde kuih.

I am not surprised that Onde-Onde works so well as an ice-cream flavour and the way Kyna makes this is perfection! They have the advantage of making popsicles and I feel an Onde-Onde popsicle works better than it being an ice-cream scoop. Why you may ask? Because it literally looks and feels like the actual kuih. 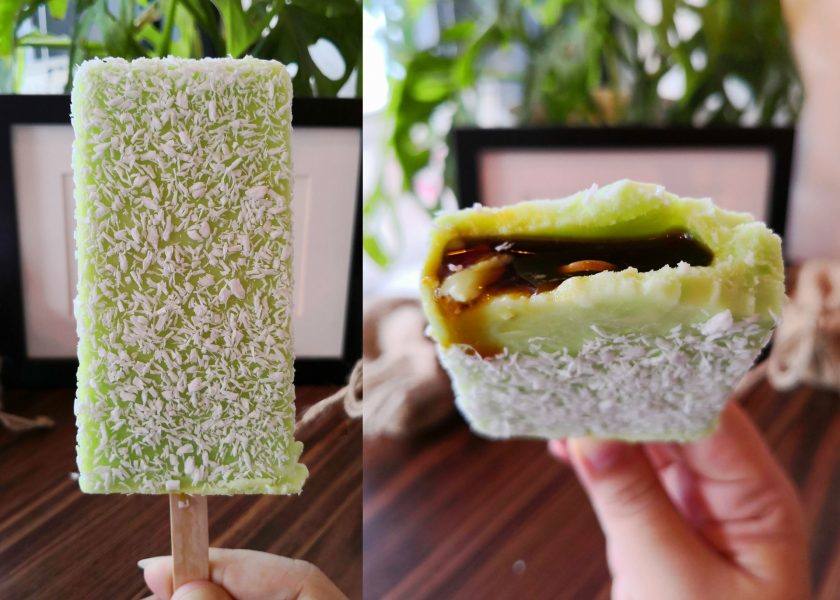 The popsicle itself is pandan flavour, coated with shredded coconut and inside there is liquid gula melaka! If that does not remind you of the kuih itself I don’t know what is … LOL. I really love this ice cream, I love pandan as a flavour but that distinct sweetness from the gula melaka filling really makes a huge difference!

In all honesty, I never thought that it would be possible to make a latte based on Onde-Onde! Kudos to the barista from Piccolo Cafe who came up with this idea. This was an exciting surprise when it was first introduced. I like the way they executed it as well. 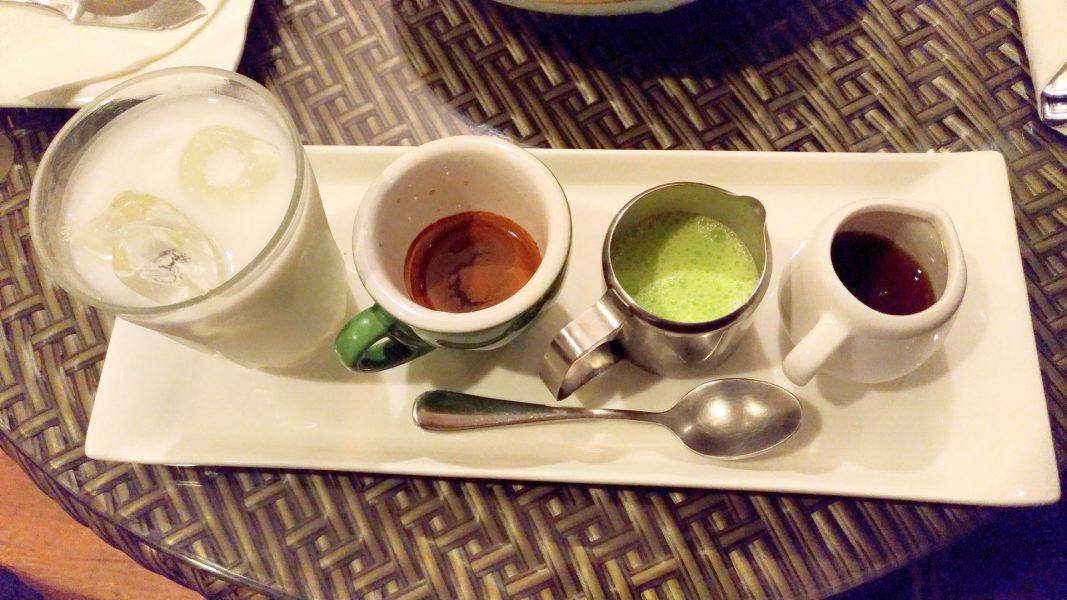 There are four different components for this Onde-Onde Latte: milk, espresso, pandan/coconut cream mixture and gula melaka. You get to do the mixing yourself! You get to pour as much as you want for each components according to your preference… You it want sweeter? Pour more of that gula melaka! You want the coffee stronger? Pour more of that espresso! I must admit it was indeed a fun way to drink! (It’s as if it was some sort of experiment and you are concocting a potion or something!) The taste really does reminds me of Onde-Onde because all the main components are there but with coffee.

It is basically pandan-flavoured milk tea with a thin layer of gula melaka at the bottom. The taste is as expected from a milk tea, with a hint of that pandan flavour and sweetness from the gula melaka. Though it is lacking the coconut element for this drink so I feel it is a bit incomplete. I wished they had added just a bit of coconut milk to complete all the main ingredients of an Onde-Onde and to give a bit more of that gula melaka syrup. But it is still passable as an “Onde-Onde Milk Tea”. This is only available for a limited time at Chatime, so if you guys want to try this, better get it quick! 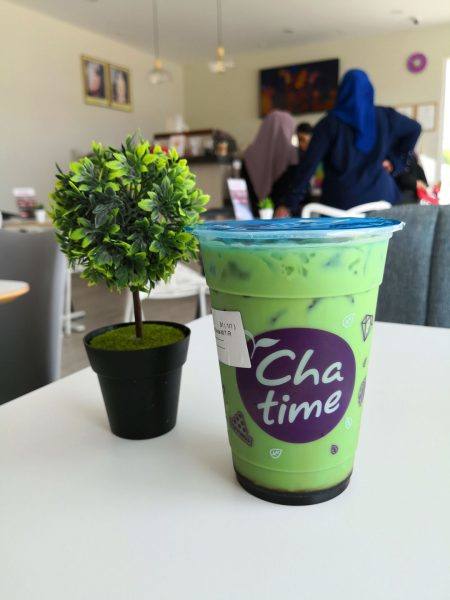 So what are my thoughts?

The food and drinks that I featured in this article are quite a good implementation of the flavour, which originated as a kuih. I am impressed with most of them and these are just some of the ones I discovered! There may be other desserts apart from the ones mentioned that have Onde-Onde flavour as well.

I noticed some of them put more emphasis on the pandan flavour but personally, I would have preferred the gula melaka to be focused more on. Because if you think about it, that is the star of the kuih. When you bite into the Onde-Onde, you get that burst of gula melaka in your mouth and that is what I look forward to when I eat it.

In my opinion, it should be the same for the drinks or desserts with Onde-Onde flavour. The first bite or sip should remind you of that heavenly gula melaka taste, with pandan coming in second. But that is just my personal preference.

So do you guys like this kuih being made as a flavour? Is there any other of traditional kuih that you think could be made as other types of dessert or even drinks? Let me know by sharing your thoughts in the comments section.