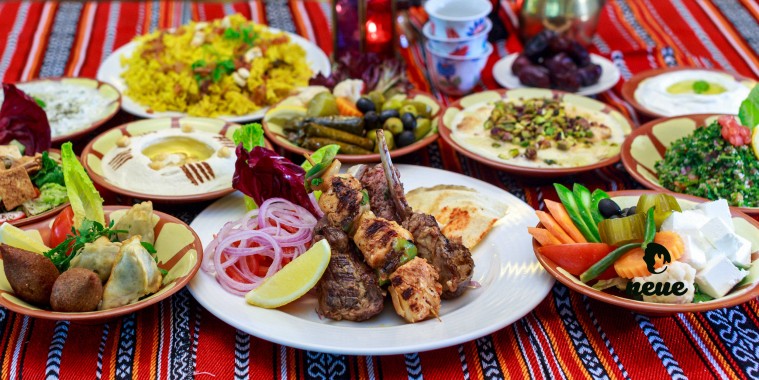 During this time of year, you’ll be bombarded with statements like these!

Yep, you guessed right! The fasting month of Ramadhan is upon us.

It’s not only a time of tranquility and reflection, but also a time for people, Muslims and non-Muslims alike, to gather and reconnect with relatives and friends.

And what better way to strengthen ties between one another than with food?

Sungkai buffets are available at most food outlets and restaurants around Brunei.

However, deciding where to eat during the month of Ramadhan can be a daunting task. 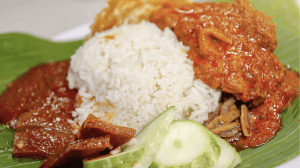 Click on the photo to read one of Neue’s past articles – “Is it possible to survive with only $5 a day in Brunei?”

This is why Neue got in touch with some of our friends to see if they had any recommendations.

Nabeela Fadzil (@lipstickmyname), a Brunei fashion enthusiast who was previously featured in Neue’s 9 to 5 segment, on the other hand, said that you can’t go wrong with Rack & Brew, a local lifestyle boutique cafe in Gadong.

Nabeela, who revealed that she’s “more social on social media than she is in real life” in a recent interview, recommended Neue readers to check out Rack & Brew as it is known for its “generous” spread of lamb, salmon and roasted beef!

Rack & Brew’s Sungkai Buffet will start on May 8 (Wednesday), featuring its signature roast, kolomee, beef ribs, lamb, salmon, salad, sushi, cakes and MORE! To avoid disappointment, be sure to make a reservation by calling 2457886 or 7299668. 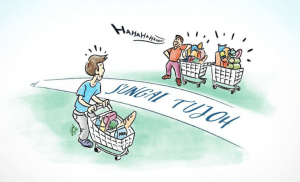 Click on the photo to read one of Neue’s past articles – “Is it true? 1 trolley in Brunei = 2 trolleys in Miri”

Izzul (@iammontiiii), who was featured in Neue’s 9 to 5 segment last December, meanwhile, tipped Neue off about … (brace yourself!) … an ALL-YOU-CAN-EAT BURGER BUFFET! (Yep! Your eyes aren’t playing tricks on ya! You read that right!)

“The burgers at Burger Dairy located at Gadong Central are amazing!” professed Izzul.

We here at Neue trust Izzul’s taste because he was once quoted as saying that his ultimate breakfast would include a plate of Seria Kuey Teow topped with ‘Telur Mata Lembu’ (sunny side up)  from the famous riverside stall in Menglait and Chop Jing Chew Roti’s Kacang Kawin.

Did you know that there is a “hidden” link between music and food? Well, we didn’t either but you can read more about it here.

Local DJ duo KYSB (@kysbofficial) had loads of recommendations. Who would have guessed that they had this much passion for food 🙂

But hey! I guess the saying must be true… good music and good food do go hand in hand!

KYSB said pizza lovers in Brunei can rest easy thanks to Pizza Hut’s all-you-can-eat pizza buffet deal! As an added bonus, you also get to enjoy free flow of Coca-Cola. The buffet will run daily from 6pm to 9pm throughout the month of Ramadhan.

“When it comes to seafood, you just can’t go wrong with GK Restaurant, particularly the one in Jerudong,” said Edmund (Kueymo) and Riff (Sushiboy) of KYSB.

So Many Choices (You Can Also Have Sahur Here!)

With 100 varieties of appetisers, mains, desserts and free flow drinks, what more could you ask for?

“You’ll love the live seafood and tepanyaki at I Lotus Restaurant,” said KYSB.

The buffets (Sungkai & Sahur) will be available from the third day of Ramadhan (May 9, Thursday) till the end of Ramadhan.

“In the past, I’ve enjoyed the Ramadhan buffets at Tasek Brasserie located at Radisson Hotel in the capital,” said the ever-friendly Bruneian Eats.

According to the local food blogger, she’d definitely recommend Tasek Brasserie as it is well known for its large selection of food – Malay, Western as well as seafood.

Amsarra, which is well-known for its “Lebanese” Style Shawarma and UK-inspired Lebanese & Mediterranean dishes, was another pick by Bruneian Eats.

Previously located at Annajat Complex near the Beribi Roundabout, Amsarra has since moved to the swanky One Riverside, which is situated in the heart of Gadong, facing Sungai Kedayan and Sungai Menglait.

“You have got to try the lamb and salmon from Amsarra,” said Bruneian Eats, who has previously written an article about Amsarra’s Ramadhan buffet back in 2018 in her blog.

However, do keep in mind that the buffet will only be available from May 10 (Friday) onwards. To make a reservation, call 7312545.

Another good place for roasted lamb has to be Dynasty Restaurant, according to Bruneian Eats.

According to its social media post, the restaurant will be having a ‘Cahaya Ramadhan’ buffet throughout the month of Ramadhan.

Dynasty Restaurant – one of the restaurants under Royal Brunei Catering – will be featuring its signature lamb dish, which is said to be “a favourite amongst most Bruneians”. You can make a reservation by calling 2430185 or 2430186.

For every adult-priced Sungkai purchased, a meal will be donated to Tayyib, according to Dynasty Restaurant’s social media post.

What Would You Recommend?

We here at Neue strongly value our readers’ opinions and we would like YOU to connect with us.

We believe that our readers are the best judges when it comes to food!

So go ahead and comment and you may just very well win a FREE Ramadhan buffet for 2 adults courtesy of Neue.

All you have to do is (1) follow Neue and (2) tag any restaurant in the social media post of this story.

The winner will be selected at random on May 14 (next Tuesday).

Neue will announce the name of the winner on social media by May 15 (next Wednesday).

Have a safe and blessed Ramadhan!

Deciding where to have you buffets during the month of Ramadhan can be a daunting task.⁣ ⁣ Click on 'Learn More' or visit whatsneue.online to check out some recommendations by Neue's friends.⁣ ⁣ We here at Neue strongly value our readers’ opinions and we would like YOU to connect with us.⁣ ⁣ We believe that our readers are the best judges when it comes to food!⁣ ⁣ Comment & win a FREE Ramadhan buffet for 2 courtesy of Neue.⁣ ⁣ All you have to do is (1) follow Neue @whatsneue and (2) tag any restaurant in this social media post.⁣ ⁣ The name of the winner will be announced on May 15.⁣ ⁣ #whatsneue #bruneifoodies #brunei #sungkai #sahur #ramadhan