Game of Thrones: Who Do You Think Will Kill Cersei? 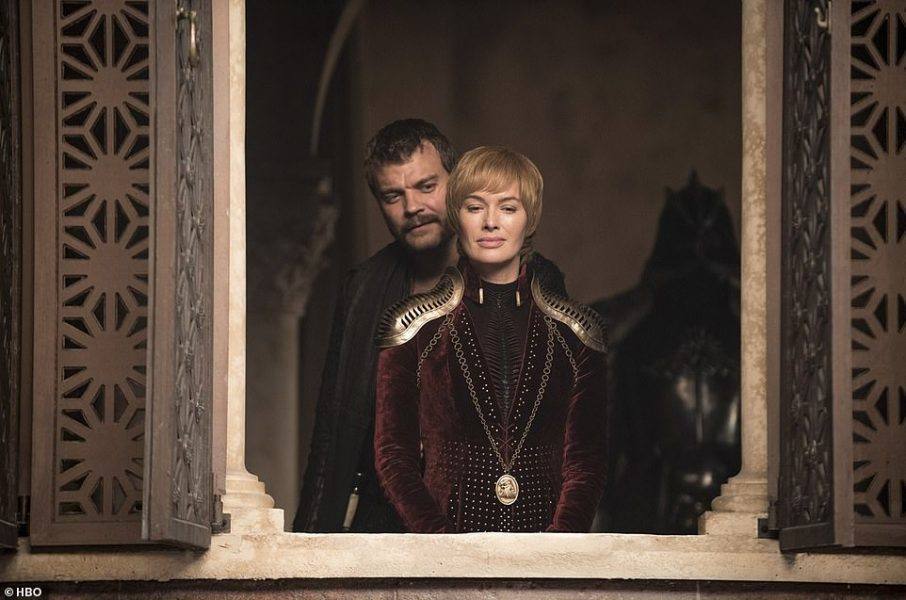 Be sure to share this story with a Game of Thrones fan and ask them to predict who will kill Cersei!

The following article is a recap of ‘Game of Thrones’ Season 8 Episode 4.

If you have not seen the latest episode, click here to read Neue’s (spoiler-free) article – “Top ‘Games of Thrones’ Questions For Season 8”.

The distant sounds of battle-drums and war-trumpets ring like a ghastly cry in the early clips of Game of Thrones latest screening.

The fourth instalment – coined “The Last of the Starks” – plays off the morning after the vicious, one-sided war against the Night King and his horde. Stiff on their death-beds, Jorah and Theon laid awaiting a Vikings death.

Among the scattered dead, who’ve not turned to shards of ice, a woeful eulogy by Jon Snow goes: “We’re here to say ‘goodbye’ to our brothers and sisters, our fellow men and women who set aside their differences to fight together and die together so that others may live!” 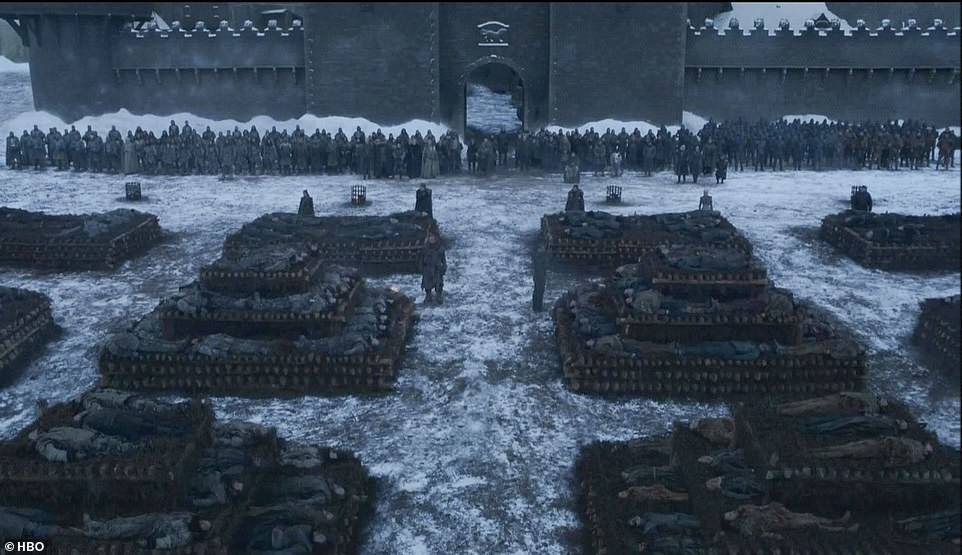 The New Lord of Storm’s End 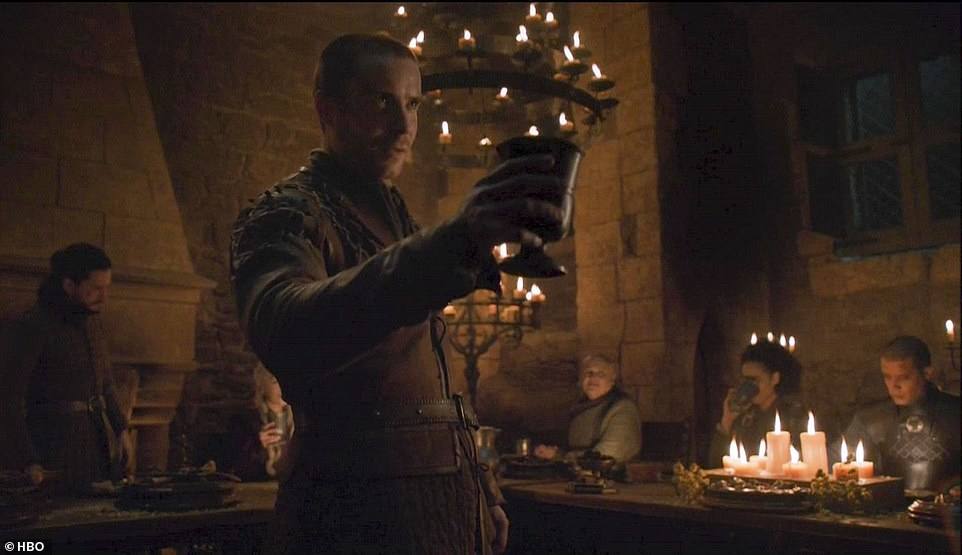 In a dining hall, where the remaining survivors hungrily feast on the dead’s behalf, accompanied by dimly lit candles. Dany calls for Gendry to come up forth, amounting and crowning the ‘bastard’ as the new lord of Storm’s End.

As the celebration fanfares, Gendry scouts around for his ‘One-Night-Stab’ Arya. In her lonesome, Gendry found her shooting arrows, promptly kissing her. He tells her that he was appointed as the new lord of Storm’s End.

Gendry gets onto his knees, asking Arya for her hand, to be his lady. To her reply, “You’ll be a wonderful lord — and any lady will be lucky to have you — but I’m not a lady, never have been.” Quickly avoiding an awkward position, she turns back to shooting arrows.

Never Have I Ever … 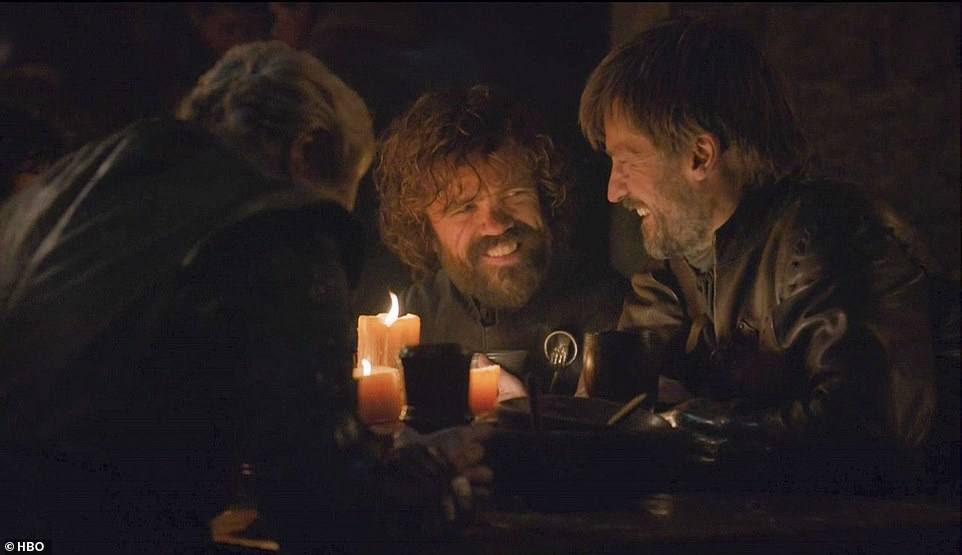 Among the lucky ones feasting in the hall; Jaime, Brienne, Podrick, and Tyrion sit shoulder-to-shoulder, cup-to-cup with their own little past-time of “Never have I ever”.

The jolly-slightly-drunk folks loosen-up, as round after round, Brienne teases Tyrion on his past failed marriages, prompting a sharp stab at Brienne, “You’re a virgin!” Tyrion asks. Uncomfortable, she excuses herself and walks away.

Tormund, who is head-over-mountains for our Ser Brienne tails her, only to be stopped by a courteous Jaime, or so we thought. Jaime ends up alone with Brienne in her shed. And let’s just say they got to know each other a little better … 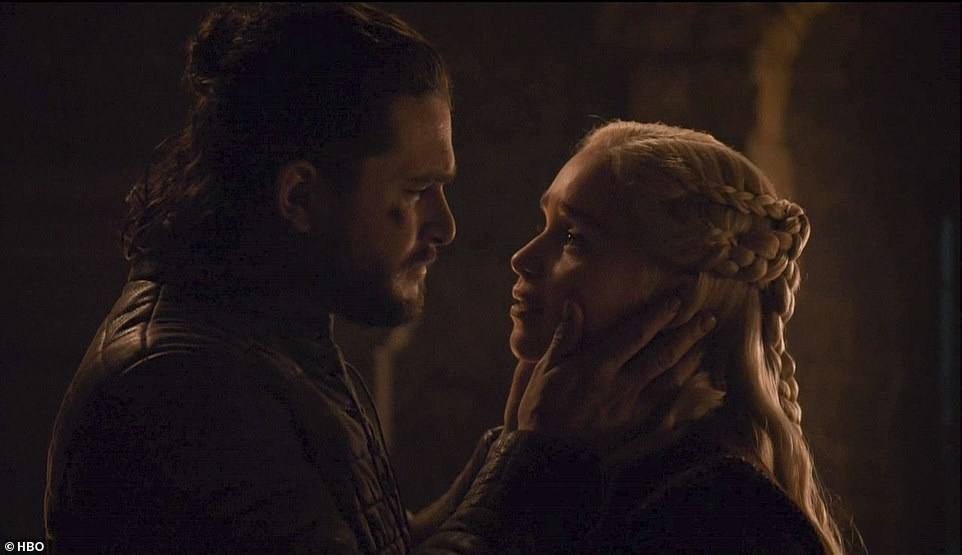 “You are my Queen. Nothing will change that. They are family. We can’t live together.” Jon says. “We can, I just told you how,”

Dany and Jon are heading to a bumpy-crossing, as Dany is still malicious in bane, towards Cersei and the Iron Throne, ignoring the fact that she and Jon are related. She begs Jon to secrecy, not telling anyone his true identity. But we know he can’t do that.

Jon meets up with the Stark sisters beside that weird tree. (you know, that same white tree) Arya, flaring her eyebrows, tells Jon that they are the last of the Starks. Up against a wall, Jon tells the both of them the truth, making them promise not to tell a soul. (Not much of a secret anymore!) 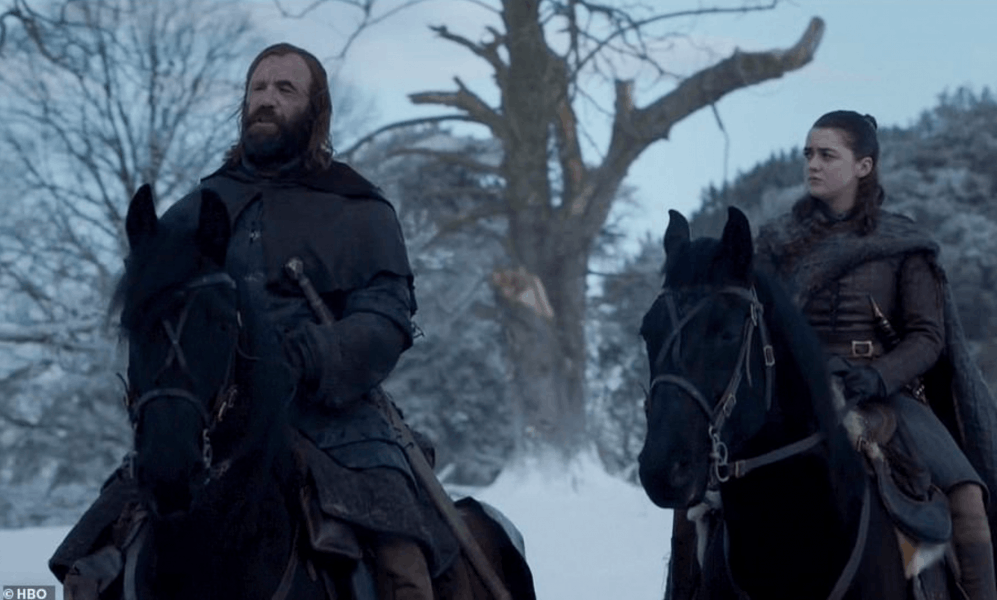 Both Tyrion and Jaime are beside the fire, drinking, jesting, making fun of Jaimes choice in women. Till Bronn makes an appearance with the crossbow Tyrion used to kill his father. Bronn though is confident that Cersei will not win against 2 dragons, so he strikes up a deal, in exchange for their lives, Tyrion promises Highgarden. They both give Bronn their words and he leaves.

Out on the snowy paths, The Hound on horseback is joined shortly by Arya, both riding down South to finish their business at King’s Landing. Joining the war-trail later on, Jaime, leaving Brienne and Winterfell to head towards King’s Landing. What is he going to do once he meets Cersei? Will he live up to his name?

Dany’s small fleet, sailing calm waters alongside the Unsullied and her dragons. A scene foretells the fate of Missandei, with her holding hands with Grey Worm. Tyrion, underdeck, tells Varys that “Maybe Cersei will kill them all, solving all our problems.” But things really start to go south when Euron’s battlefleet ambushes them by shooting a new-mass invented dragon-piercing ballista, raining bolts at one of the dragons violently.

After washing up on shore, plywood and soldiers, Grey Worm starts frantically calling out for Missandei, to no avail she is captured by Euron, bringing her back (pretty quickly) to Cersei. 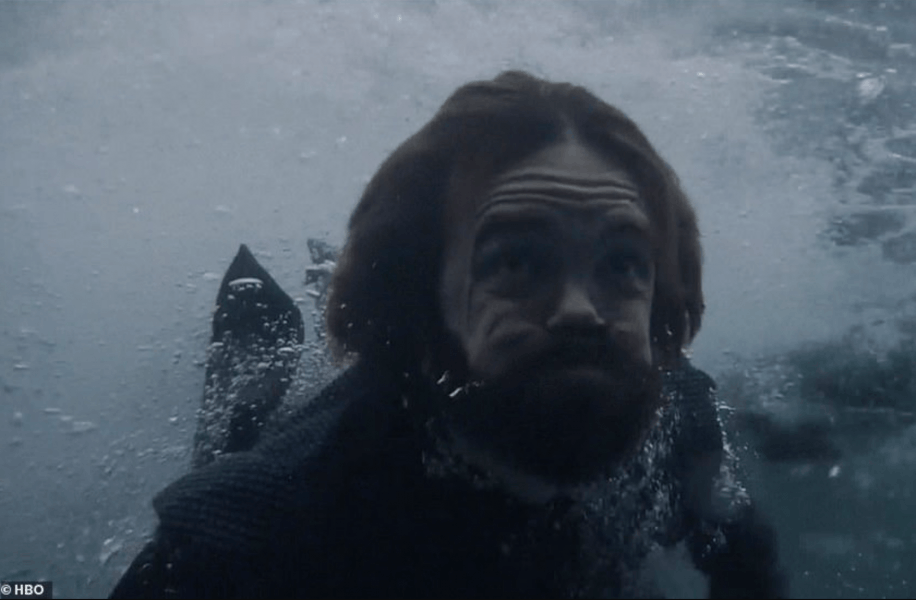 Dany and a small platoon peacefully make it to the front-fortified gates of King’s Landing, with small-hopes on Cersei’s surrender of the Throne. The plan wasn’t for Cersei’s surrender, but for her refusal, as then the thousands of death will be on the hands of Cersei.

Giant balistas and archers fill the walls, aiming towards Dany’s platoon. Cersei, Euron and Missandei stand atop the walls, an aerial-shot view shows that Dany is severely outnumbered, then the gates open, with Qyburn walking out as a war-messenger, Tyrion walking ahead to convey their message.

They both, funnily enough, want the same thing, with the surrender of the opposing sides. Qyburn adds that if Dany does not surrender, they would kill Missandei there and now. Tyrion, at wit’s end, begs for Qyburn for a better solution. Seeing no better end, Tyrion walks up towards the gate.

Cersei orders the archers to halt their nocks. Tyrion tries to win Cersei’s emotional side, claiming that the citizens of King’s Landing do not care for her and she equally does not care for them. “You are not a monster, I know because I have seen it.” He begs and begs, “You’ve always loved your children, more than yourself, more than Jaime,… It doesn’t mean your baby should die.”

Cersei, with tears building up, walks towards Missandei, asking if she has any last words. Missandei, knowing she is close to her end, yells to the creak of her lungs “Dracarys!”, the command used by Dany when she orders her Dragons to rain hell. Cersei signals The Mountain, who unsheathes his blade, walks behind Missandei and “Off with her head-ed” her. 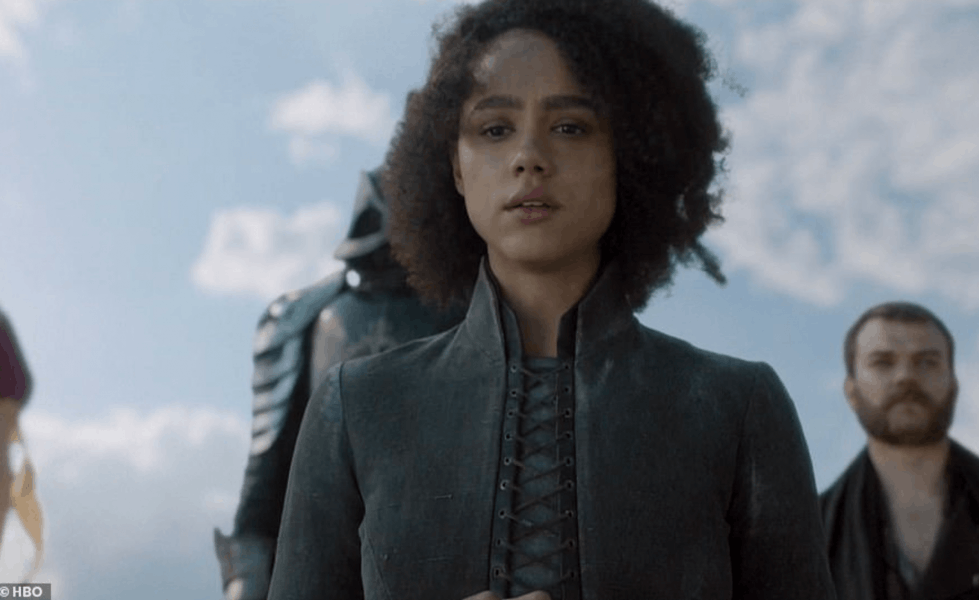 Initially, grouped together, sitting around the computer screen, like a bunch of campers squatting around a campfire. Each and every one of the Neue team expected the episode to lack any action, as they’ve exhausted a load of resources for Episode 3.

Though blood was probably not as expensive-ly spent on as the previous episode, there were a few scenes of people ‘losing their heads’.

All in all, this season, being the finale of a Grandeur franchise, is keeping to its tradition of dramatic build-up, creating a sense of anxiety for the upcoming episodes, leaving little-to-no cliffhangers.

There are two more episodes left in the series, what did you think of this episode? Who’s losing their heads in the next episode? Let us know in the comment section below! (All photos courtesy of HBO)