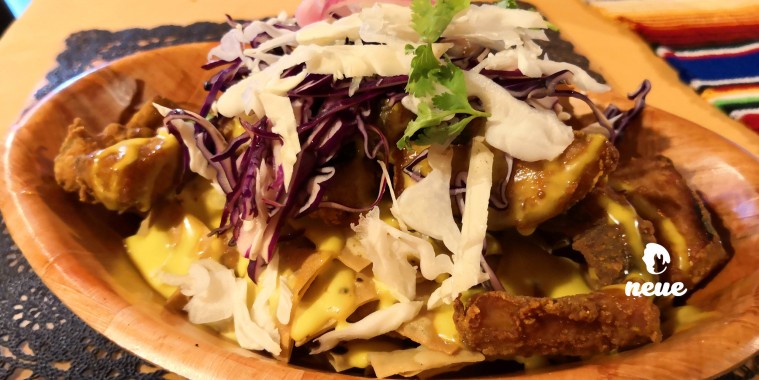 Mexican food is fresh, vibrant, colourful and fun. Chili peppers, tortillas and fresh vegetables are some of the hallmarks of this cuisine. Typical Mexican dishes can range from the very basic quesadilla to a more complex dish such as chicken with mole negro sauce. It is believed that authentic Mexican food have been derived from a combination of ancient Aztec, Mayan and Spanish influences.

In Aztec diet, large red tomatoes, tomatillos (green tomatoes) and chipotle are a staple. We can also thank the Aztecs for adding chocolate/cocoa in Mexican cooking. Mexican food are known for their salsa, which is the Spanish word for sauce. Salsa is uncooked and it can be pureed until smooth or chunky or it can just be chopped.

Spanish food had the most influence on Mexican cuisine we now know today. They added elements such as meat, cheese and rice to Mexican dishes which added European flavors. An example of this is those delicious cheesy quesadillas where the classic Aztec tortilla is used as the main ingredient but added cheese to the mix, which was introduced by the Spaniards to the Mexicans.

Tortillas are the building blocks of Mexican staples such as quesadillas, enchiladas, tacos and many more! Chilies are also very common in Mexican cuisine and it gives their food that distinctive flavour, which is usually enhanced with herbs such as cilantro and spices as well.

This is basically what traditional Mexican food is.

Now, allow me to talk to you about the Tex-Mex variety of the cuisine.

What is Tex-Mex, you ask?

Well, Tex-Mex is a cuisine loosely based on Mexican cuisine. In fact, you would be surprised most of the “Mexican” food that we know of are Tex-Mex creations!

This cuisine was invented by Texas settlers who were inspired by Mexican cooking but the ingredients and culinary practices are different from traditional Mexican cuisine. Basically they are Mexican-American fusion.

Generally cheese plays a huge role in Tex-Mex food and they are not typically used in mainstream Mexican cuisine. Dishes such as burritos, chimichangas, nachos, crispy tacos, enchiladas and fajitas are all Tex-Mex creations. (Surprise surprise! Now you know!)

But they are still considered as “Mexican” food with an American touch to it.

Common Tex-Mex food like hard-shell tacos and nachos can be found in several restaurants in Brunei as part of the menu but it would be rare for you to find a place in Brunei that offers a variety of Mexican dishes apart from those typical ones.

There is only one restaurant that I know of that focuses on Mexican food, and that is Ricardo’s Mexican Grill and Ricardo’s La Galeria.

Ricardo’s Mexican Grill is run by two passionate husband and wife chefs, Chef Hakeem and Chef Mari. Chef Mari is of Mexican descent and that itself is an advantage to them for serving Mexican food. Their restaurant offers a mix of traditional Mexican dishes and Tex-Mex dishes.

I will be featuring five of their dishes in this article! 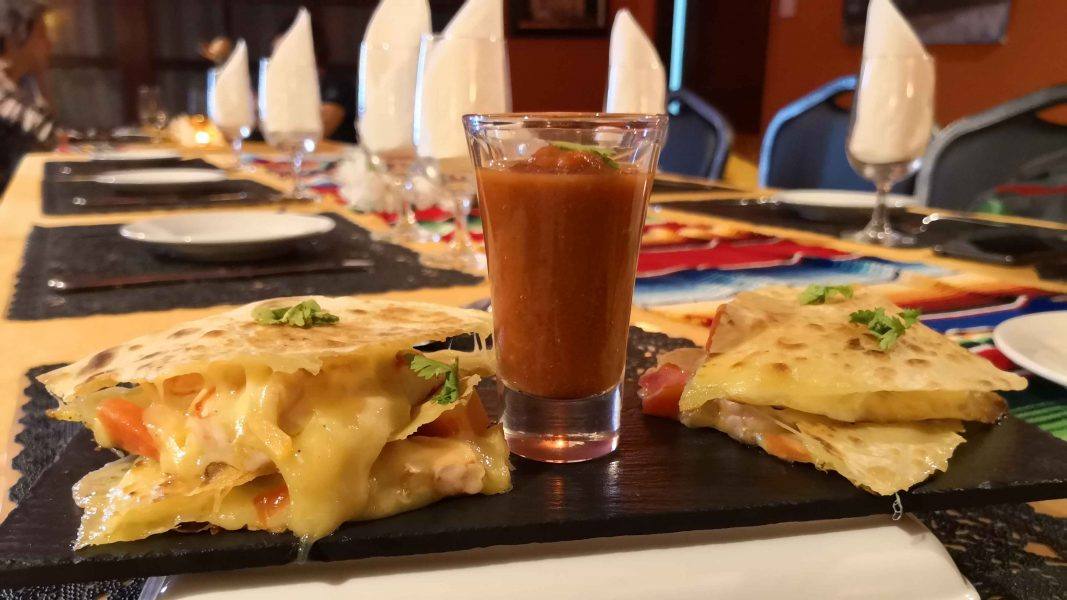 I loved this a lot!

The shrimps are seasoned well and they are juicy with a slight tang from the lime juice. The quesadilla is quite cheesy as well!

I don’t really eat papayas but somehow I really loved it with the lime shrimp. The papaya chunks are sweet and crunchy, it gives some texture when you bite into the quesadilla and the sweetness balances the lime juice!

There is also Salsa Cruda included with the dish. It’s a tomato-based salsa made with uncooked pepper, cilantro and spices. The salsa makes the quesadilla even more yummier. It’s not sour or anything, it just tastes pleasant and super fresh and I am really loving the flavor profile of this dish. Everything just works to my amazement! 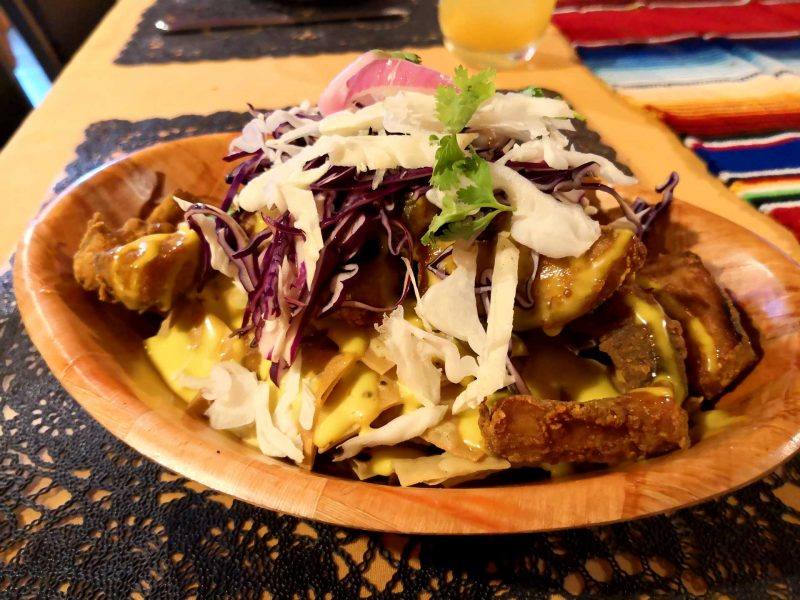 Nachos are actually a Tex-Mex dish and this is Ricardo’s take on this classic. The tortillas chips are different from the usual triangular nacho corn chips that we are used to seeing. The chips are unflavoured and super crunchy and they are very generous with the fried fish. On top of that, there are super fresh caper slaw drizzled with a delicious spiced honey sauce! It’s sweet. I totally loved the flavours.

I have to say, this is not your typical nachos with minced beef, melted cheese and corn chips!

It’s definitely a unique experience. According to Chef Mari, most of their food are “American portion-sized!”

(True enough! I honestly felt that most of the dishes I tried here were best for sharing!)

Tuna meat is used for this nacho dish. They are nicely seasoned and coated with a light batter. Size wise, the tuna meat are big chunks. You’ll definitely have more than enough fish to eat with the chips. I must be honest here … I never would have thought I would be eating “nachos” with fried fish 🙂

This dish is grilled chicken cooked with fresh cut bell pepper, caramelised onion and tomato. All of that tossed in Salsa Verde and spicy seasonings and laid on a sizzling skillet. They are served with four tortillas and they also have the option to use flank steak.

Salsa Verde’s main ingredient is tomatillo, which looks like small green tomatoes. Salsa Verde is also called “green sauce” and it has tart taste. The grilled chicken relies on the Salsa Verde to give it that tangy flavour and they are big in pieces.

The sizzling fajitas also come with Salsa De Chile and shredded cheese on the side. The Salsa De Chile is a red sauce made of chili peppers; it really looks like chili paste and it has a sour taste. So with all these components, we mix all of it together and put in the tortillas as a wrap! All the flavours add up when they are all combined.

I really like the way the tortillas are presented in the basket with the Sombrero lid and scarf and all … It really does give it that Mexican touch!

So what can I say about this dish? If you favour sour/tangy/tart food, then you will probably like it! 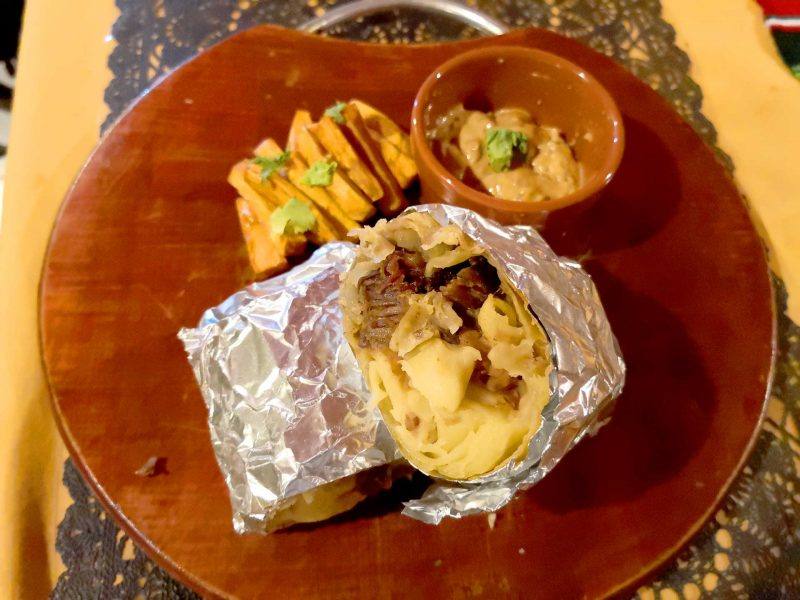 This dish is slow smoked brisket wrapped in warm burrito tortilla with caramelised onions, macaroni and cheese, crema Mexicana. It is served with sweet potato fries and chipotle mayo.

This is another Tex-Mex creation and it is less traditional, but still has a Mexican influence nonetheless!

BBQ lovers would love this burrito!

As a BBQ lover myself, I can vouch that this dish will make your mouth water! Oh my goodness! That slow smoked brisket was unbelievably soft and tender. (Apparently, it was cooked for 24 hours!) And it has a subtle smokey taste to it.

It doesn’t taste as “cheesy cheesy” because crema Mexicana is a cultured, sour cream cheese made with pasteurised milk. Its consistency is thick and and it makes the mac and cheese creamy-ish.

It doesn’t taste as cheesy like the English mac and cheese, which commonly uses cheddar cheese.

As far as I am concerned, the highlight of this dish has to be the chipotle mayo! Oh-my-goodness! It was so good! The taste really reminds me of BBQ sauce and there is some heat to it. You could say that it’s kind of like a spicy BBQ mayo! This has probably become one of my favourite flavoured mayonnaise now … Haha! I love dipping the sweet potato fries in it and I love smothering it on the burrito too! Yums! 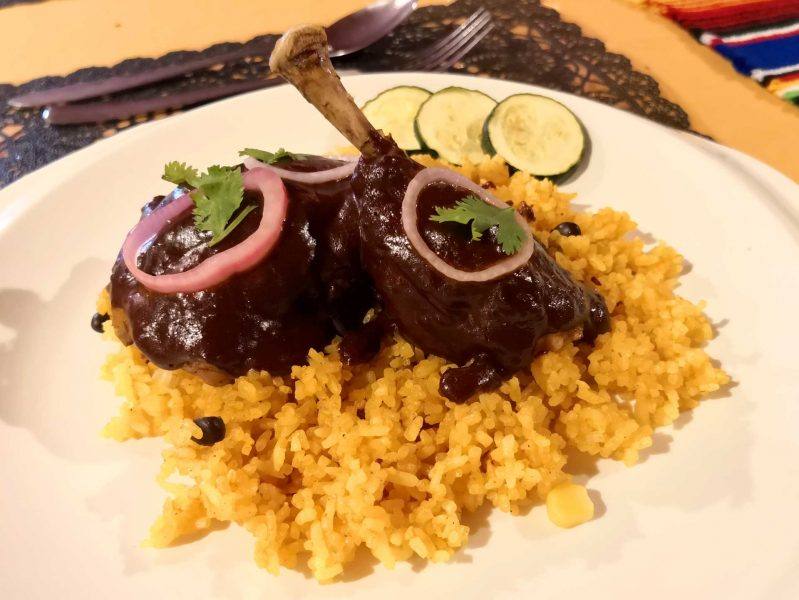 This dish is Chef Mari’s specialty! It is grilled chicken leg topped with mole sauce made from chocolate, chillies, nut and spices.

Now, this dish is more traditional and unique. It is a very popular Mexican dish.

In fact, if you search for “must-try Mexican food” on Google, you will probably see Mole listed on many of the results.

Indeed, the mole sauce is nothing like I have tasted before and there is no similar Asian dishes like this I think. The sauce is thick and the chocolate taste is more prominent. It is a sweet sauce. Even though there is supposed to be chilies in the sauce, it is (surprisingly) not spicy at all! I think the chocolate neutralises it! Haha!

As for the chicken, it is cooked perfectly and the meat is oh-so-tender. The rice is flavoured and it is a nice combo to be eaten together with the chicken mole. I would definitely recommend anyone to try this if you want to try something authentically Mexican.

Where To Get The Food?

They have two branches – one in Kuala Belait and the other at Jerudong Park Food Court.

Their main restaurant, Ricardo’s La Galeria, is located at Lot 5556, Jalan Setia Pahlawan, Kg Pandan, Kuala Belait. (No worries they are on Google Maps if you have a hard time finding them!) You can contact them at +6737206809 or follow @ricardoslagaleria or #ricardosmexicandelivery on Instagram for updates.

The reason why their restaurant is called “La Galeria” is because the space itself is like a mini-gallery with paintings all over. The dining space is also decorated with some Mexican decorations and the place being at the chef’s own home does make it feel homey to a certain extent. I like the small touches they do like playing Mexican music in the background. It really adds to the experience of eating Mexican food with Mexican vibes.

The interior of Ricardo’s La Galeria

Their KB branch opens from 6pm to 10pm (Tuesday until Sunday). This branch has a more extensive main course menu, while the menu at JP branch is limited.

I highly recommend you to drop by their KB branch for the full experience! They have many more to offer than the ones I featured on this article and hope all readers will enjoy the food as much as I did.

What are your thoughts on Mexican food? Would you be interested in giving it a try? Do let me know in the comments section and follow me @dafoodenthusiast on Instagram for food updates.