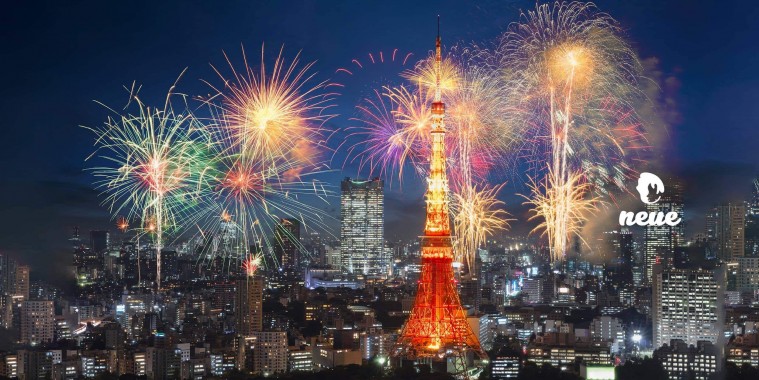 It may be eternally summer here in warm Brunei, but that doesn’t mean you can’t enjoy summer festivals elsewhere! Specifically, in the incredible city of Tokyo, where the nights will be lit up with fireworks and cultural celebrations roam the streets during this season. If you’re planning to make a trip to this city from July until September and wondering what events are being held then, we’ve got you covered.

From massive fireworks events to musical festivities, here is a list of the top 10 summer festivals happening in Tokyo this year! 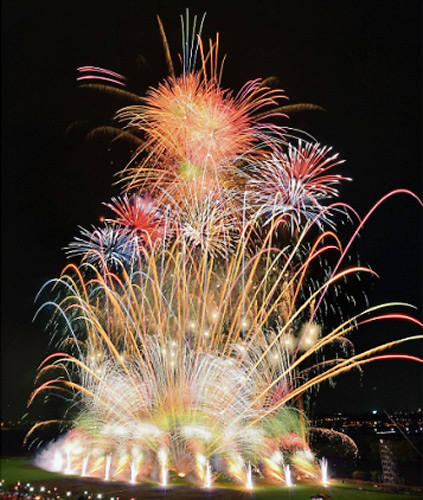 Watch the evening sky light up with the launch of some 13,000 fireworks during the Katsushika Noryo Hanabi in late July! If you’re worried about crowds, this is actually one of the smaller fireworks festivals during this season, so rest assured that you won’t be jostling for space during the event.

The festival will be held at the Shibamata Baseball Field near the Edogawa River, from 7.20pm and will last for an hour. Best of all, entry is free for all the fireworks festivals listed in this guide. The nearest station, Shibamata Station is a mere 10-minute walk away, but you can also alight at the Kanamachi Station (20 minutes away) or the Shin-Shibamata Station (15 minutes). However, if it happens to rain on the day of the event, the festival will be postponed to the following day, so keep that in mind if you’re planning to drop by! 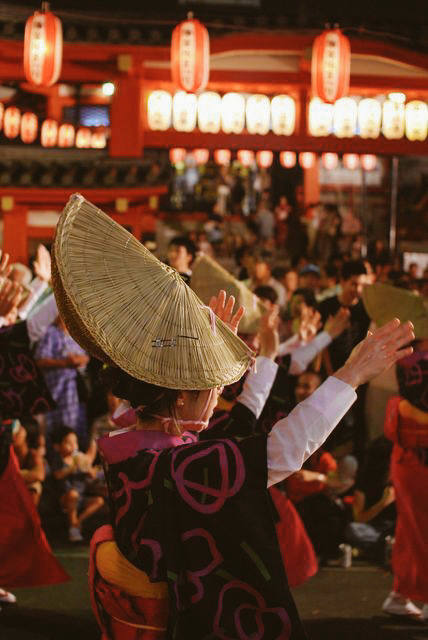 If you have a few days to spare during your trip, you should pencil in the Kagurazaka Matsuri festival in your plans! Heralded as the biggest summer festival in the trendy Kagurazaka neighbourhood, which is also known as Little Paris, this event is actually split into two parts. For the first two days, a Hozugi Market will take place at the Bishamonten Zenkokuji temple, where you can pick up a Japanese lantern plant, and enjoy food from the forty-something food stalls lining the street.

On July 26 to 27, the streets will come alive with the Awa-Odori Taikai, where over 20 dancers and musicians will take part and form a procession to dance along the Kagurazaka-Dori street, performing traditional Japanese dancers. To get to the street, alight at the Iidabashi Station and take the west exit. Also, if you wear a yukata, the summer kimono, you’ll also be able to enjoy special discounts from many of the food stalls and restaurants nearby!

In comparison with the Katsushika event, this particular fireworks festival is known to attract some of the biggest crowds annually in Tokyo. The event, which is Japan’s oldest hanabi, bearing a 400-year history, kicks off at 7pm and runs for a full 90 minutes with over 20,000 fireworks launched. It will also include exhibition fireworks known as shihake hanabi, where the skies will be lit up with images of logos and illustrations from the fireworks themselves.

As the festival draws about a million visitors every year, there are two venues from where you can enjoy the fireworks, which are launched near the Sensoji Temple. The first venue is near the banks of Sumida River itself, between Kototoi Bridge and Sakura Bridge; to get here, head off from Asakusa Station, which is about a 15-minute walk away. The second venue is between Komagata Bridge and Umaya Bridge, which is 5 minutes away from the Kuramae Station. 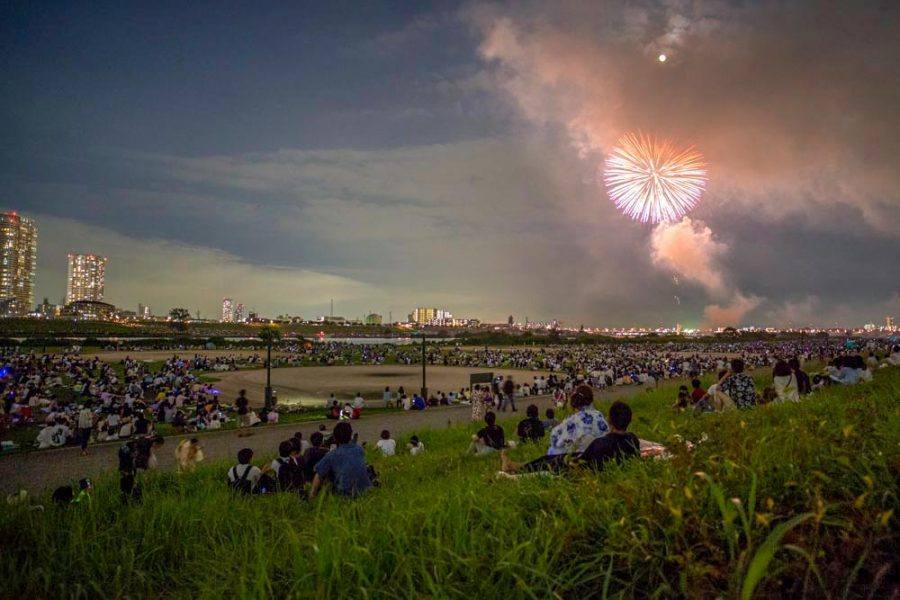 Summer really is a time to sit on a patch of grass covered by a blanket, and enjoy the evening skies burst into colourful explosions — or at least, it is in Japan. The Edogawa Fireworks Festival is ranked among the top of such events, and for good reason. With crowds rivalling that of the Sumida event, it’s no surprise that this is one of Tokyo’s most highly-anticipated hanabi!

The event runs from 7.15pm to 8.30pm, but it’s best to head here earlier, as the first minute will see an astounding 1000 fireworks launched against upbeat Japanese music as the background music. The majority of the crowds will gather at Toritsu Shinozaki Park on the banks of the Edogawa River, and in order to get here, you can alight at the JR Koiwa Station, which is about 25 minutes away, or the Shinozaki Station, which is a 15-minute walk. 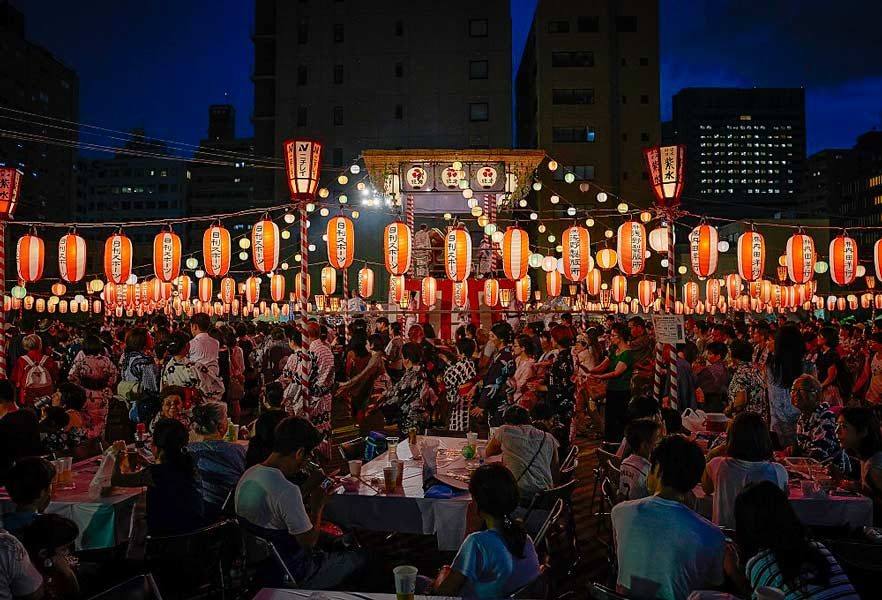 The Bon-Odori dance festival takes place across a number of neighbourhoods in Japan, but one of the biggest is undoubtedly the one held at the Tsukiji Honganji Temple! The event sees about 7,000 visitors from all over the country and internationally, and also takes place nearby the Tsukiji fish market, making it a prime spot for those looking for delicious food too.

The festival is a celebration of many kinds of traditional dance music, and there’s even a chance for you to learn how to dance from the professional dancers who dance on the Yagura, a high wooden stage. Enjoy the live taiko (drum) performances and don on a yukata as you stroll along the area and frequent the food stalls around the market. The event is held from 7 in the evening until around 9pm, and it’s only a minute away from the Tsukiji station.

If you’re looking for a break from the food and the fireworks, head over to the Kiyose Sunflower festival for a relaxing day of gazing upon thousands of sunflowers — around 100,000 of them, in fact! The flower festival is the biggest of its kind in Tokyo, with the fields covering a space of almost 24,000 metres, like a sweeping, brilliant blanket of yellows.

Entry is free, and fresh summer vegetables will also be sold here too, along with, of course, sunflower seeds! To get here, take the North exit of Kiyose Station, or the Seibu bus bound for Shiki Station South Exit, and get off at the Green Town Kiyoto Bus Stop. There will also be a free shuttle bus on Saturday and Sunday.

The Koenji Awa-Odori festival usually takes place on the last weekend of August, and it is an explosion of Japanese festival culture, dance and music. With over 10,000 performers parading down the streets of Tokyo in a colourful procession, there’s definitely enough rhythm, enthusiasm and festivities to bring the city to life!

The parade usually begins at around five in the evening will last around three hours, and a projected number of a million people are expected to witness the procession. So if you’re planning to enjoy the parade, be sure to get to the Koenji neighbourhood as early as possible to save your spot! The festival will be held in the surrounding area of the JR Station, so you can’t miss it! 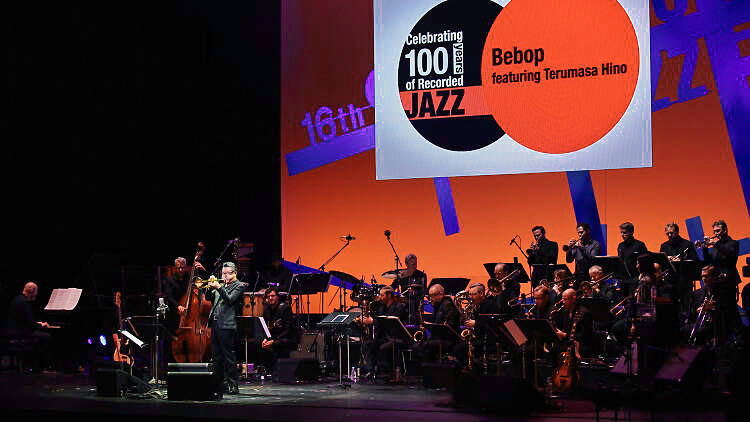 Technically, this particular event takes place from August to September, but that only means an entire weekend of great jazz music! In addition, while you can get tickets for the performances at the main venue, NHK Hall here, you can also enjoy the free gigs held at the outdoor stage in Yoyogi Park, along the Keyaki Namiki Street.

The festival will feature both seasoned musicians and up-and-comers, and perfect for anyone who wants to enjoy an afternoon or evening of wonderful music. To make the experience even more worth it, head over to the park in the late afternoon or evening to escape the heat! If you’re heading to NHK Hall, get off at Exit 13 of Shibuya Station; and if you’re hoping to catch the gigs at Yoyogi Park, you can get there from either the Harajuku or Meiji-jingumae Station.

Looking for a more casual vibe for your music instead? Don’t miss out on the Slow Live, held during the same weekend as the Tokyo Jazz festival! Held at the Ikegami Honmonji temple, the outdoor festival will see both local indie and established artists performing acoustic renditions of their songs, so expect a relaxing time of just laying back and listening to some great music. 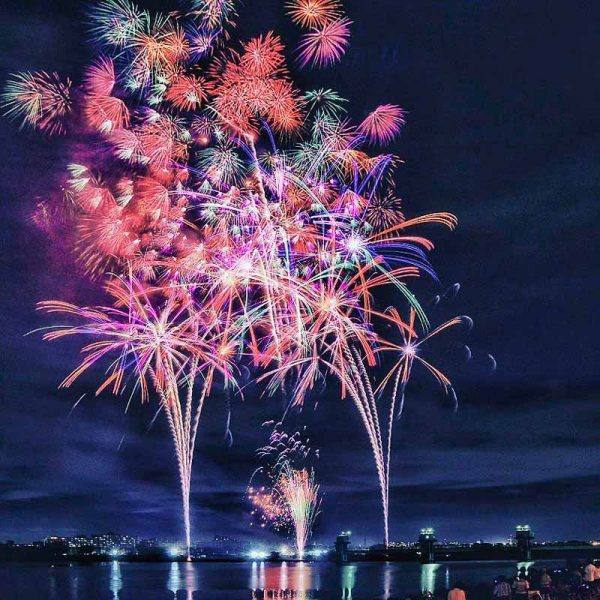 This might be cheating a little, but it’s still early September, when summer’s just beginning to cool and slowly give way to autumn, so it’s the perfect time to end the warm season with a fireworks festival! While the Chofu festival is less well-known compared to the other two on this list, but in no way is it less impressive either, with 10,000 fireworks being launched during the event.

To get the best view of the fireworks, head over to the grassy banks of the Tama River, which is iconic for being part of several film scenes shot here, and Chofu is also home to numerous studios and film-related companies. Experience breathtaking views of the night sky, choreographed to popular film scores in a hanabi-illusion, where music and fireworks come together in a blast of colours! To get to the venue, alight at Keio Tamagawa Station, which is only a 5-minute walk, or the Chofu Station, a 20-minute walk away.

Will you be heading to Tokyo this summer?

Thinking about booking a flight ticket to visit the city? We’ve also compiled a couple of ways for you to head to Tokyo and experience these amazing festivals this summer!

Royal Brunei Airlines (RB) flies directly to Narita International Airport in Tokyo, which is a little under two hours from the centre of the city.

You can also fly using AirAsia, but you’ll have to fly from Kuala Lumpur to do so, and you’ll arrive at Haneda International Airport instead. The journey from the airport to the city takes approximately an hour or less.

What are you waiting for? A host of amazing and colourful summer festivals in Tokyo awaits!

Let us know your thoughts in the comments below or on any of our social media platforms, Facebook or Instagram.