Music truly transcends language, and nothing showcases that better than the hot collabs that have been propping up between K-Pop and Western artistes, especially in the last couple of years alone. With the advent of BTS’ works with Nicki Minaj and Steve Aoki, as well as Blackpink’s track with Dua Lipa in 2018 alone, the music industry in both South Korea and in the West have begun to herald an era where creative partnerships are not only possible, but they can potentially bring out something new, different and amazing as well.

This year has been nothing less than incredible for K-Pop and Western artistes working together, so let’s dive into Neue’s list on what 2019 has to offer for collabs from your favourite artistes so far!

1. Red Velvet with Ellie Goulding and Diplo (‘Close to Me’ remix)

Out today? with cutie @elliegoulding ?

Ellie Goulding’s hit song ‘Close to Me’ gets a new makeover in this version with one of South Korea’s top girl groups currently, as Red Velvet lend their voices for the song, taking the place of original collaborator Swae Lee. The song features both Korean and English lyrics seamlessly fitting together on this fresh take of Diplo’s production, and definitely a great addition to your summer playlist! While there’s no official music video, the ‘Close to Me’ remix  is available on iTunes, Google Music and Spotify.

Perhaps one of the most surprising collabs to have come out this year is when Jason Derulo enlisted the partnership of K-Pop acts EXO’s Lay and NCT 127 for the upbeat dance track ‘Let’s Shut Up & Dance’! In addition, the single is also part of a tribute to the late Michael Jackson, and has an encompassing international flavour, seen most visibly with the mix of underground street dancers and professionals across South Korea, Ethiopia, Jamaica, London and Los Angeles.

Coming from a series of incredible collaborations with BTS with the Mic Drop remix, featuring on The Truth Untold and then having members RM and Jungkook featuring on his track, ‘Waste It On Me’, Aoki’s set his sights on boy band Monsta X for another catchy hit song. ‘Play It Cool’ employs Monsta X to sing in English, but no matter the language, it doesn’t take away from the fact this song is a banger, and makes for the perfect soundtrack when you’re cruising down the highway.

RM is no stranger to collaborations with Western artistes, from rapper Wale to Fallout Boy, and his first partnership with Honne was actually on his second mixtape, RM when they helped produce the track ‘Seoul’. The British duo enlisted RM to rap a verse on the remix of their popular song ‘Crying Over You’, adding to the emotionally reflective mood of the song. Honne also shared, “We always wanted a rapper over ‘Crying Over You,’ so it was great when RM was up for featuring on the track,” the band said. “The part he’s written has continued to explore, and add to, the emotion of our original version.”

BTS has only continued to dominate the market when it comes to collaborations with Western artistes, to the point where they’re releasing an album filled with soundtracks for their newly released mobile game, BTS World by Netmarble. ‘Dream Glow sees three-fourths of BTS’ vocalists Jin, Jimin and Jungkook teaming up with Charli XCX for a track that’s sure to leave you starry-eyed with its hints of EDM and their crooning vocals. The track is available on iTunes, Google Music and Spotify.

Joining the list of collaborations for the BTS World soundtrack album is Zara Larsson for the track ‘A Brand New Day’, which debuted at an explosive 10,000 downloads on Billboard’s World Digital Song sales chart. The collaboration is made even more significant thanks to the inclusion of the Korean flute, daegeum, and it’s just a genuinely warm, bright song to groove to! ‘A Brand New Day’ is also only available on iTunes, Google Music and Spotify. 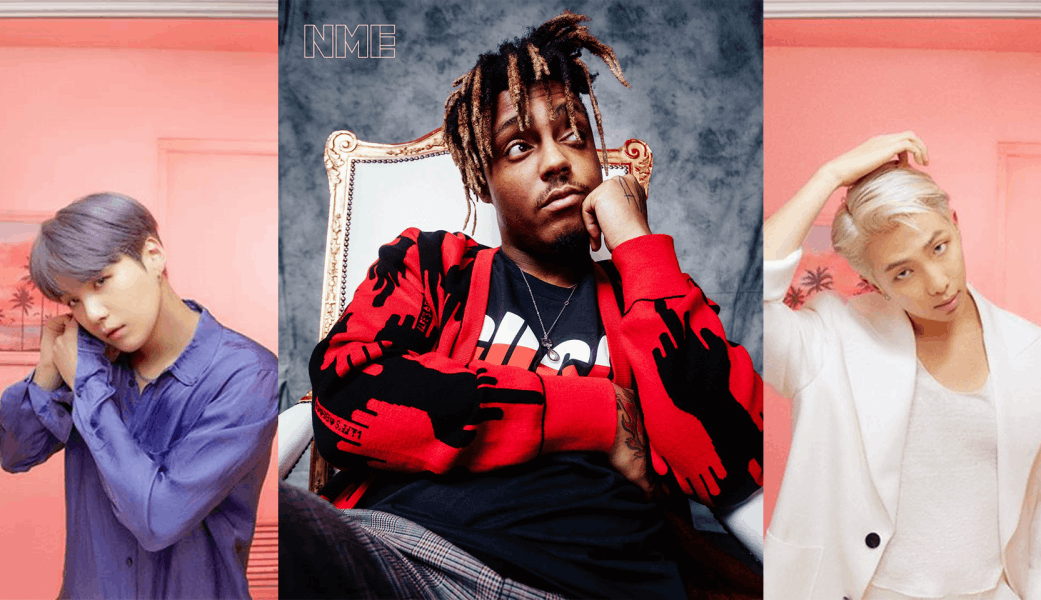 Rounding off the list of the aforementioned BTS World soundtracks is ‘All Night’, featuring rapper Juice WRLD. Rappers RM and Suga take on this song with smooth flows on a groovy, hip-hop track and meld seamlessly with Juice WRLD’s verses. The song, filled with mellow vibes, begins with RM describing the song as ‘fan mail’ for their large and loyal fanbase, ARMY, before delving into their own dedication for their craft. Personally, I could listen to this one all night long! This track is only available on iTunes, Google Music and Spotify as well.

With over 413 million views and 11 million likes on YouTube alone, there’s no denying the star mega power that BTS and Halsey bring together in the K-Pop band’s most recent title track, ‘Boy in Luv’! Their partnership has arguably set the standards for Eastern-Western musical collaborations, with Halsey actively participating in the video, choreography and harmonizing on the Korean hook, as well as writing the English lyrics too. From the all-pink ensembles and the all-too-catchy chorus, this is definitely one song that’s not going to leave the charts (or my brain) anytime soon.

Who do you wish to see collab?

Personally, I’m hoping to see Korean band DAY6 maybe rock it up with the likes of Panic! At the Disco one day, but what about you? Is your favourite K-Pop and Western collaboration on this list? If not, let us know! We’d love you hear your thoughts, so go ahead and put them down in the comments below, or on any of us social media on Facebook or Instagram.