Malay food is one of the well-known cuisines in Southeast Asia, mainly because it links to the Nusantara countries, which include Malaysia, Indonesia, Singapore and Brunei Darussalam.

Even though the countries mentioned above each have their own “localised” cuisines, we can still categorically classify them as “Malay cuisine” because of the similarities shared by the people.

One of the main characteristics of Malay food is that it is aromatic and has strong flavours – sometimes even spicy because of the herbs and spices typically found in Southeast Asia.

Malay food is typically eaten together with rice because it’s a staple for the Malays. Some of the popular Malay dishes are chicken curry and beef rendang. The same dish may have different variations depending on the country – for example, Indonesia and Malaysia may each have their own versions of beef rendang.

A favourite ingredient of the Malays is none other than coconut. Don’t be surprised if you see a lot of Malay dishes and desserts containing coconut. (I guess you could say that they are just nuts for coconuts! Can’t blame them! After all, coconut milk, for instance, can make any dish rich and creamy… Yums! Haha!)

Now let’s take a closer look at some of the well-known Malay dishes and desserts with a modern, Western twist!

Asam Pedas is a classic Minangkabau and Malay dish. As the name implies, it is a sour and spicy stew that typically uses fish. Some sources say it originated from Indonesia but I believe that it is popular in Indonesia and Malaysia, as well as Brunei.

It is usually served as a main course but Le Keris puts a twist on this dish by making it is a starter. Also, instead of using fish, they opted for a prawn wonton tortellini. There are okra (also known as “ladies fingers”) in the bisque, which is one of the main ingredients for Asam Pedas.

Taste wise, I’m not usually a fan of Asam Pedas because of the sourness, but I really enjoyed this Asam Pedas Bisque of theirs! It’s not overwhelmingly sour and spicy… which is great to me. And the tortellini is tasty!

Now, this kari ayam is really a very modern interpretation of the classic Malay dish. The chicken roulade is smothered in a light and creamy curry velouté. There are different seasonal vegetables which include purple cabbage, baby corns, carrots, broccoli, mushrooms and etc.

The roti jala is put on top of the vegetables and it is stuffed with potatoes. There are different versions of roti jala, some are stuffed and some are not. Roti jala is also called Malaysian Net Crepes because it originated from there. The non-stuffed roti jala is usually eaten with chicken curry, thus a similar concept with this dish.

This dish has some French influences from the chicken roulade to the curry velouté. These are French techniques used for a Malay dish. Even the curry itself tastes different from the typical Malay curry. 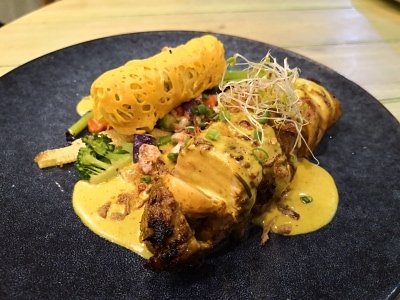 Rendang, as you all know, is a Malay signature dish. Rendang is a rich beef stew made with spices and coconut milk. It’s usually not as saucy but it’s explosively flavourful!

The twist by Le Keris is making this dish as a lasagne and honestly, it just works since lasagne is using beef with sauce. Since they are using minced beef instead of meat pieces, the experience is a bit different but the taste is what you would expect from beef rendang … which is amazing!

The minced beef rendang is spread in multiple layers of pasta sheet with a dash of coconut cream on top to add richness and fried crispy onions to add some crunch … My goodness, this is lasagne on ANOTHER LEVEL!

This dessert is a very abstract representation of the well-known Malay kuih “tart nenas”. At the bottom, there are streusel crumbles topped with caramelised pineapple ice cream, pineapple droplets and drizzled with honey. The ice cream is really good. It’s very sweet and there are traces of actual pineapple! It’s really nice when eaten together with the streusel, as the streusel doesn’t have much taste to it.

In all honesty, I’m not really a big fan of the original tart nenas. But this … I wouldn’t mind having it again and again!

This dessert is another ‘out-of-the-box’ interpretation of the traditional kuih “Puteri Mandi”. There’s a rectangular pandan mousse covered with coconut shreddings. There is also a cake and gula melaka jelly inside. Apart from the pandan mousse, there are pandan custard, gula melaka butterscotch and coconut ice cream decorated on the plate. A very modern take on the traditional kuih indeed.

The experience is obviously different from eating the actual kuih but the flavours are there such as the pandan, coconut and gula melaka.

So what are your thoughts on these modernised, Westernised Malay dishes and kuihs? Are they great? Do you like them or you still prefer them in their original form? Personally, I like them because it shows the creativity of the chef in making these dishes. Kudos to them plus they taste good too!

They have several other items to offer with the same concept as well, so do check out Le Keris to have a guaranteed gastronomic experience! They are located on the first floor at Kiulap Mall. Follow @le_keris on IG for more info.