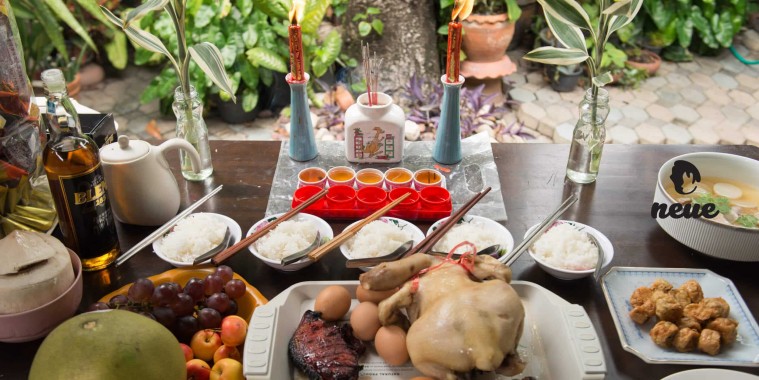 These two words, when put together, can mean different things to different people, depending on their culture and beliefs.

Traditions vary according to region but, in Brunei, the Chinese often offer food, incense, candles and paper offerings to the dead. At Chinese temples, for instance, performances are held to entertain the ghosts. (This is why you’d see empty seats at the front row!)

So what’s the origin of the hungry ghost festival? 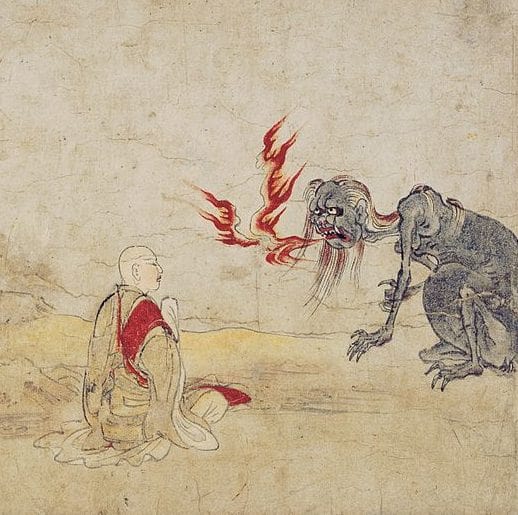 Well, according to one version, it all started with a monk some 2,600 years ago. He was a Buddhist monk with supernatural powers, who wanted to trace his deceased mother.

However, he found her in one of the lower realms as a hungry ghost.

Apparently, during her lifetime, his mother had spent all the money he had given her to provide for visiting Buddhist monks on her own pleasures.

While disappointed with her actions, the monk begged his master for help in getting his mother out of the underworld.

Fortunately for the monk, his master was Buddha himself.

Apparently, prior to being taught the “proper way” to feed the ghosts why Buddha, whenever the monk gave food to his mother, the food would burst into flames (or turned to charcoal in an alternate version of the story).

According to some versions of the story, the monk’s mother was eventually reborn as a dog of a noble family.

This was when Buddha instructed the monk to offer food and robes to 500 other monks, a good deed of such proportions that it merited a human birth for his mother. And thus, the day of offering became known as Ghost Day.

Not to be confused with Ching Ming Festival

Ching Ming Festival or Qingming, on the other hand, is a special Chinese day for the remembrance of ancestors. In 2019, this day was observed on April 5.

Ching Ming literally translates as ‘clean and bright’, and this is the day that Chinese people sweep the graves of their ancestors. The festival is an important ancestor worship ritual that also requires families to weed graves, touch up headstone inscriptions, make offerings of food and light incense.

Traditionally, many people burn paper offerings at gravesites during the festival for their ancestors to use in the afterlife.

The Hungry Ghost Month, on the other hand, is when ALL restless spirits roam the earth.

This is why during this time, people would burn paper money and make food and incense offerings to make sure they are back in the good graces of their ancestors as well as any other wandering ghost that may happen to drop by.

Some people believe that during Chung Ming, the spirits are only allowed to roam the vicinities of their grave, whereas during the Hungry Ghost Month, they are allowed to go ANYWHERE.

When asked what her thoughts were about Hungry Ghost Month, Bruneian Eats, a long-time friend of Neue, said: “It’s probably related to paying respects and remembering family members who have passed. That’s what I’ve always viewed it as … a time to reflect, be respectful of the spirits and just a time to not do anything stupid.”

Last week, Neue published a story about a man in Kuala Lumpur who was mistaken as a “ghost” while he was taking a stroll during the Ghost Month.

Bruneian Eats shared a disturbing story about an encounter with a woman with long dark hair who wanted her to find her bones! She was responding to an IG story post on @whatsneue. 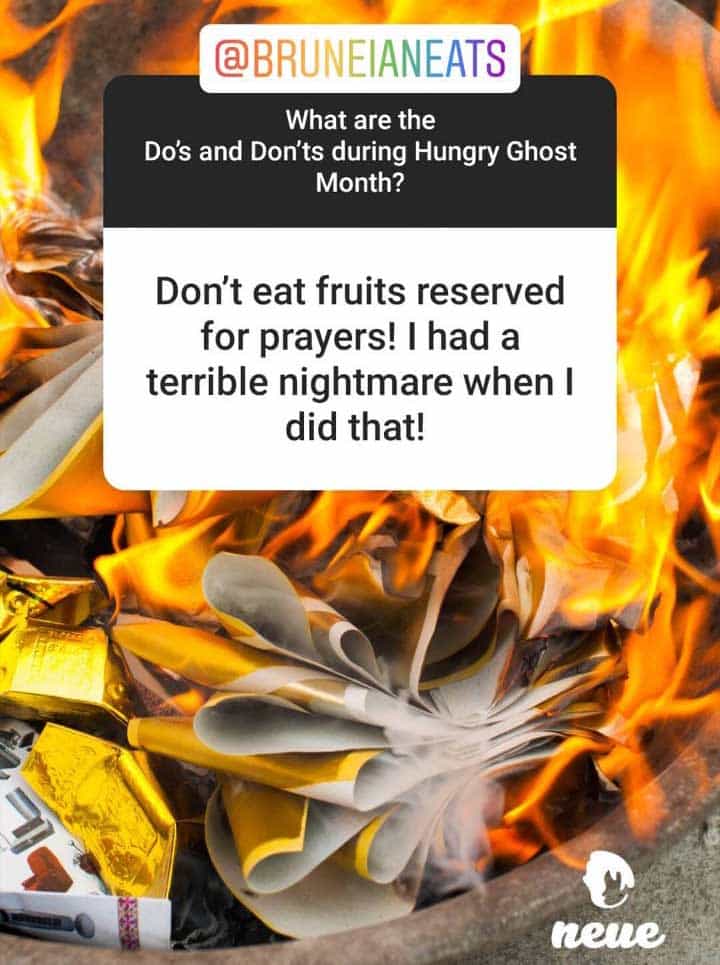 “I accidentally ate an orange that was supposed to be saved for prayers later in the evening.

“My mom had to rush back out to buy more oranges and I didn’t think much about it.

“But that night I had a nightmare about a woman with long dark hair and ragged white clothes sitting at the door of the room I was sleeping in.

“She kept telling me to find her bones that were buried somewhere or she would hurt me and my brother (who was sharing the room with me).

“So I kept apologising and saying I couldn’t find her bones and tried praying her away.

“But she started cackling and screeching and telling me it wouldn’t work.

“I woke up covered in sweat but brushed it off as a plain nightmare and went to school.

“Halfway through the morning at school, I developed a fever and had to go home.

“Later that night I refused to sleep in the same room and went to a different room and told my parents I wanted to sleep with the lights on.

“Conveniently, the light switch broke and I had to sleep with the lights off and my door wide open. Thankfully nothing else happened after that!”

What are your thoughts about Hungry Ghost Month?

Do you know another origin story for this festival? Do you have a creepy story to tell?

What are some of the Do’s and Don’ts during the Hungry Ghost Month that you know off?

Tell us in the comments below or reach out to Neue on Facebook or Instagram. You can also drop an e-mail here.