9 to 5: What’s Neue with TheEllewan

They started off as school friends and over time, their relationship eventually blossomed into something so much deeper … they became harmonic partners!

Say hello to TheEllewan (@The_Ellewan), a local folk indie duo made up of Michelle and Erwan who first met each other during their secondary school years at St Andrew’s School where they performed their first gig together.

During their A-Level school years at Maktab Duli PMAMB, the two-man band pursued their music more earnestly. TheEllewan hopes to inspire a deeper appreciation for music in the community around them. And in doing so, encourage and motivate others to pursue their dreams as well! 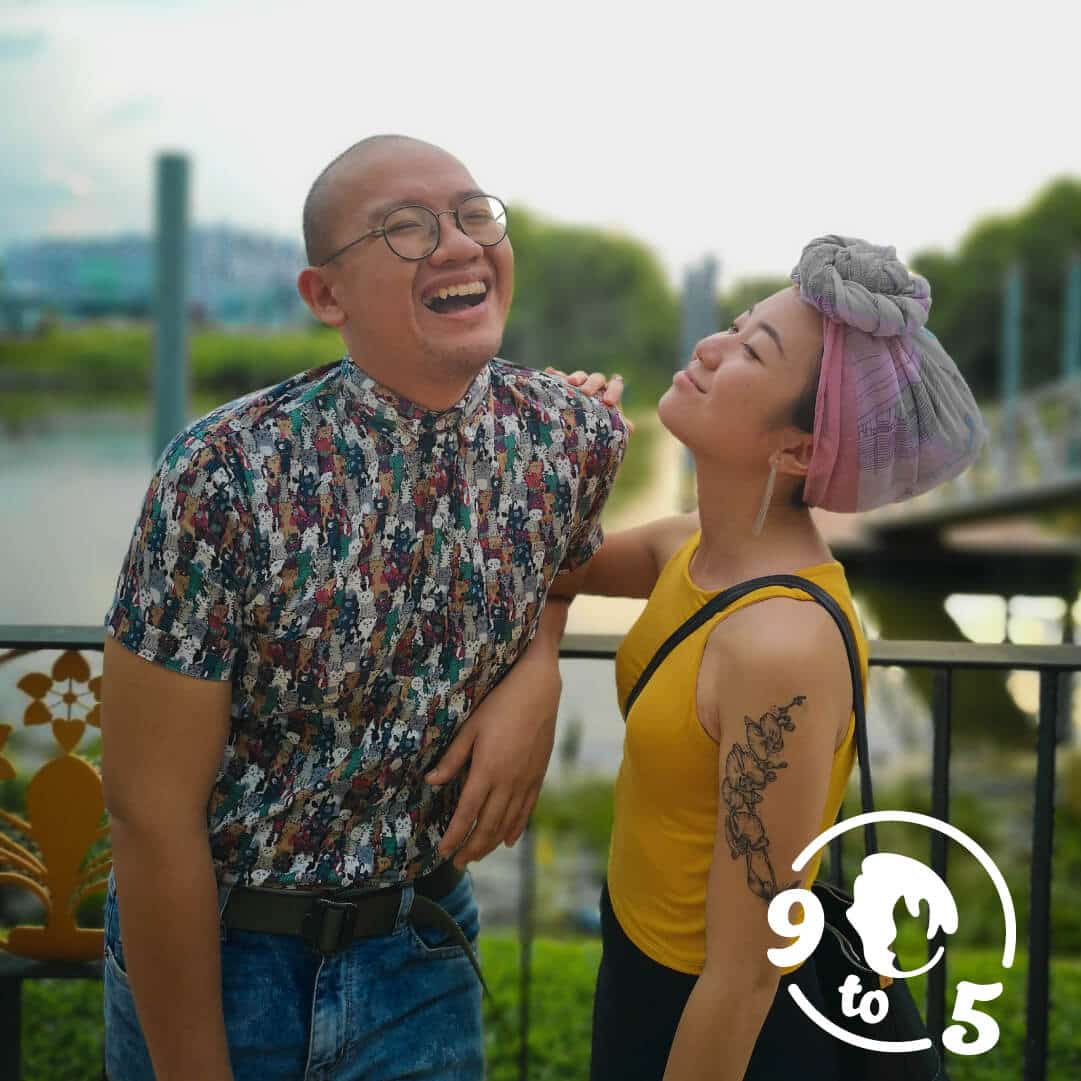 1. Let’s go back to the very beginning. How was life like before ‘TheEllewan’ was formed?

Michelle: Life was much more peaceful and regular before Erwan and I formed the band. And then I met the whirlwind that is Erwan.

Having said that, I always felt that I needed an outlet to create and express myself and I found that with Erwan through ‘TheEllewan’.

I think it’s in every creative person, we need to create.

Even if it’s fights between one another or a beautiful melody … one never knows what one can accomplish until one tries. It’s quite exciting!

Erwan: It was pretty mundane. I started singing since I was around 7 years old … but back then, it was more like Karaoke-style.

I honestly found a sense of purpose after ‘TheEllewan’ was formed.

For me, it was not just to fill time but rather, to give my signing, a purpose.

Also, I used to sing for free. At least now, I’m getting paid to do it! Haha!

2. How did you come up with the name ‘The Ellewan’? Is there a story behind it?

Michelle & Erwan: The story isn’t as grand as one would think. We didn’t want to come up with another name to call ourselves. All we were really going for was Michelle & Erwan or vice versa.

3. Knowing what you know now, what would you have done differently in the past? Please do not say, “I won’t change a thing” 😉

I would definitely put more effort into cultivating my music skills, both in singing and playing instruments.

As far as music is concerned, I wished I had started experimenting with more sounds much earlier in life. Who knows? Perhaps I would have honed my own sound. But hey! We can’t change the past. It is what it is! 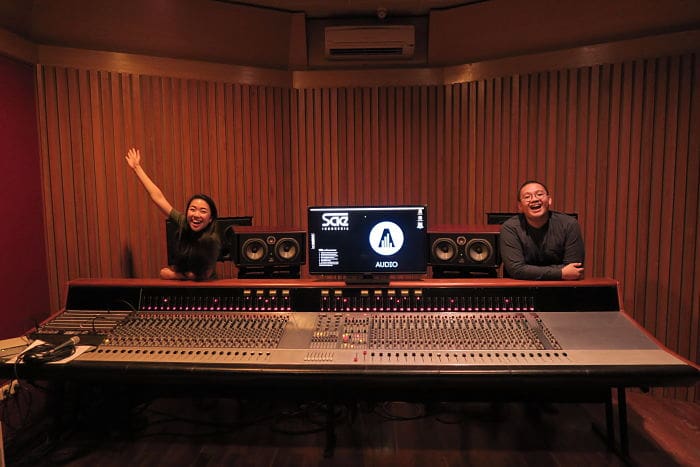 Erwan: Hmm … I’d probably have gone with SOMEONE ELSE as my duo partner! Haha! Kidding! (Please don’t kill me Michelle!)

I’d sign up for proper music lessons while my brain was still “soft”. Now that I’m older and that my brain is now “harder”, I now find it trickier to “soak in” new information.

Hmm … I’d eat less too, take proper care of my (precious) hair and slap on some hair tonic at a much earlier age. Why? Well, because I’m now fat and bald. Haha! But hey! I’m still awesome!

4. Please share your observation about the local music scene?

Michelle: It’s super young but boy, is it growing! It’s so encouraging to see other artistes do their thing, whether it’s performing or sharing their original music online.

I think everyone is still trying to find their “own” music and voice because we, ‘TheEllewan’, sure still are!

Unfortunately, the music scene in Brunei isn’t quite there yet. There’s no proper recognition and not much platform for performers here to showcase their talents.

Thank goodness for social media! Bruneians need to learn to use it wisely so that they can showcase their talents and inspire people. Who knows? Perhaps they’ll eventually get signed by a recording label!

5. Do you have any funny or silly stories to share?

Michelle: Whenever Erwan and I go on road trips, we’d have our own version of ‘Carpool Karaoke’ where we would try to sing as offkey as possible.

Sometimes we’d also play a game to see which of us can garner the most “looks” from people in other cars. So far, Erwan is the reigning champion!

Erwan: Everytime I call for takeaway or to book a table, the person on the other line would ALWAYS refer to me as “Mam, Mom or Ms”. And if they ask for a name, I’d always use Michelle’s name or my other friend’s name, Tiara.

6. What is a social issue that should be looked at in Brunei?

Michelle: I think mental illness should definitely be talked about more.

I mean, we shouldn’t wait until it progresses to a serious life-threatening point for us to look into it.

The world we’re living in is constantly changing and that can be stressful to keep up with.

We need to listen to understand, and not listen to correct.

I mean, we’re all newbies at this life thing.

Erwan: Bullying, be it cyber-bullying or physically, especially during one’s teenage years! This can really mess up people’s lives and their state of mind. Tackling bullying should be taken seriously because even the smallest of insults could one day grow into something big.

Michelle: Yes! Both Erwan and I work at Hoco Agency. I’m a producer and copywriter. It’s exciting work some days and tiring work always. But being in the creative industry allows me to still hang on to that manic side of me and sometimes can even spur me on to create music. On some days, it can feel like we are making lots of sacrifices because no one really has enough time, right? At the end of the day, I guess we just have to make time for the important things in life.

Erwan: I’m fortunate enough to be able to work in a creative industry *sarcasm intended*. I work mostly with video shoots and editing projects.

8. What would you like to say to all our Neue readers? Do you have any words or inspiration or a life story you’d like to share?

Michelle: I hope that whoever you are and wherever you are in life that you DON’T STOP GOING!

If there’s something you’re passionate about, then pursue it. If it matters to you, then do something about it. You don’t have to have all the answers. You just have to be willing to mess up, get up and try again.

This is your life so make it a great one.

Erwan: Back in secondary school years (when I was in Form 3 or Year 9), I remember how lost I felt as I was extremely stressed out studying for a commerce exam. (Last minute studying obviously! Haha!)

I remember sighing loudly almost every other minute.

After some time, my mother walked up to me. (Probably she was annoyed at the noise I was making! Haha!)

She told me: “Just stop studying. Tomorrow’s another day. A new day. Worry about it tomorrow!”

To this day, I still hold on to what my mother said back then.

So whenever you are faced with a difficult situation, just take it easy. After all, tomorrow’s a new day!

9. What’s your hope for up and coming singers in Brunei? 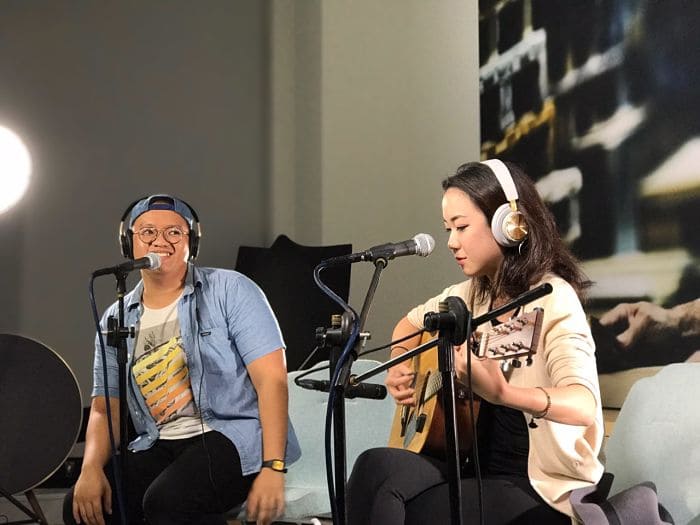 Michelle: I hope that we learn to be kind to ourselves and value what we put out there. We are our own worst critics.

Let’s not get in our own way, but instead focus on setting achievable goals and keep moving forward no matter what. If you have a gift, share it!

Erwan: I hope singers in Brunei can come together and support each other even if they are from different genres.

It’ll be great to have a supportive community, especially in the field of music. Not only would we be able to keep each other in check, we’d also be able to hold each other up so that we do not give up on our dreams!

Michelle: I’d say that, it can be 50/50. Some days Erwan is the voice of reason while I go haywire. Other days I need to hold the boy while he spirals. He’ll probably disagree with whatever I say but that’s what all crazies say.

Erwan: On most days, I’m the sensible one. Haha, not! After years of knowing each other, we came to the conclusion that we’re almost alike in our personality. So on some days I’m the more sensible one, and on other days, it’ll be Michelle.

2. What animal would be the most terrifying if it could speak?

Michelle: I think an ant-eater would be quite terrifying because it would spit ants as it spoke. I’ve got a phobia about ants crawling into my ears and making a home for themselves in me!

Erwan: Imagine mosquitoes that could talk … hundreds of them coming together and buzzing around your ears! The introvert in me would surely go nuts!

3. If you could come up with the next viral challenge, what would it be?

Michelle: I personally love ASMR so maybe an ASMR-related challenge would do the world some good. Like ‘opening a door ASMR’ or ‘ being good person ASMR’. Whatever would make people more calm and less antsy! *claps in ASMR*

Erwan: #runaoke (Karaoke while running). The challenge is to finish one whole song, flawlessly … while running of course!

4. What did you think was “cool” back when you were a kid?

Michelle: I used to think being indifferent was cool … until I realised that if you stand for nothing, you’d fall for anything.

Erwan: Hands down … it would be Michelle. I thought she was cool back then. But now, just so-so. Haha! Kidding!

But seriously though, I thought boot-cut pants were cool back then.

5. Tell us something surprising about yourselves. 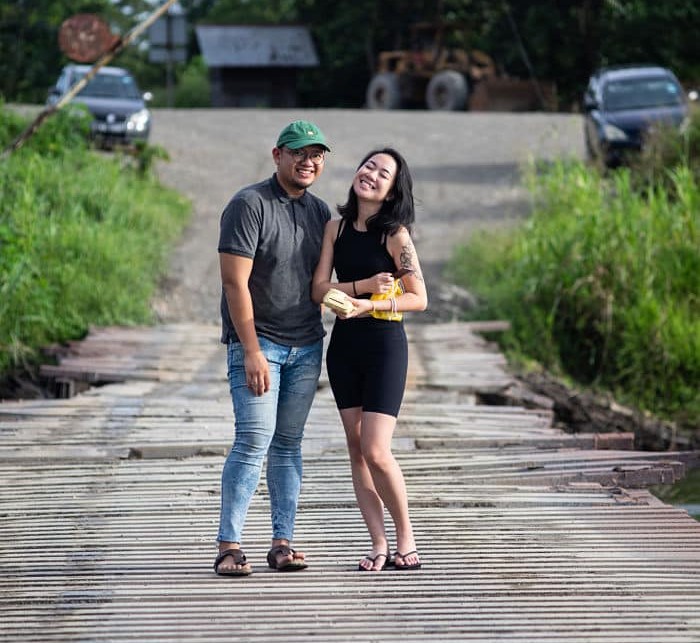 Michelle: Erwan here, I think it’s quite surprising that Michelle and I have been friends for 11 years now! And after knowing her all these years, she’s surprisingly strong.

She may tear up easily, even when watching some lame chick flick, but she’s more than what meets the eye.

She can pick herself up … she’s strong and independent, in whatever situation. Strong-willed, inspiring woman.

Erwan: Michelle here! I think one surprising thing about Erwan is how he’s actually a big softy inside.

If I’m in a pickle, he won’t hold back the tough-to-hear advice but also counter it with understanding and love.

I never imagined how we would develop the kind of friendship we have today, because we are quite different. He’s a coffee drinker and I’m a tea person, he’s bigger in size and can fling me across the room easily. (It has happened before!)

However, I guess also as creatives, we have a mutual understanding … a kind of struggle and melancholy that not everyone gets.

So no matter the differences or similarities, I am grateful to have him in my life, not just as a singing partner but as a dear friend. (By the way, I had to write this because he couldn’t think of what to write. Nevertheless, what I wrote is true. Love you Erwan!)

Would you like to be featured next? Or would you like to nominate someone you admire to be interviewed? You can get in touch with Neue by dropping an e-mail here or tagging them on our social media platforms, Facebook or Instagram. (Photo at top of page courtesy of @philiphayashi)