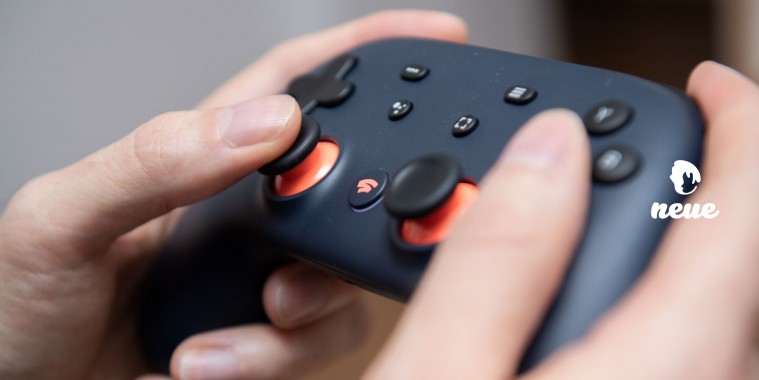 Google has just launched what all console makers want and don’t yet have: a running platform for cloud gaming.

You now officially no longer need to invest in expensive hardware to run top games.

Instead, all you need is Stadia, which remotely runs the game for you and streams it to your TV, laptop, smartphone or whatever you want to play it on. 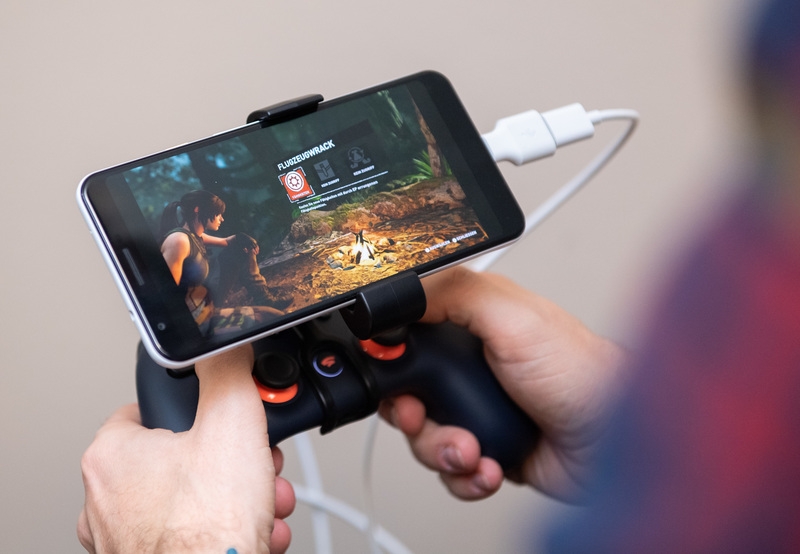 Stadia is still tangled up with cables on smartphone: There’s no support for a wireless controller connection yet (Photo: Andrea Warnecke/dpa)

Anyone who pre-ordered the Founder’s or Premiere Edition (consisting of a controller, a Chromecast Ultra for TV streaming and three months of free 4K gaming) can start playing.

(*Editor’s note: With regards to Google Stadia’s availability, at launch Stadia will only be available in 14 different countries, including the US, Canada, the UK, and select European countries. Brunei Darussalam is NOT included in the list, but fingers crossed, it will be in the near future!)

A slow but rewarding setup

When the controller finally arrives, you’ll find your Stadia hardware packed up in a nondescript white box. Unpack, take out the controller, plug the Chromecast Ultra into your TV, install.

Are we done yet, can we finally play now?

Ehm, not quite. You still need to set up your account and pick a username and avatar. Then you have to link your account to the Chromecast Ultra, and then the controller to the TV.

If you have a knack for setting up hardware and software, you’ll manage. But somehow we expected it to be easier to set up the future of gaming, as it has been talked up.

After a while scrolling through the Chromecast settings, the login code finally appears on screen. You confirm with a few controller buttons and now, at last, you are ready to play.

Oh wait, now you have to buy a game. 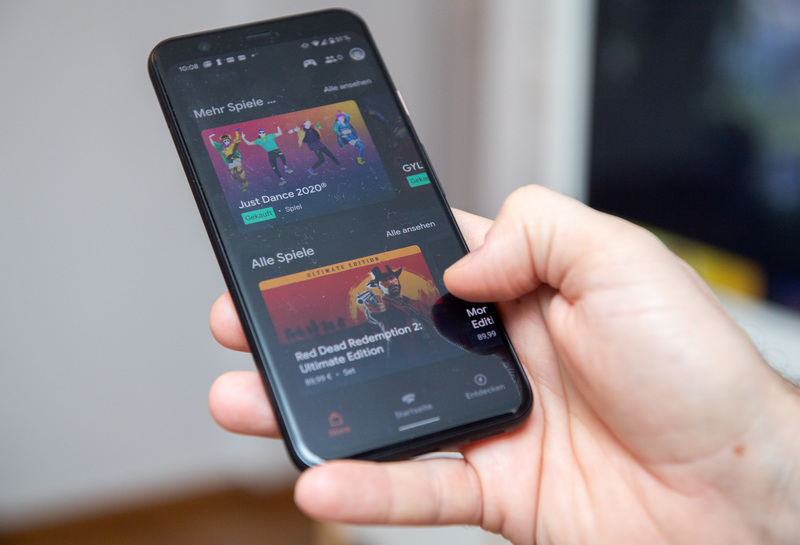 To buy a game, you need to take your smartphone out: If you play at Stadia on your TV, you have to use the mobile app to buy new games (Photo: Andrea Warnecke/dpa)

Off to the online shop we go. There are 22 titles to start with, including some epic ones like “Assassin’s Creed Odyssey” and “Red Dead Redemption 2”, as well as the three latest in the “Tomb Raider” series.

Further games are to follow by the end of the year.

Compared to the well-stocked game libraries of Sony, Microsoft and Steam, this is still a bit poor, but remember Stadia is only just getting started.

To buy a game or redeem a code, you have to switch to your computer or the Stadia app on your phone – you can’t do it on TV yet.

A game costs roughly between US$20 and US$60, and you can get a discount of up to 50 per cent if you’re paying the 10-dollar monthly pro subscription fee for 4K gaming.

If you don’t want to pay for the premium package, you’ll have to wait until next year, when the base service launches.

Enough with the hardware talk: How does it play?

Where it really counts, Stadia delivers, and gameplay is smooth and response time fast.

The endless desert expanses of “Red Dead Redemption 2” look fantastic on a living room TV. Lara Croft can hop and jump through Peru’s jungle in “Shadow of the Tomb Raider” in 4K without problems.

All in all, load times and display quality are impeccable and we only noticed the occasional display glitch.

But for all this to work, you of course need a GOOD Internet connection, and one that doesn’t have a low data cap, since you’ll likely be streaming several GBs per hour at 4K.

Our test system was connected on 50-Megabit DSL, and if you have a recent enough WLAN router at home, you should be able to play with a decent quality. 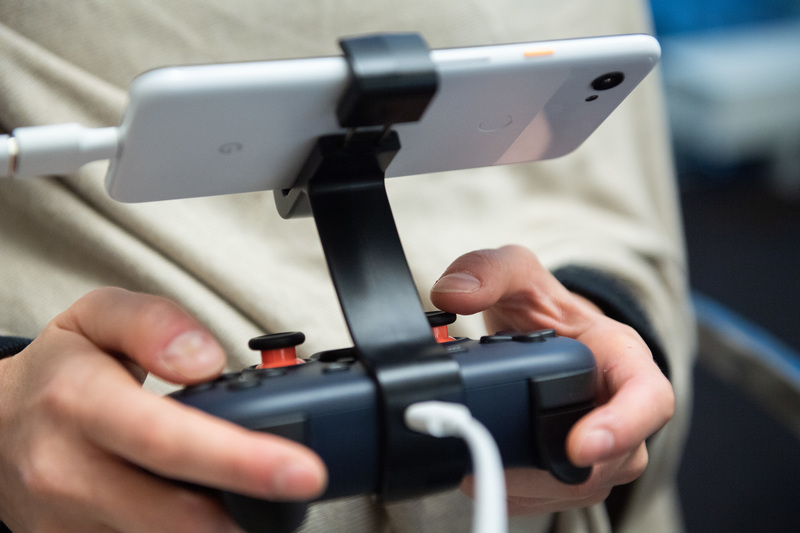 Google Stadia is not yet quite ready for gaming on the go and WLAN access is still required on compatible smartphones (Photos: Till Simon Nagel/dpa)

You only really notice that you’re playing online when you switch to a poor connection, for example at a cafe or in your office. Pretty soon your stream will suddenly hang or slow down and there’ll be a delay between button presses and what you see on screen.

A more limited Internet connection (10-20 Megabit) will still be enough for gaming at 1080p.

On Google’s Stadia page, you can check whether your connection is good enough for 4K, which will help you decide if you need to pay the premium.

Right now, Stadia is a bare-bones gaming service that is missing much of what it needs to be a fully-fledged alternative to a console or gaming PC.

Friends lists, achievements, family mode and numerous other functions teased by Google earlier this year have yet to appear.

The same goes for Stream Connect and Crowd Play. These will allow you to see your friend’s livestream or jump straight into someone else’s game at the push of a button.

Together with Google’s video platform YouTube, Stadia has enormous potential for community gaming, but the emphasis is still on potential.

Meanwhile on the hardware front, truly wireless gaming will only be possible later, beyond playing with your TV, and you’ll have to hook up to the controller to your phone via USB. 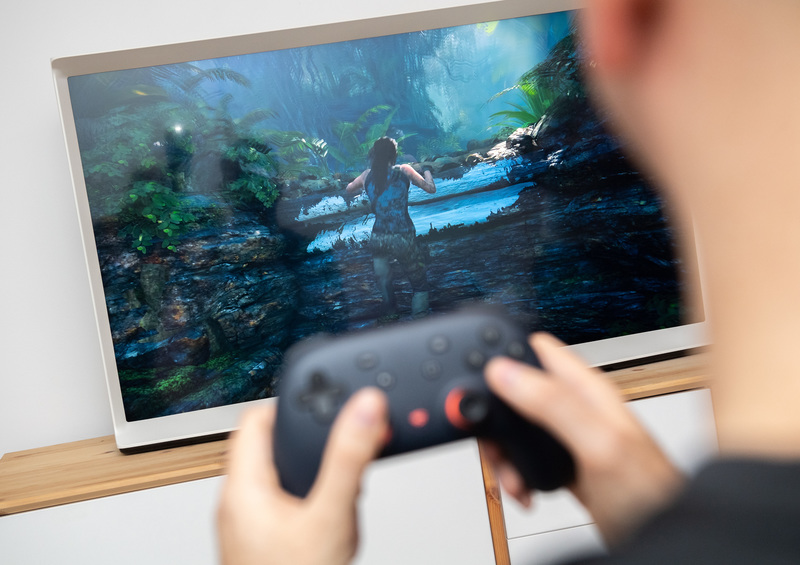 Even a fast game like “Shadow of the Tomb Raider” runs smoothly on Stadia (Photo: Andrea Warnecke/dpa)

Stadia will later run on all iOS and Android devices, but for the time being you can only play on Google’s Pixel 3, 3a and 4.

It’s unfair to make judgement on Stadia at this early stage, as it has only just made a soft release of sorts.

But on the technical side, you can’t deny Stadia delivers on the huge feat of providing smooth gaming over the wire (provided you have fast Internet).

A big catch is the choice of games, which is still rather limited. Even if the range grows, you’ll find a bigger, cheaper selection elsewhere.

If Google can improve here, Stadia will probably be on par with Playstation, Xbox, Switch and PCs for gaming.

If Google improves the usability and delivers the promised features, nothing speaks against Stadia becoming a top choice for gamers.

If Stadia is consistently developed like other Google services, then the notion of buying a console could be history in four to five years.

Do you think Stadia will be a success in Brunei? Do you have a fast enough Internet connection to handle it?