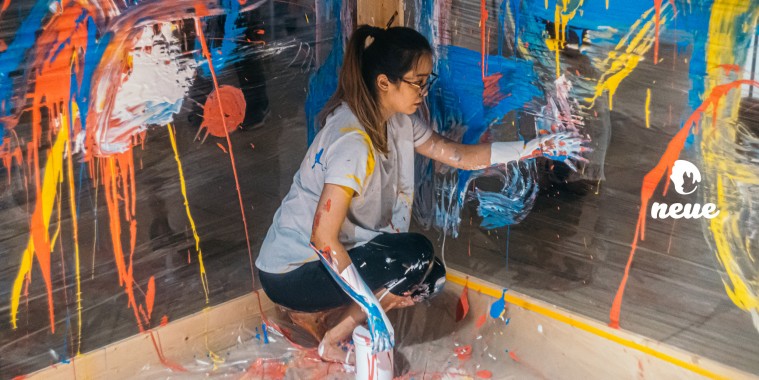 This thought-provoking question has been etched in my mind ever since I attended a collaborative art show called “45/7: Alinea” (pronounced as 45 past 7) earlier this month.

Oh! Fun fact: Alinea is Latin for “off the line” and is another name for the paragraph symbol (¶).

The showcase, which was held at Ruang, an event space located at Level 2 of Yayasan SHHB Shopping Complex (Block B), brought together the talents of a musician, a dancer, a visual artist and a writer. 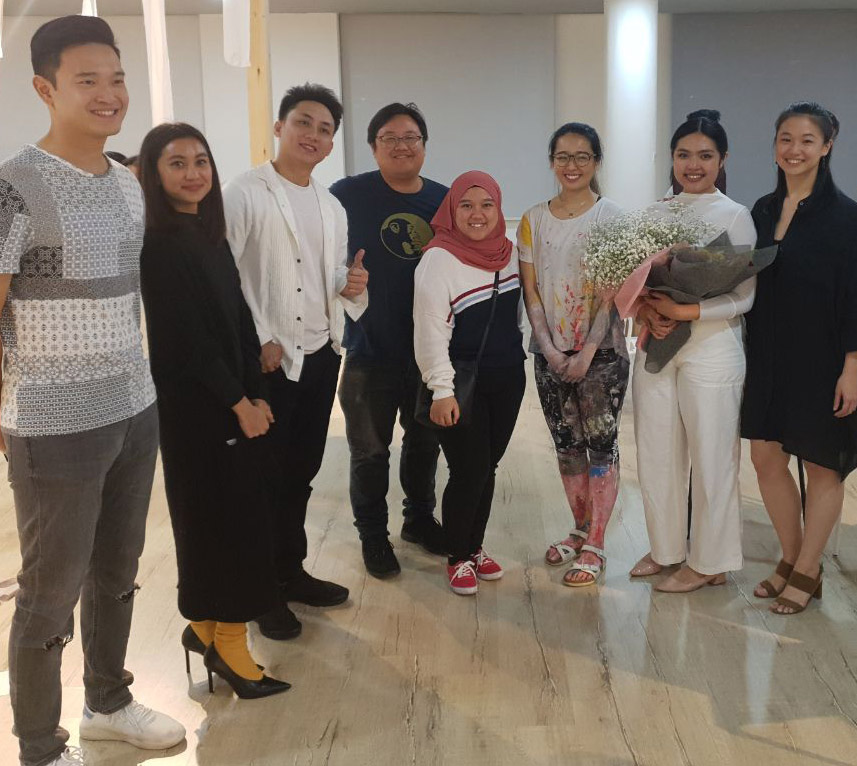 “Check it out! There’s a woman who’s seated alone inside a box that’s wrapped with see-through plastic wrap!” (Check out the main photo at the top of this page!)

This was the very first thing Lance Thoo, the Digital Editor of Neue, brought to my attention as we scouted around for seats.

I later learnt that the woman in the box was Nadiah Suhaili (@nadiahsuhaili). When asked what she would be doing, she said, with a sweet smile, “You’ll just have to wait and see like everybody else.”

I had so many questions in my head. (How long had she been in there? What’s the purpose of this showcase? Why did I let Lance drag me to this?)

But in a way, I’m thankful that Nadiah did not reveal too much.

Why, you ask? Well, let’s just say this event was just one of those things in life where you just have to experience for yourself to truly appreciate (or rather understand) it.

As the lights dimmed, the room was filled with music specially prepared by Ian Chan (@ianchannn), who has been playing the piano since he was 6 years old and is also a self-taught guitar player.

What’s interesting to note is that the other artists – the dancer, the visual artist and the writer – were hearing the music for the very first time.

There were no rehearsals.

Everything that the audience saw that night was shaped (or rather moulded) by the music that was being played.

According to Ian, the purpose of the music pieces was to explore the different facets of emotion through the lens of the ‘Cognitive Theory of Emotion’. It was also to explore the role of culture and environment in shaping how we see the world and how it impacts the way we act.Soon after, our attention was drawn towards Richelle Ann (@riichelle), the editorial director and writer for Hana Zine, an independent publication on the contemporary arts and culture scene in Brunei. As the music was played, the writer typed out her emotions and the audience could see the words projected onto a white sheet. 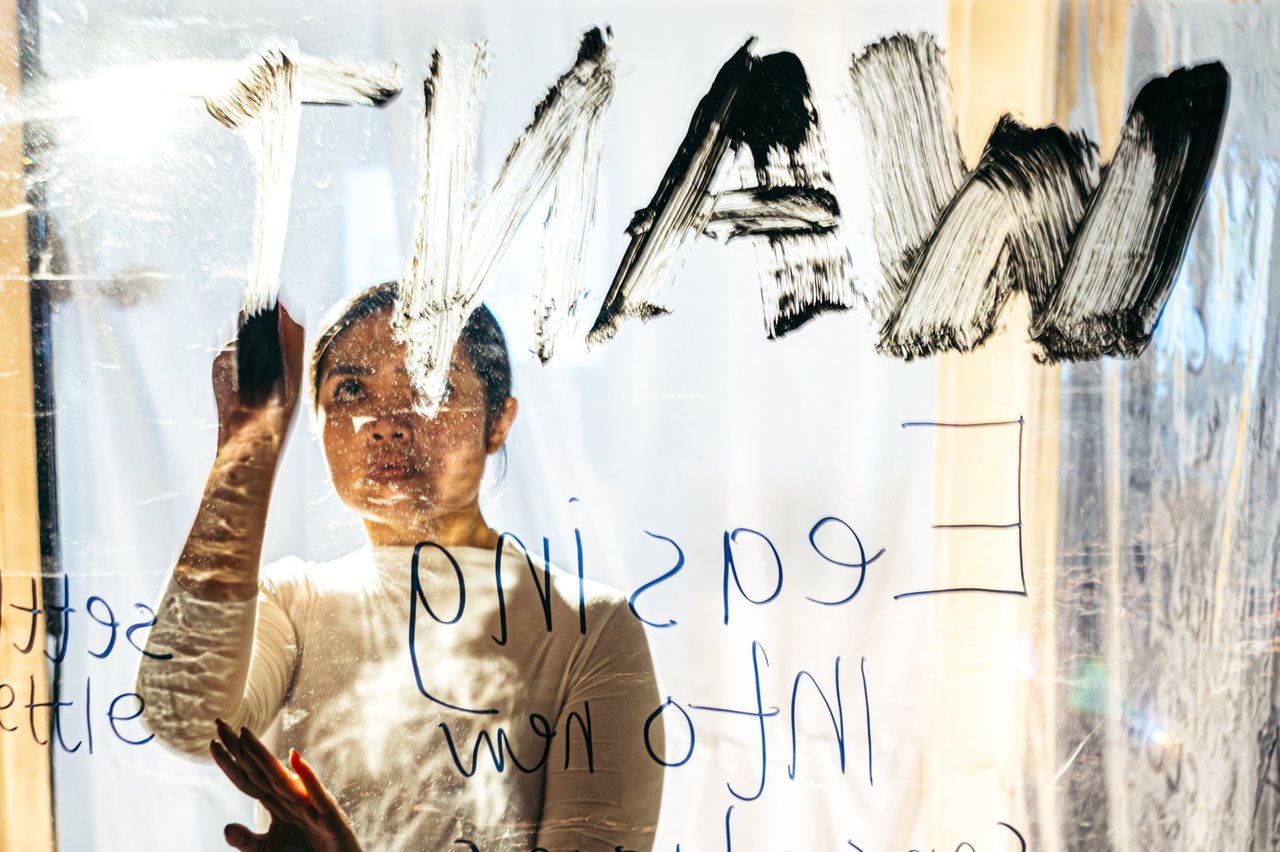 All eyes were then fixed on Nadiah who scooped out paint using her bare hands and began painting around the box.

I occasionally ducked my head as she began splashing paint around. (Thank goodness for those plastic wraps!) 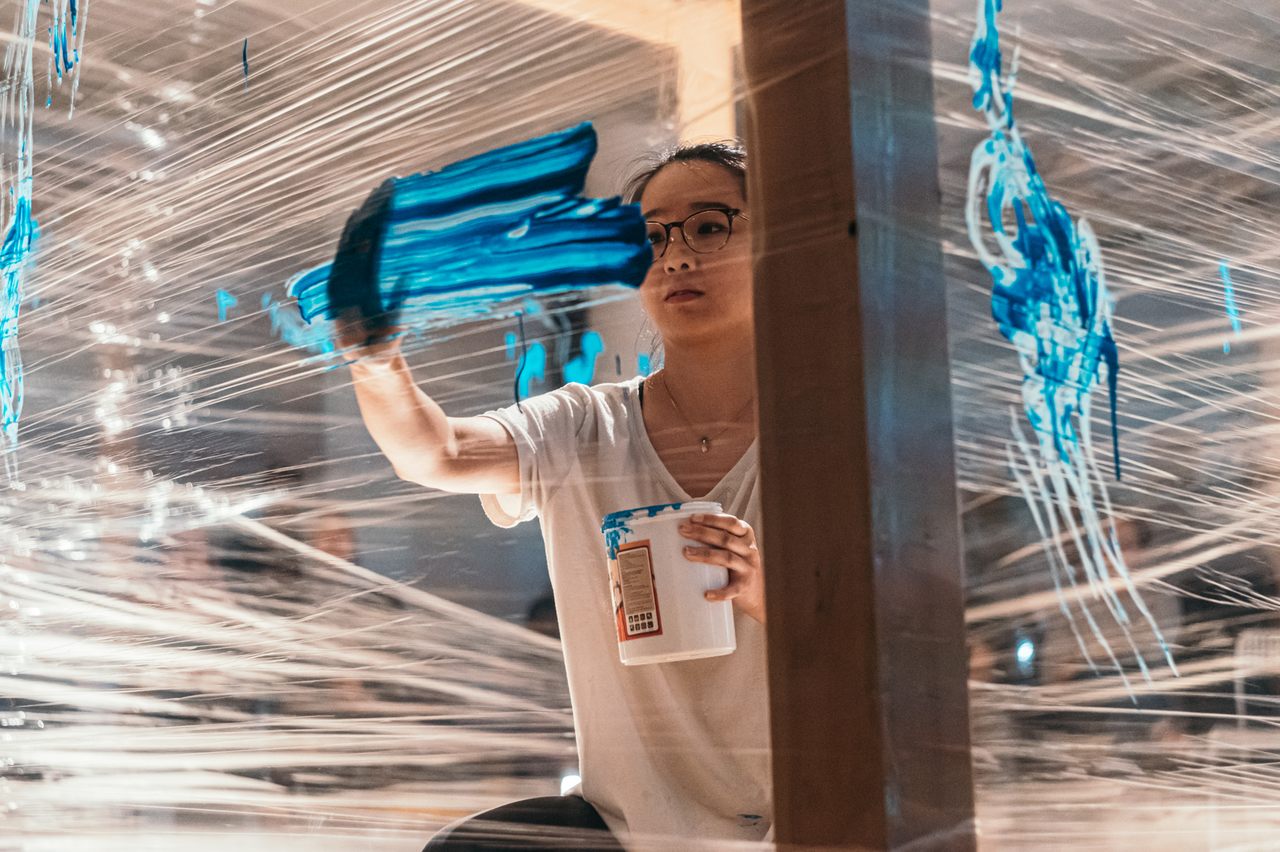 Nadiah, who is also an art therapist, said her performance allowed her to explore “beyond the canvas”, where the goal was to encapsulate the reactions of the audience into the artistic process of painting.

The audience were also mesmerised by an“out-of-body” dance interpretation performed by Lemuel J Capa who was inspired by the elements and environment surrounding him at the time. 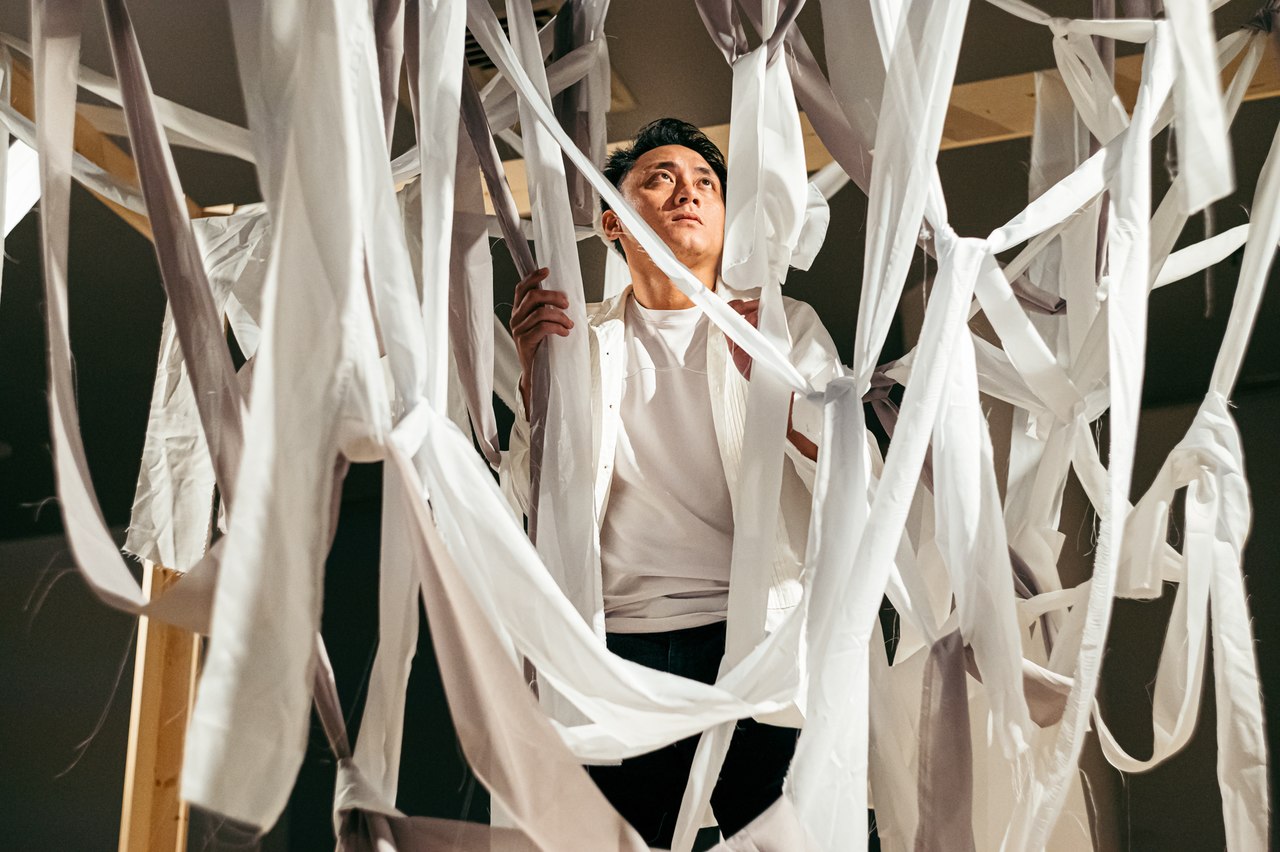 According to Lemuel, who is one of the ballet dance teachers/masters from Studio Eleve Dance Academy (@balletbrunei.eleve), his dance was influenced by external stimulus, where ‘thoughts’ were created (or rather translated) as physical movements.

I’d be lying if I told you that I fully understood what was going on that night.

But one thing is certain … I now have a deeper appreciation for live art as well as the people who put their hearts and souls into their craft. 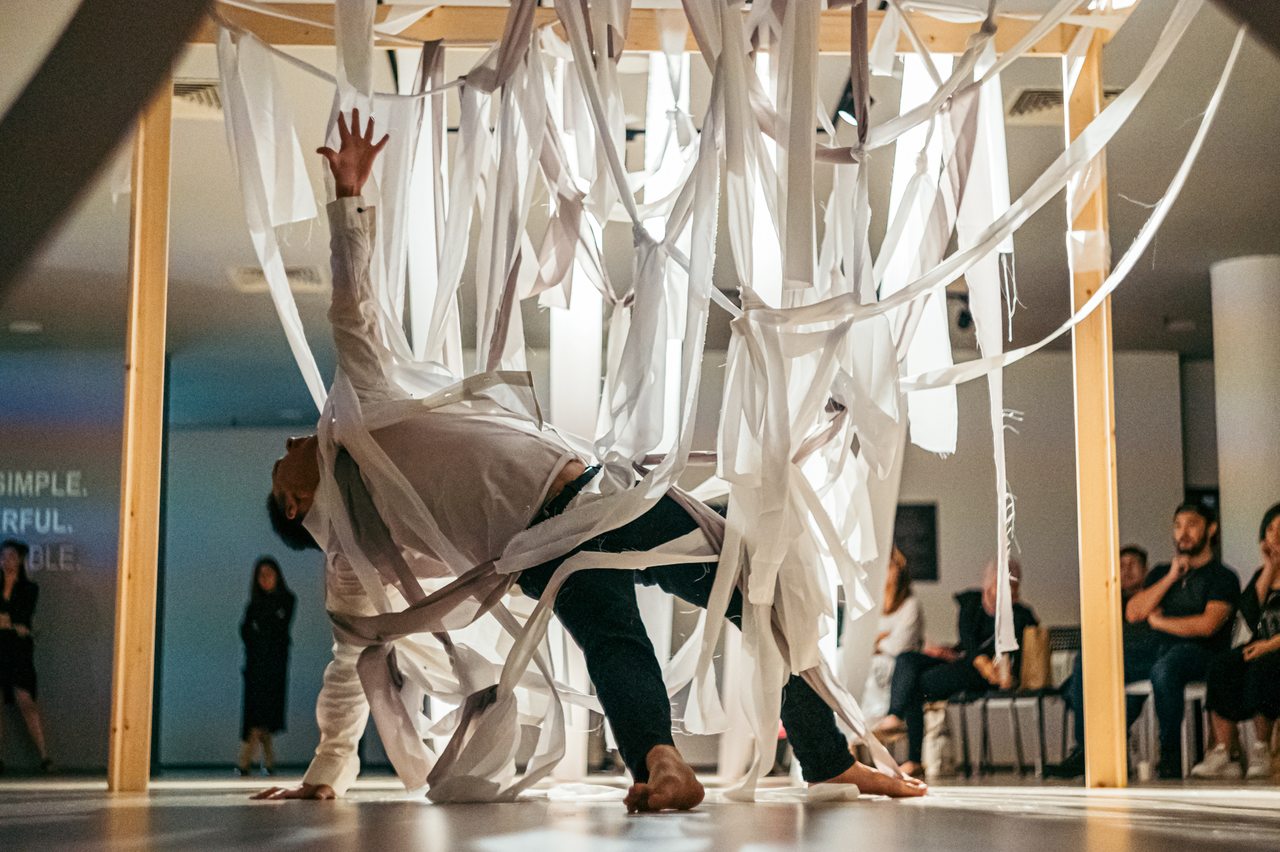 A few weeks have passed since that showcase, and I’m still pondering over this question: “Do we feel because we think? Or do we think because we feel?”

To be honest, I still don’t know.

But I’d love to hear what you have to say about it.

Drop me a line in the comments below or reach out to Neue via Facebook or Instagram.