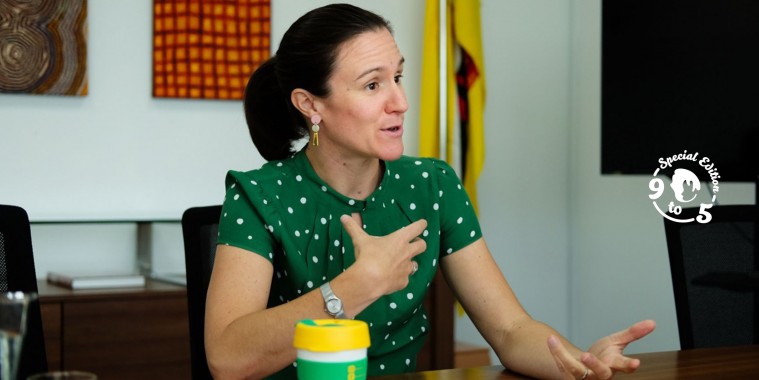 9 To 5: What’s Neue With Nicola Rosenblum

Welcome to a special edition of #Neue9to5. Earlier this week, Neue (@whatsneue) had the pleasure of meeting Her Excellency Nicola Rosenblum, the High Commissioner of Australia to Brunei Darussalam.

In a candid interview, Nicola revealed that she grew up in the state of Victoria in Southeast Australia, not too far from Melbourne. She then went to university in Brisbane in Northeast Australia, and this was where she met her husband.

After she applied and got into the Department of Foreign Affairs and Trade, she moved to Canberra, where a lot of Australia’s government officials are based.

“Brunei is a lot like Canberra – the population is about the same size and they’re both really great places for families,” Nicola said. “In a way, moving from Canberra to Brunei wasn’t that much of a change.”

Without further ado, let’s see how she tackles this week’s #Neue9to5 questions.

1. What’s a typical day like as the High Commissioner of Australia to Brunei?

For me, there is no typical day. That’s what I love about this job. Everyday is completely different. Some days I’ll be doing media interviews, other days I’ll be attending events, hosting functions or holding meetings.

It was about 17 years ago when I first started work at the Department of Foreign Affairs and Trade. I got my first Facebook account during my first posting. I had heard about it from my then ambassador which was kinda “daggy” because he was old!

Look, we’ve come a long way! Back then, governments did not endorse social media at all. And now, it is absolutely part of your daily life. Governments see it as a way to communicate their policies now.

I quite enjoy the social media stuff here.

It’s a way for me to be a bit more myself.

I also get to communicate with a wider variety of people.

But I also get to learn a little bit more about the what’s going on in the country.

I remember when I first arrived in Brunei, someone told me that you need to use Instagram to find out what’s going on.

I had a personal Instagram account but I’d never thought the app would  be used as a news tool. Fast forward to now, I’ll be honest with you … I’d turn to Instagram before checking out traditional news media.

3. What’s something you love doing in Brunei?

Trekking in the jungle is definable one of the highlights of my posting here. The fact that it’s just 10 or 15 minutes away. I’d take the whole family out … it’s so relaxing! You know, you can just be yourself. You can get sweaty and muddy … and it’s lovely! 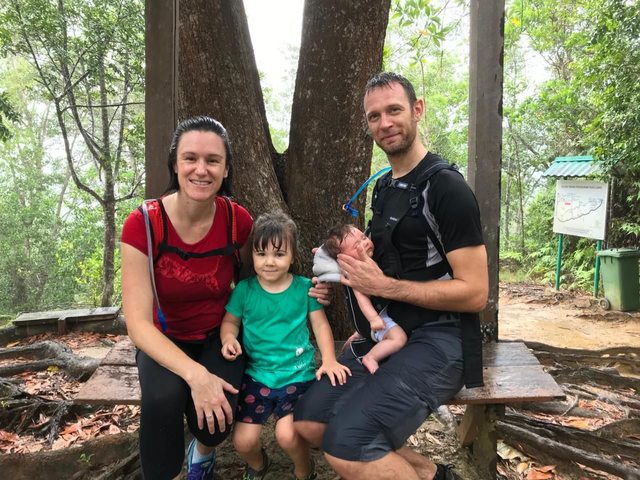 4. What about moments or memories?

I’ve had such amazing opportunities here.

For starters, I had the pleasure of attending the Golden Jubilee celebration of His Majesty the Sultan and Yang Di-Pertuan of Brunei Darussalam.

I was able to row in the diplomatic regatta twice.

I had my second daughter here so she’s a “Brunei baby” so that’s obviously a very important moment for me. I think my daughter has absorbed the “abode of peace” because she’s so happy and chill.

5. We here at Neue are so sorry about the forest fires in Australia. Is there anything us Bruneians can do to provide assistance or aid?

I truly appreciate this question.

Australia has bush fires every year. But this year has been absolutely unprecedented. It’s really been quite tragic.

But what has been amazing is the number of offers of support and condolences and messages of support that have come from the international community.

It’s really been heartwarming! We truly appreciate that.

Australia will recover from this but the scale of it was incredibly tragic and unprecedented. Recovering from this in the short term will be a challenge. But the Australia government is devoting a lot of resources to that. 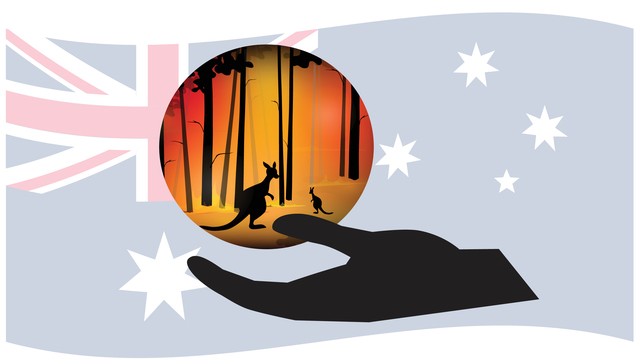 Those interested in providing assistance or aid can do so by checking out the links below:

These are the organisations that are providing relief to the families affected. They are the ones who are giving things like nappies to young mothers and water to people who do not have access to water.

Another organisation that is dedicated to providing assistance to injured wildlife is Wires (www.wires.org.au).

I think climate change is a factor. But I don’t think you can say everything to do with the bushfires is due to climate change. There’s a lot of things we can attribute to other factors at the same time.

I think it’s important for Neue readers to realise that huge amounts of Australia are not affected by bushfires. It is my hope that people will continue to visit Australia.

As for areas that have been affected, it is my hope that tourists will return and support those communities to help them get back on their feet.

It will be the year that Brunei hosts the ASEAN Forum, which I think in the current geo-strategic context, ASEAN has become more and more important.

Brunei will also be hosting the Asean Forum, the East Asia Summit, a forum that will involve the 10 Asean member countries and 8 geo-strategic countries in the region. It will be an incredibly busy and interesting time to be in Brunei.

All eyes will be on Brunei, as leaders from all around the world will be coming to the country, particularly around October and November period.

As far as 2020 in concerned, Australia is focussed on supporting Brunei to get there.

Australia has been partner of ASEAN for more than 45 years.

And it has continued to be a very close friend and ally for ASEAN so with every year and with every chair, we are always looking how we can help the association pact.

8. What would you like to say to all our Neue readers?

Thank you very much to Brunei for welcoming me and my family into your country and into your homes. I hope that you will all have the opportunity to visit Australia for work, or study, or a holiday sometime so that we might return the favour!

9. Furthering your studies: Why is Australia a good option?

The second reason is that Australia is a place of excellence. Australia has universities in the top ranking universities around the world – both standalone for the university as a whole but also at various course levels and disciplines. Australia also has more Nobel laureates by head of population than any country in the world.

And I guess the third reason is because you can really make a difference. The studies in Australia are incredibly practical. They are aimed to make you work-ready. So by the time you finish your studies in Australia, you’ll have the skills you need to go straight into the industry. And they give you the tools to be able to contribute back to your community.

*Editor’s note: I look forward to attending the upcoming Australian Alumni Reception to be held on January 23 in Brunei, as I myself used to study in Perth, Western Australia, in the early 2000s. See you all there!

Calling all ?? alumni! I’m looking forward to welcoming you to my place this Thursday, 23 January. We’ve got a lovely evening planned with yummy food from our alumni friends at @thecollectivewildflower and musical entertainment organised by another Aussie alumna, Deon from @yippytune . Please RSVP by Monday! #australiainbruneidarussalam #australia #brunei #australianalumnibrunei

1. Are you a dog person or cat person?


My family had cats while I was growing up. So I think that’s one reason why I prefer cats.

A few years ago, I adopted a cat from Care and Actions for Strays (CAS), a non-government organisation that promotes responsible pet ownership and addresses issues with stray animals.

“The cat’s name is Nemo and he was adopted in 2017 – that was the year I had my first daughter,” she said. “I really wanted her to grow up with animals.”

When asked why, Nicola revealed to Neue that when she was growing up, she had always wanted to be a vet. “In fact, I wanted to be a big animal vet,” she said with a smile. “My daughter is now one-and-a-half  and she’s super gentle with the cat!”

One of the best holidays I had was when my husband and I went to Corsica, an island in the Mediterranean Sea and one of the 18 regions of France. It is located southeast of the French mainland.

Everyday we’d just get up and go hiking for 6 hours and have a beautiful picnic up a mountain as we take in the scenery.

Come to think of it, my fondest memories will always involve getting out and experiencing nature.

3. What do you miss from your childhood?

Back in the day when there was no Internet, I’d ride my bicycle down the street or watch television. And I’d watch lots of cartoons like He-Man, She-Ra and all those sorts of cartoons.

I’m not sure if you’ve come across the expression – “flat out like a lizard drinking”.

It could either mean you’ve been really busy or not busy.

That’s the funny thing about Australian expressions because they can have two entirely different meanings.

Oh! And while we’re on the subject, what’s another very typical about us Australians is that we shorten all of our words. We sometimes add either an ‘i’ or an ‘o’.

For example, the hospital might be referred to as the ‘hosi’.

And everyone’s names get short.

So what would the shortened form of your name ‘Nicola’ be? It would shortened to either ‘Nic’ or ‘Nico’. And yes, I’ve been called this in my younger years.

5. What’s the most recent film you saw? Who’s your favourite actor?

Coming back on a plane from Brisbane, I saw ‘Godzilla: King of Monsters’. I thought it was going to be awful but it was surprisingly good!

But if I’m being honest, I’m really looking forward to seeing ‘Jumanji 2’ because I am a massive fan of ‘The Rock’ Dwayne Johnson.

I know it’s really silly but I do love the Rock as an actor. At the very beginning, he was in this film where he portrayed ‘The Scorpion King’ in ‘The Mummy’ franchise. He also made this film called “Welcome To The Jungle”. Ever since then, I was convinced that this guy is hilarious!

And while we’re on this subject … Yes, I also do follow Chris Hemsworth who is obviously Australian. He just comes across as someone who’s really hilarious. All the characters he plays are always so funny to watch such as ‘Thor: Ragnarok’ 🙂

Got my first quokka selfie this week at @rottnestislandwa. Epic little creatures are all over the island just cruisin through the day doin their thing. Get there and check it out! #quokkaselfie #wadjemupbidi #rottnestisland @australia

Would you like to be featured in our next interview? Or would you like to nominate any of your friends or family? If so, get in touch with Neue’s Digital Editor via e-mail or WhatsApp.