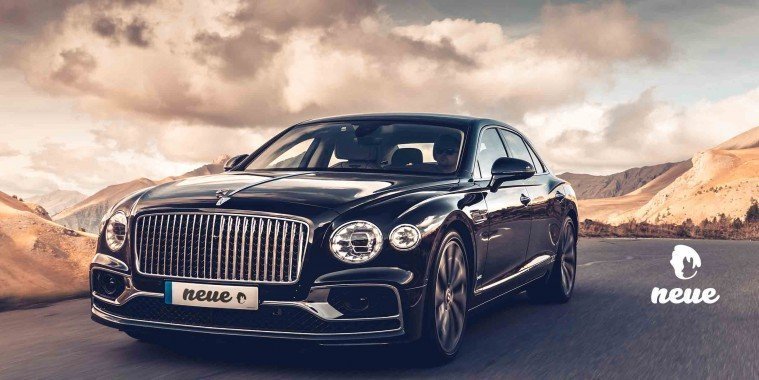 Colossus In A Tuxedo

Bentley is making a -- quite literally -- weighty argument to be regarded as one of the main players in the luxury automotive segment with the new Flying Spur.

The 2.5-tonne luxury liner, which will be available from US$238,000 (about 330,000 Brunei dollars) in early 2020, can make otherwise outstanding saloons like the Mercedes S-Class or BMW 7-series look comparatively common.

Instead, the Flying Spur has its sights on the next level and the Rolls-Royce Ghost. If this needed any confirmation, perhaps the retractable hood ornament on the Spur -- Bentley’s first ever -- is enough. 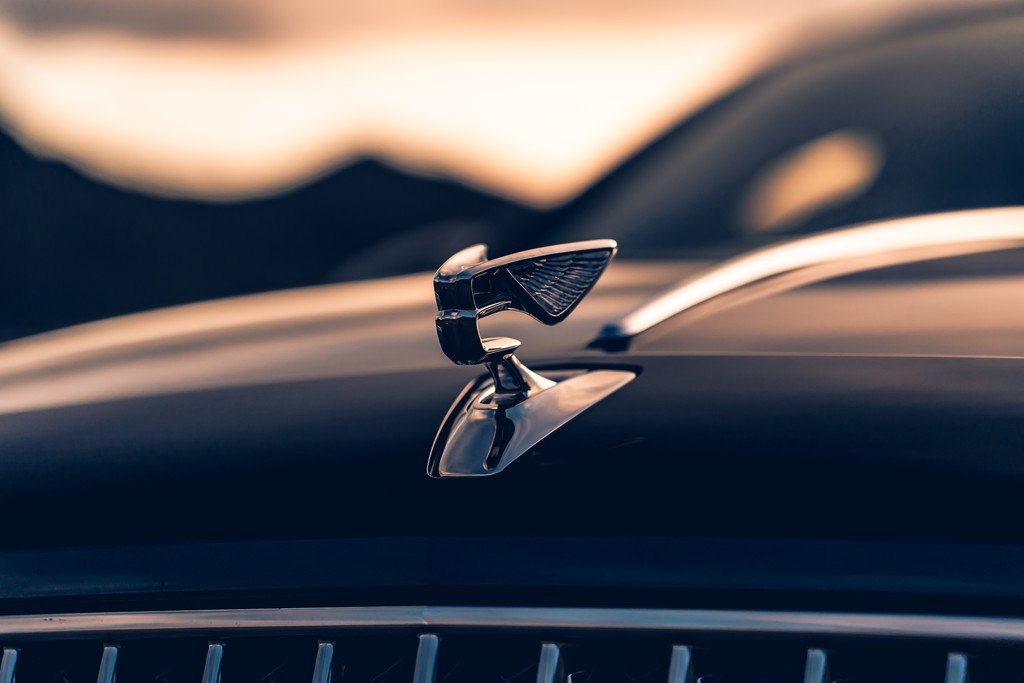 The Flying Spur is the first Bentley with a retractable radiator mascot. (Photos: Bentley Motors/dpa )

Comfort you can see and feel

And that’s not the Bentley’s only eye-catcher: The front grille is huge, while the headlights and rear lights look as if they were cut from crystal.

The luxury liner measures a surprisingly large 5.30 metres and gives its two-door siblings from the Continental family an almost delicate appearance.

The Flying Spur also puts on a show inside with the designers fusing traditional craftsmanship and materials, such as wood and leather, with plenty of tech.

In addition to various digital instruments, the sedan has a huge touchscreen and infrared cameras for the night drive.

While the two-door models were primarily developed with the driver in mind, the engineers had devoted their interest in the four-door model to those in the back seats.

After all, it is usually better to be a passenger in this car than to touch the steering wheel yourself.

That’s why a 3.20-metre wheelbase provides plenty of legroom, and there is unrivalled backseat entertainment with its own tablet computers and a remote control.

Of course, air-conditioned massage seats and a refrigerator are also installed.

Only the lounge chairs with fold-out footrests from the long versions of the Maybach S-Class or the 7 Series have so far not been made available in the Flying Spur. 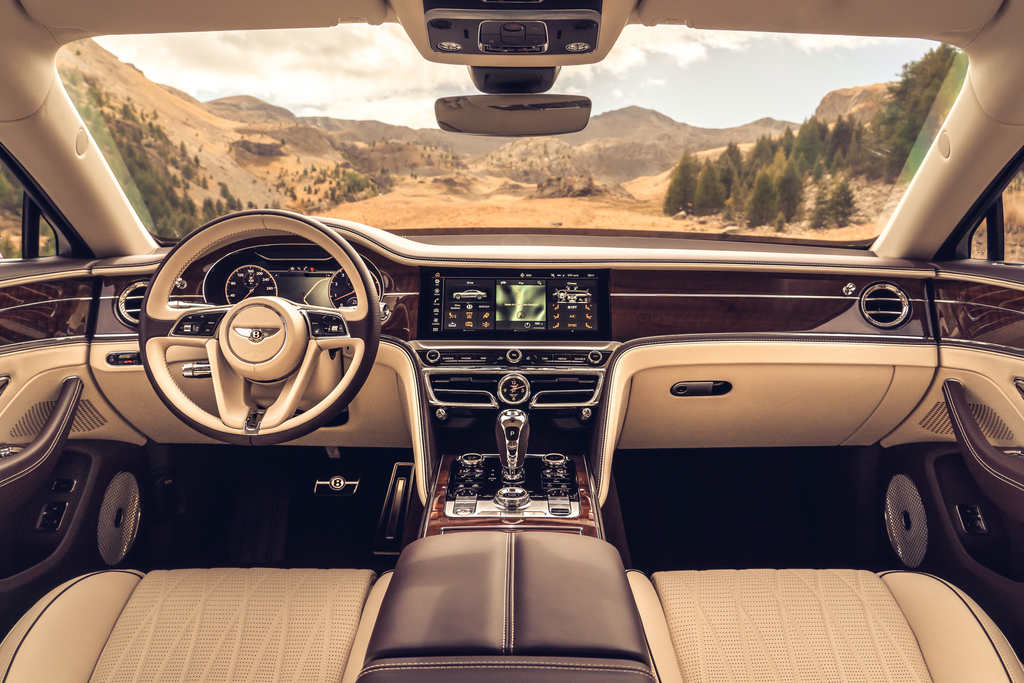 Bentley adheres to tried and tested traditions, particularly in terms of equipment. The Flying Spur also offers a sophisticated ambience of wood and leather.

Also a car for self-drivers

While the Flying Spur is primarily intended for chauffeur-driven use, the sedan has become a car for self-drivers also.

Not only because it is an uplifting feeling to rule over a 12-cylinder engine and challenge the laws of physics with your little toe.

But also because it is almost unbelievable how easily the 635-horsepower and the 900Nm of the 6.0 litre engine accelerate this colossus in a tuxedo to 100 km/h in 3.8 seconds.

Its top speed of 333 km/h makes the Flying Spur confuse itself with a Ferrari for a moment.

However, this feat of strength has its price, and the Flying Spur indulges in a gas-guzzling 14.8 litres (CO2 emissions 337 g/km).

After all, weight and performance take their toll, just like the velvety-silky eight-speed automatic and the all-wheel drive.

It is therefore worthwhile for more economical customers to wait a few months, when versions with a V8 engine and, for the first time, a plug-in hybrid for the climate-conscious super-rich arrives. 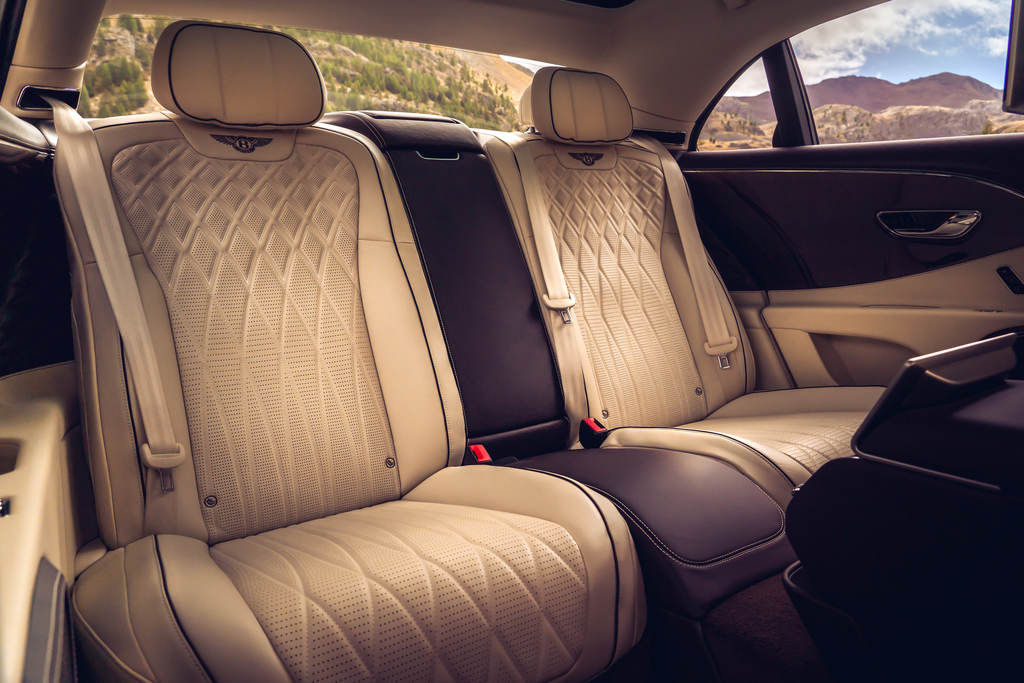 In the rear, massage seats, an entertainment system and a refrigerator provide above-average levels of luxury.

Despite its size, the Bentley is manageable like a mid-size sedan making even gliding over a narrow country road a special experience.

Because the rear wheels also steer and the servomotors on the suspension compensate for all body movements, the elegant giant feels smaller and lighter than it actually is.

And that’s not the only delusion the Bentley has to offer.

When you switch from the universal Bentley mode to “comfort” with the switch on the centre console, your own perception gets even more jumbled.

The engine then seems to be whirring somewhere from afar, and the air suspension is like a cloud. You hardly notice that the mechanics here are testing the limits of car technology.

Packed in cotton wool behind thick insulating glass panes in a luxury lounge, the Flying Spur travels in its own world.

It is faster than any S-Class, 7 Series or A8 -- not to mention the Rolls-Royce Ghost.

With its size, comfort while driving, and all the luxury in the interior, the Bentley is more likely to achieve the status of a grounded private jet than any of its competitors.

While the German luxury sedans are still grounded as a first choice for frequent self-drivers, the Flying Spur is quickly climbing to new heights.

Bentley's Flying Spur is faster than any S-Class, 7 Series or A8 -- not to mention the Rolls-Royce Ghost.⁣ ⁣ With its size, comfort while driving, and all the luxury in the interior, the Bentley is more likely to achieve the status of a grounded private jet than any of its competitors.⁣ ⁣ Click on the link in @whatsneue bio to learn more.⁣ ⁣ #WhatsNeue #NeueWheels #NeueMotoring #Bentley #FlyingSpur #LuxuryCars #Brunei 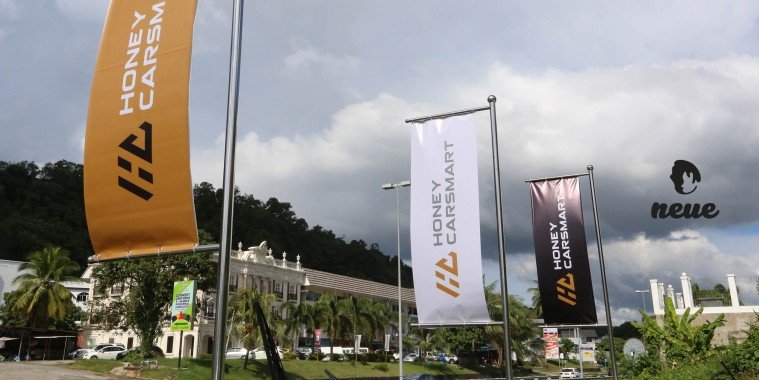