There’s no doubt social media has changed the way we communicate and interact with others. And the spread of the novel coronavirus has resulted in the cancellation of major events, the closing of public spaces and the rise of social distancing.

With more of our interpersonal interactions being pushed online in this time of quarantine, uncertainties loom around the lasting social impacts.

A team of University of Washington psychologists is already studying the impacts of social distancing on adults in King County. The stress that comes from isolation can affect immune-system functions and increase anxiety; human connection is more crucial than ever.

Uncannily, as we look for ways to navigate our new state of social isolation, two of streaming behemoth Netflix’s biggest shows of 2020 have portrayed similar socializing scenarios – and they offer some things for all of us to keep in mind.

After being intrigued by fanfare online, I watched Netflix’s “The Circle” for the first time a month ago. And one of my first thoughts was, “How do these people stay sane while staying inside for so long?”

“The Circle,” an American spinoff of a British series of the same name, debuted on Netflix on Jan. 1 to a steady rise of fans. The competition show isolates contestants within their own rooms in an apartment building, and they can only communicate with others via a computer program that transcribes their messages into text. Because of this streamlined form of communication, some contestants choose to take on fake personas to impress others. The group is periodically asked to rate their fellow contestants, with the top vote-getters becoming the “influencers” of the Circle, thus earning the power to eliminate other contestants.

“The starting point I’d had is: What would a reality show look like where people never met face to face?” Tim Harcourt, “The Circle” showrunner, said in a New York Times interview.

Forced to stay inside for two weeks, cut off from all human contact, contestants are seen passing the time reading, playing with puzzles, cooking and, of course, competing in the complex popularity contest of “The Circle.”

Netflix’s show “The Circle” isolates contestants within their own rooms in an apartment building, and they can only communicate with others via a computer program that transcribes their messages into text. (Photos: Netflix/dpa)

In a recent interview with Vulture, contestant Joey Sasso gave his own advice on quarantine.

Maybe it’s the nature of the competition, but surprisingly, the isolation aspect of “The Circle” is very rarely an issue on the show. You would think the extreme circumstances – no phone calls, no internet access, going days without hearing another person’s voice – would drive these people to the brink of collapse, but they seem to only be blips on the contestants’ radars.

With the oversaturation of social media and other digital forms of connection, maybe humans have found ways to preserve ourselves without being face-to-face with others.

“Love is Blind” is a dating show in which couples meet and get engaged while staying in separate rooms, referred to as “pods,” without seeing or having had any physical contact with each other. After getting engaged, the couples spend three weeks together to plan their wedding, and to see if the connection they built in the “pods” was strong enough to get them toward marriage.

When contestants are removed from the “pods” and forced to spend weeks living together, the pressures of the physical world start to unveil cracks in their relationships.

It’s a given that the short 10-day window couples have to get to know each other before engagement plays a huge part in the success, or lack thereof, of their relationship, but it still raises the question: Can you truly form meaningful relationships with people without bonding in person? 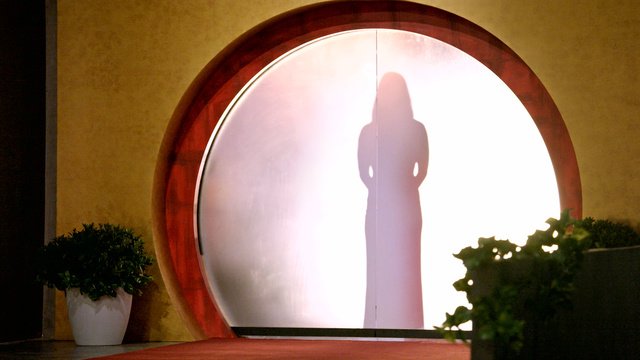 A scene from Netflix’s show “Love Is Blind”.

If “Love is Blind” teaches us anything, it’s that physically being around others is crucial to our relationships. Not for the superficial reasons of knowing what others look like, but for the ways in which we communicate beyond words.

Where “Love Is Blind” differs from “The Circle” is that it looks acutely at how the physical world deeply impacts our relationships. And the abrupt contrast of going from not even knowing what their partners look like to planning a wedding with them illustrates the ways in which being around others changes our social dynamics.

“We’re all watching this play out in real time, but generally what we observe in crisis is that we, as humans, are generally resilient creatures,” said UW graduate student and researcher Adam Kuczynski. “Maybe three weeks ago we considered texting and video-calling to be worse than seeing people in person. But at this time there’s a real possibility in incorporating these things to boost solidarity and connection with others.” (tca/dpa)