The Rise Of Food Delivery Robots

It drives around on its own, like some kind of oversized remote-control car, making its way from restaurant kitchens to hungry customers along city pavements.

The small six-wheeled delivery robot from tech company Starship is currently being trialled in several cities as a way to bring food from shops and restaurants to customers at home. 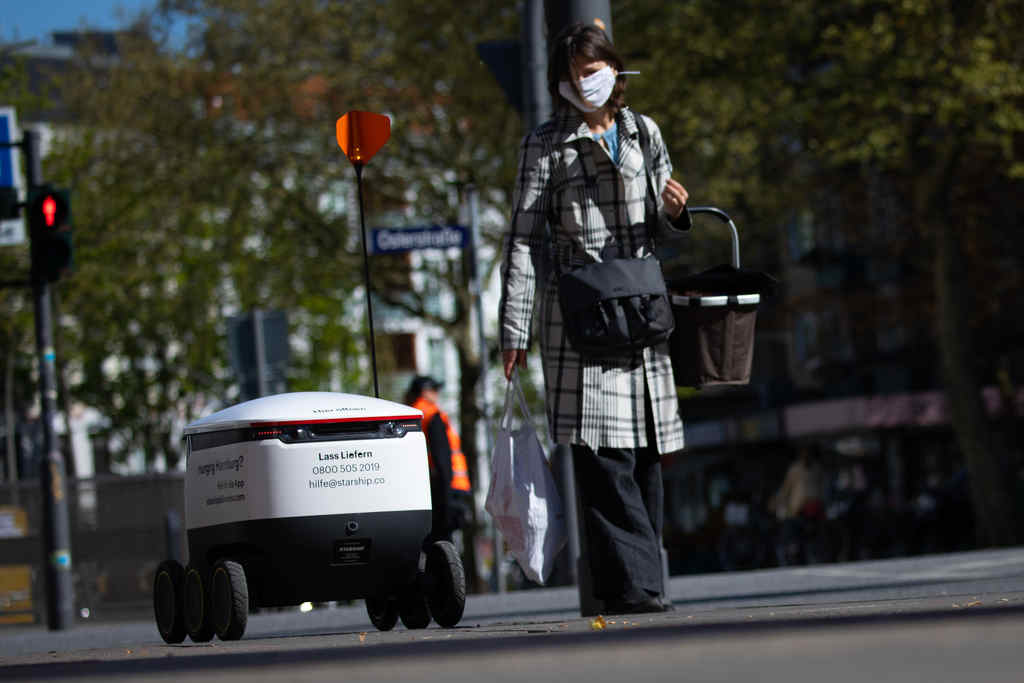 A delivery robot with food drives through the streets of Hamburg on its way from an organic food shop to a customer. The Starship delivery robot, which has sensors, cameras, GPS and radar, brings food from shops and restaurateurs to customers. (Photos: dpa)

There couldn’t be a better time for it to get started, with millions around the world stuck at home under lockdown and being urged to avoid unnecessary contact with the outside world.

Indeed, the first customers in Germany to receive a delivery by this robot this week agreed this is a sensible alternative at a time like this.

“If you’re forced to work from home, this is a great thing,” says customer Leonie Gehrckens, among those to have seen it in action this week in Hamburg.

Roughly the size of a case of drinks, these three-axle vehicles can carry 10 kilos. However it’s only capable of a maximum speed of 6 km/h, meaning that pizza will probably be long cold by the time it reaches the other side of town. 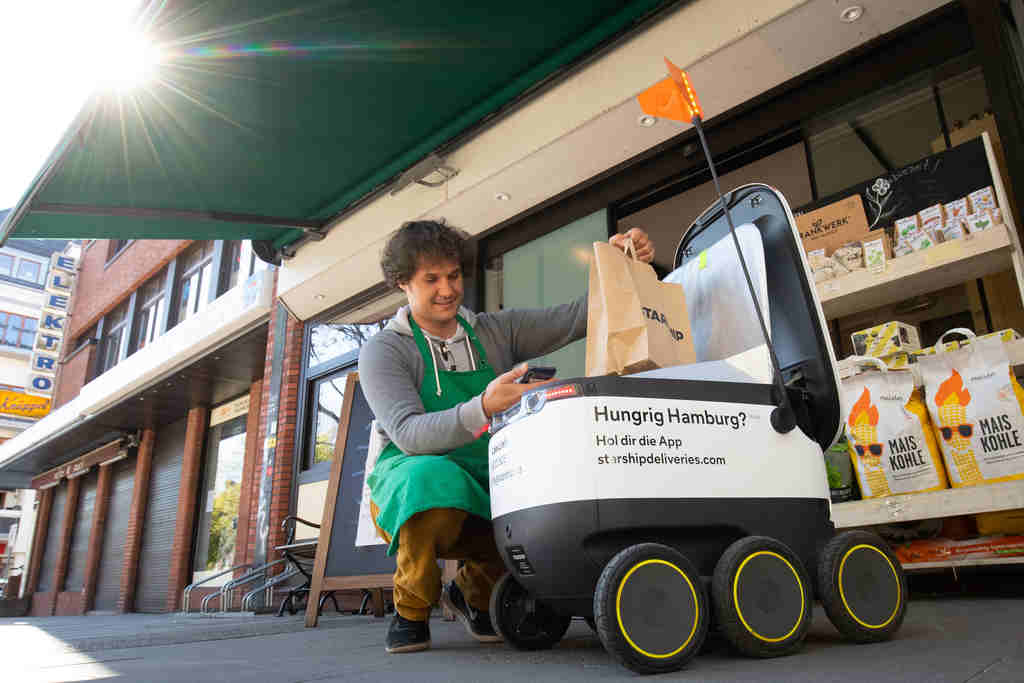 Marc Turjanica, owner of the Hamburg organic food shop Bio.lose, sends the delivery robot loaded with ordered food to the customer with an app. The Starship delivery robot, which has sensors, cameras, GPS and radar, brings food from shop and restaurateurs to customers.

However that’s less of a concern for supermarkets, such as the organic food store ‘Bio.lose’ in Hamburg, among the first to trial the service. Pedestrians also won’t need to watch out for high-speed robots zipping along the path due to its lower speed.

What’s more, the robot is smart enough to detect obstacles in its way. “Our robots are equipped with sensors and cameras, and have GPS and radar on board,” says mission coordinator Jan Werum.

The small robot had already been seen in Hamburg and other cities around the world (not in Brunei yet!) in recent years, however this is the first time the robot is being trusted to handle the journey without being accompanied by a watchdog. 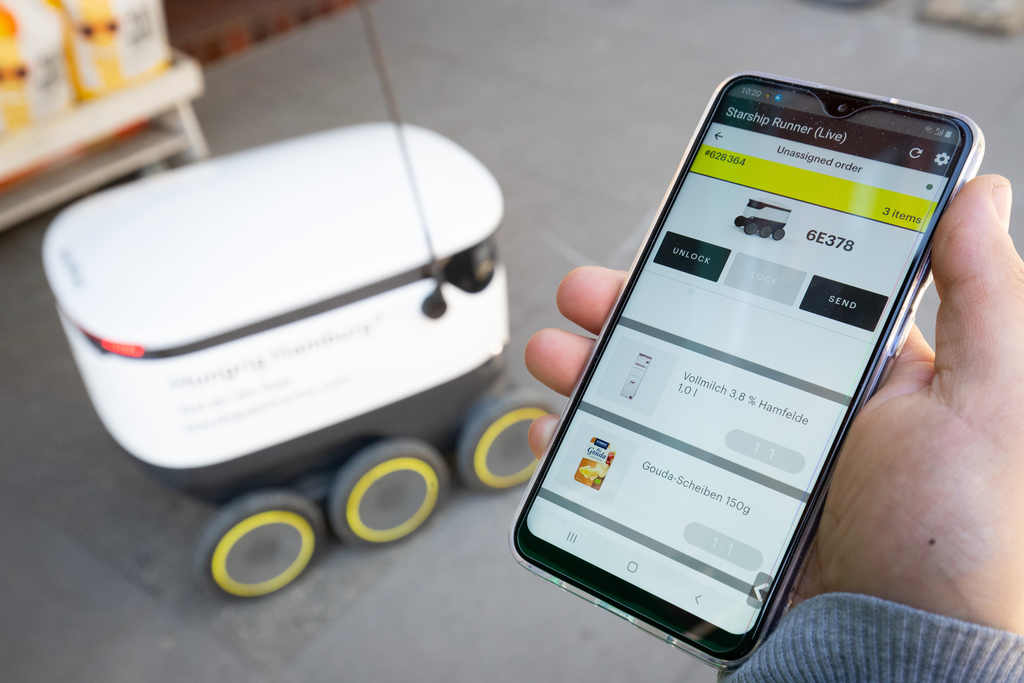 For customers, the process is familiar to food delivery services, in that orders are placed via an app on a mobile phone or tablet and the robot shows up at a given location a short time later.

Anyone worried their delivery might be stolen by hungry thieves can rest assured: The goods are safely locked away in the robot’s cargo area.

What’s more, any thief would be caught on camera and trigger an alarm sound and a notification to central office, where the robot can be controlled remotely.

Whenever we think about German food in Brunei, the first thing that comes to our minds is The German Shop, a humble modest shop located at Simpang 440, Jalan Muara, Sungai Tilong.

Have you checked this place out? 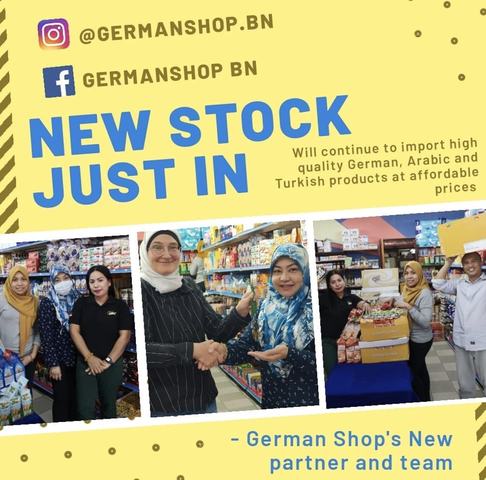 Would you like to promote your goods and services in our next featured article?

If so, get in touch with Neue’s Digital Editor Lance Thoo via e-mail, WhatsApp or drop a DM via Instagram @whatsneue.