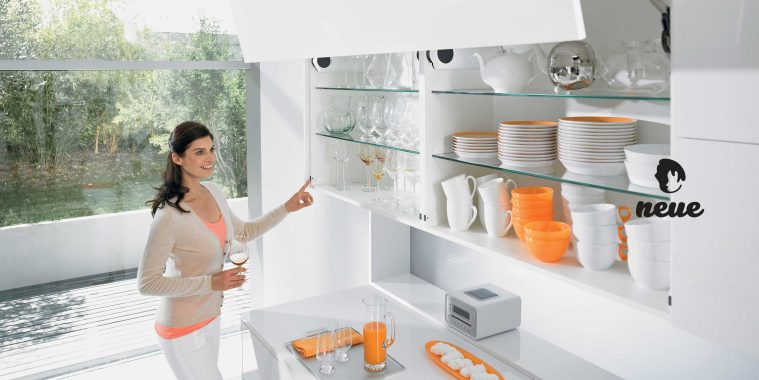 Things To Consider When Planning Your Dream Kitchen

It’s not every day that you buy a new kitchen and so it’s all the more important to get it right. Here are some top tips to make sure you get the kitchen you want.

This isn’t an easy question but it’s quite simple to answer: you see it straight away. Whether it’s a playful country-home style, minimalistic Scandiniavian or industrial chic with metal, concrete and stone surfaces: “The cupboard doors are what you notice first and they shape the whole kitchen,” says Volker Irle from German trade association Die Moderne Kueche (AMK). That means they’re the first thing you should think about.

An open-plan layout, in which kitchen and living area blend into one another, also mean that the design should be consistent, according to Ernst-Martin Schaible from Der Kreis, a buying association specializing in kitchens.

“Modular kitchens are therefore very popular at the moment,” he says. “You can integrate top and bottom cupboards easily into the living space. They are part of the living room furniture, or vice versa.” 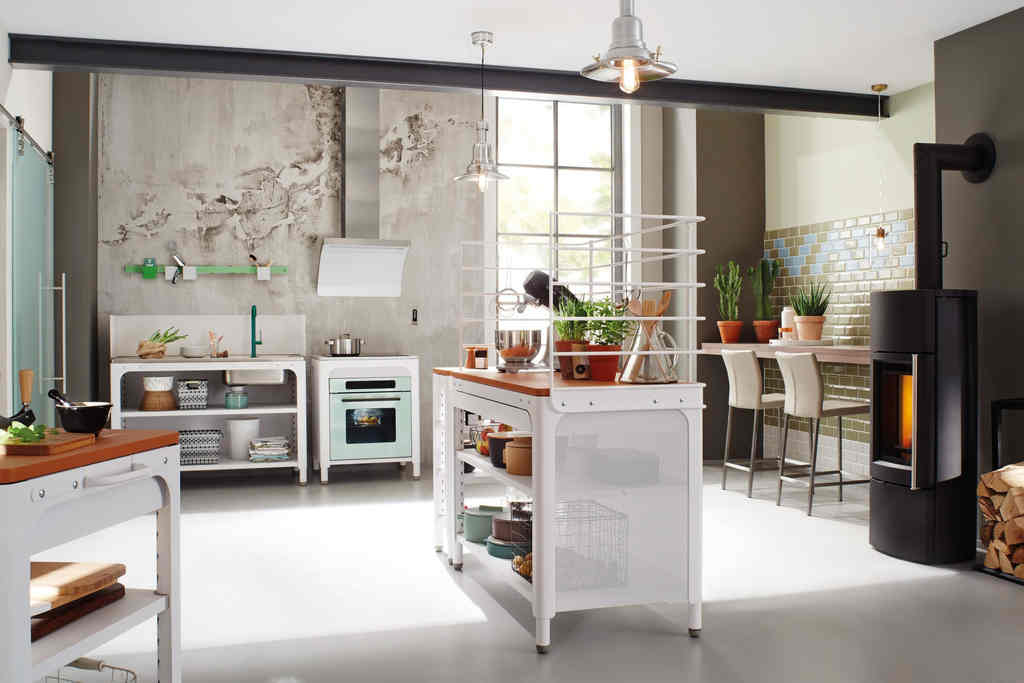 Modular kitchens are currently a big trend. Here, wall units and base units can be flexibly integrated into the living space furnishings. (Photos: AMK/dpa)

2. Kitchen layout: What makes most sense?

Instead of the classic design of having a benchtop along one wall, an L-shaped kitchen is often better in smaller rooms. “It’s a space-saving solution which still offers lots of storage space, for example with a pull-out section in the corner cupboard,” says Irle. 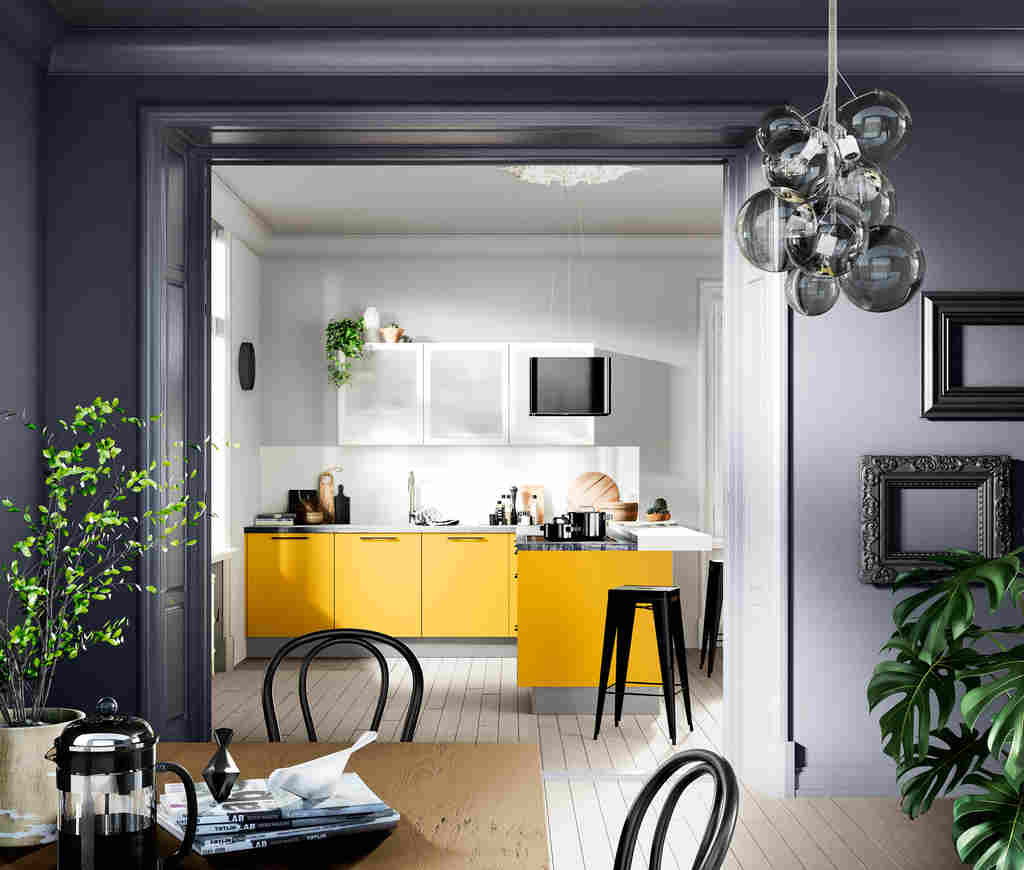 An L-shaped kitchen unit is a space-saving solution that still offers plenty of storage space.

If you want a U-shape the kitchen needs to be at least 10 square metres in total and at least 2.4 metres wide. “That gives you the most work and storage surfaces,” says Irle. For families with 12 square metres of space he recommends a G-shape – a U-shaped kitchen with a counter or eating space in the middle. 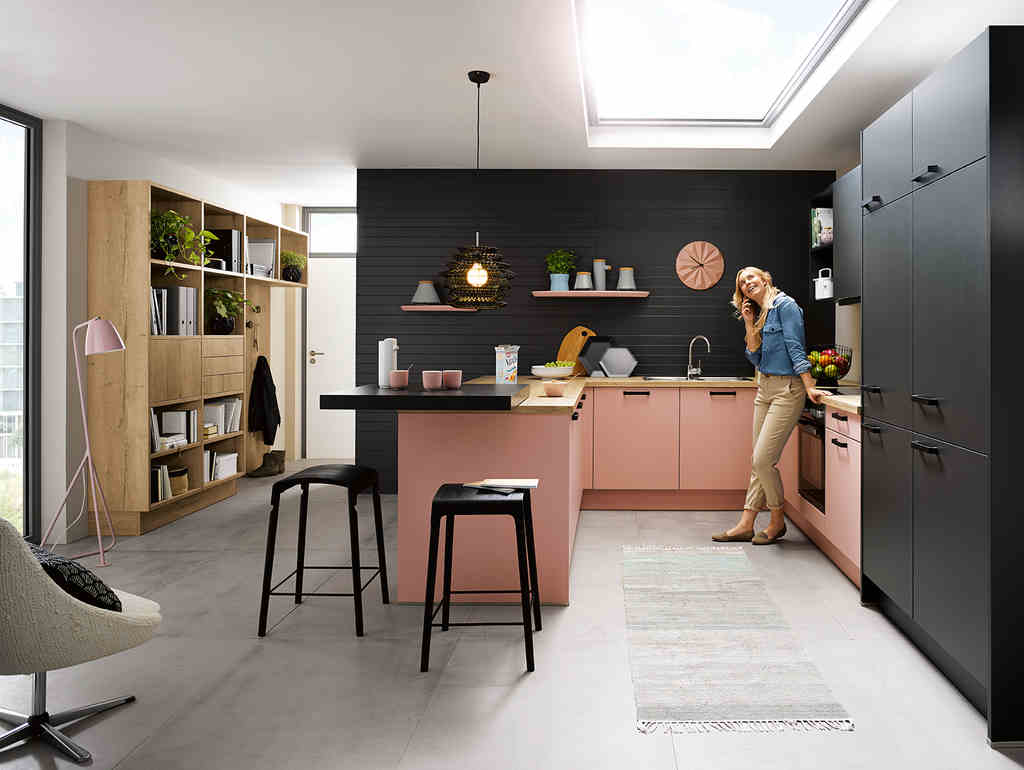 For a U-shaped kitchen interior, the room should have a width of at least 2.40 metres.For even more work space you could add an island. “That’s only doable once you have at least 15 square metres,” says Irle. There has to be at least 120 cm between the island and other cupboards to allow access and let people get past. 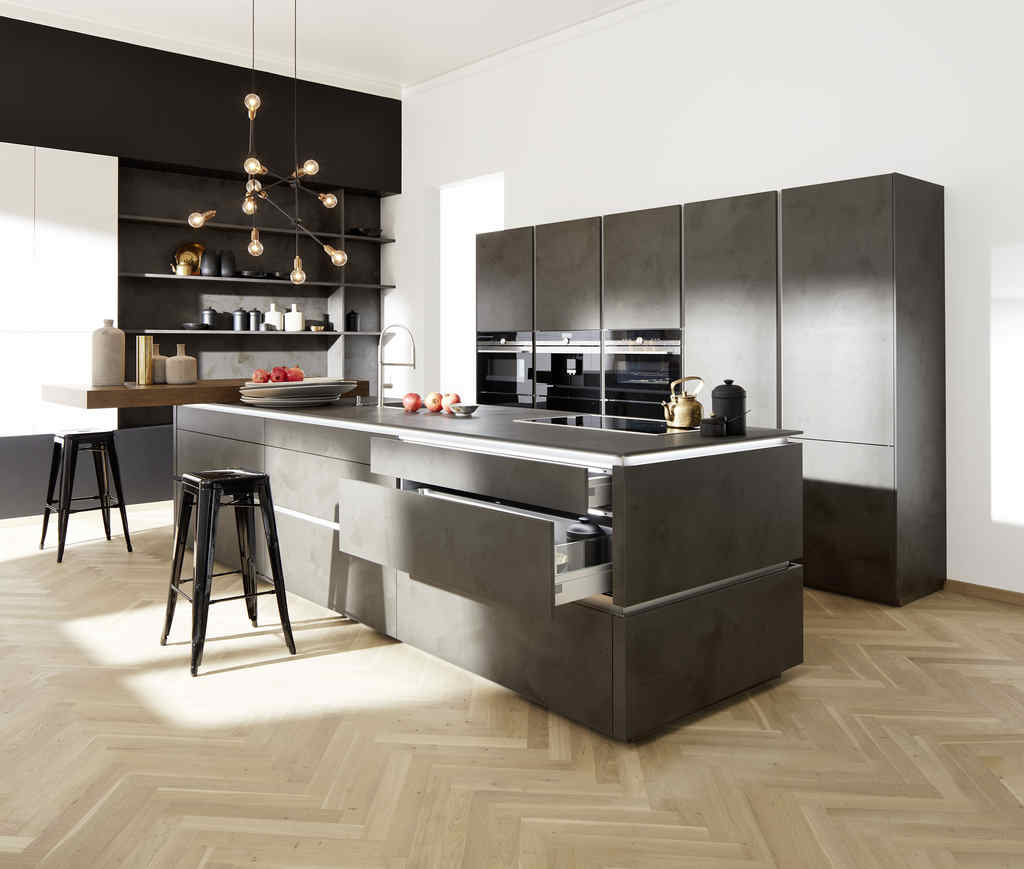 A kitchen with an island is great if several people regularly cook together – provided you have the space.

3. Kitchen zones: What goes where?

Your usual kitchen requirements will decide what cupboards, appliances and crockery goes where. It’s sensible to have the sink next to the area where you prepare food because you’ll be cleaning and washing things then. 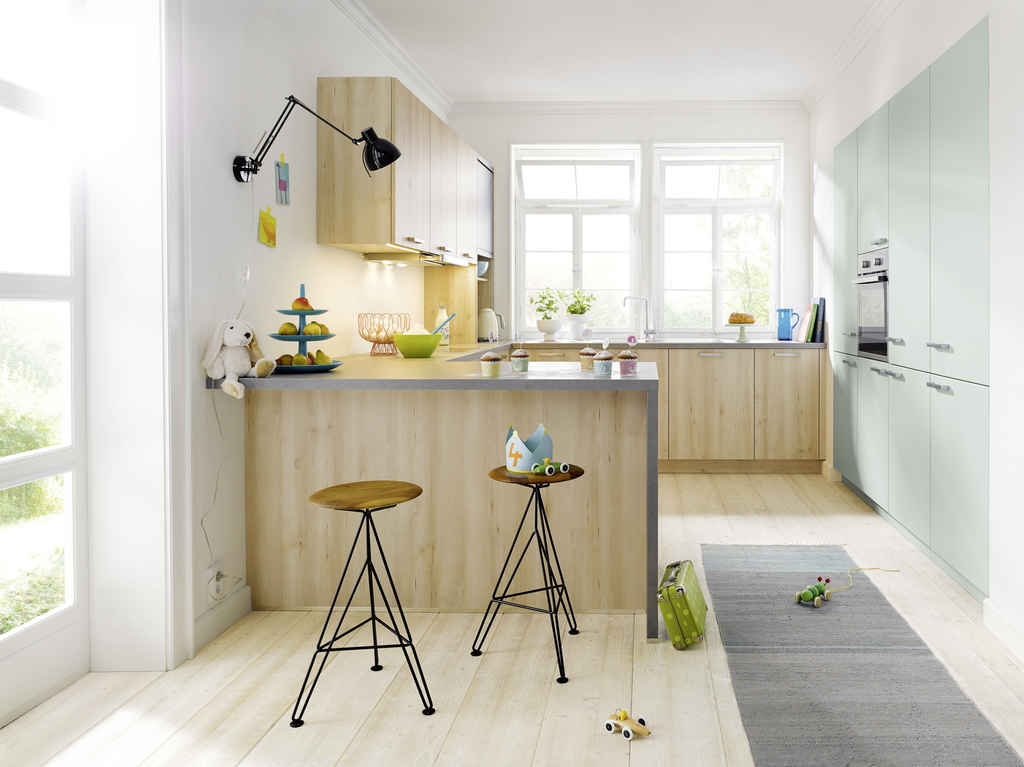 A G-shaped kitchen is a great design for rooms upwards of 12 square metres in size. It’s basically a U-shaped kitchen extended by a small counter or a dining area.

“It’s the main work space. It should be at least 90 cm wide,” advises Irle. Ideally there should be a zone for stovetop and oven next to this area and space for cupboards with pots and pans.

“There should be at least 60 cm between the stove and the sink,” says Schaible. “One the one hand it makes it easier to prepare food, on the other hand because of the distance to water.” He advises against having the stove next to the fridge because the warmth will mean the fridge needs more electricity for cooling.

The opening and shutting of cupboards and drawers using modern mechanics or even electricity has made kitchen work easier. “They [drawers] are easy to open and close no matter how many plates or heavy pots and pans are inside,” says Irle.

Even interior shelves can be made to pull down further, allowing easy access to shorter people or those who have difficulty reaching up. 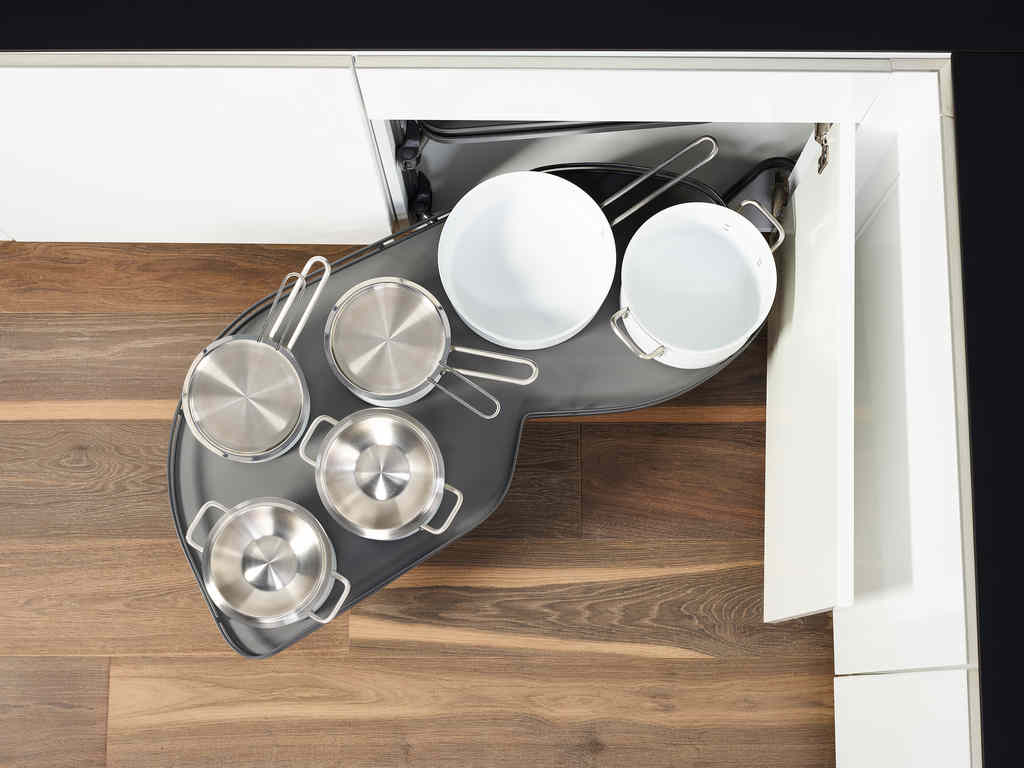 With modern cupboards, storage space in small kitchens can be used much more efficiently.

In order to ease your back, work surfaces, appliances and cupboards should be adapted for their users.

“The work surfaces should be around 10 to 15 cm below the elbow,” according to Irle. “If you’re using high-sided pans it could also make sense to lower the stove top by 10 cm so you can see inside more easily.”

The sink could however be made higher because it’s the bottom that is used as a work surface.

Another tip: Some manufacturers offer electronically adjustable kitchen islands and work surfaces. “A kitchen is also more ergonomic when the oven and washing machine are placed at working height,” says Schaible. That means loading and unloading are much easier. 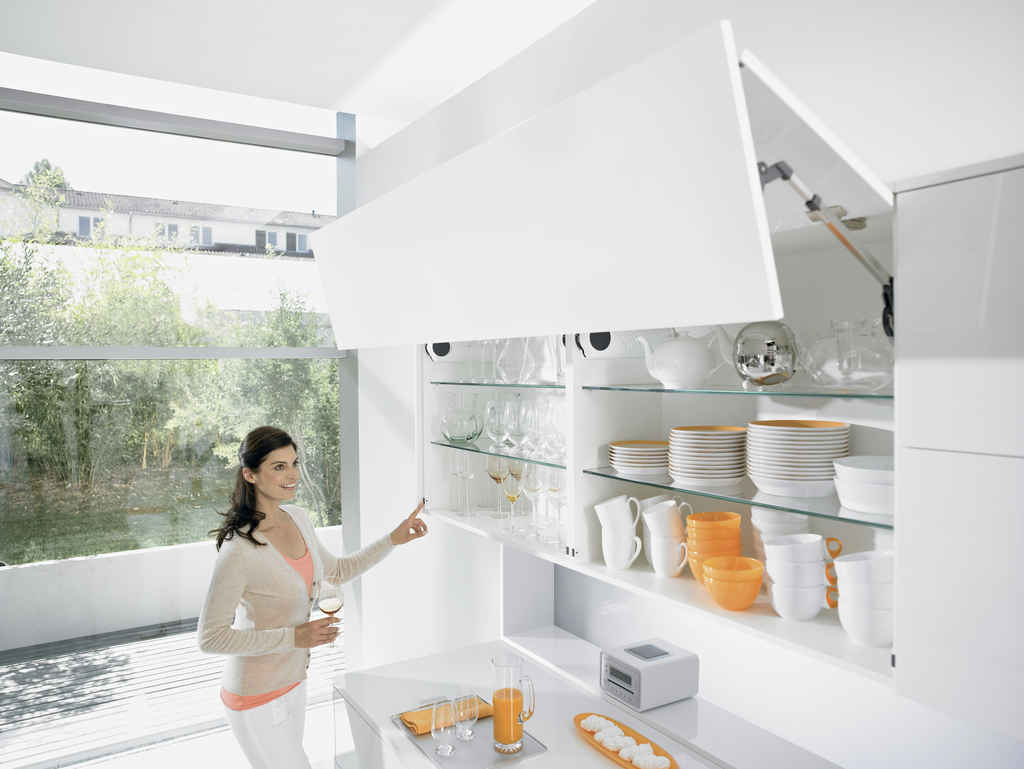 What would your dream kitchen look like? We here at Neue would love to hear from you! We hope that you find these tips useful and if you’re shopping around for a personal loan, click here to learn more about Standard Chartered’s personal financial options. Who knows? You just may well be one step away from making your dream kitchen a reality.