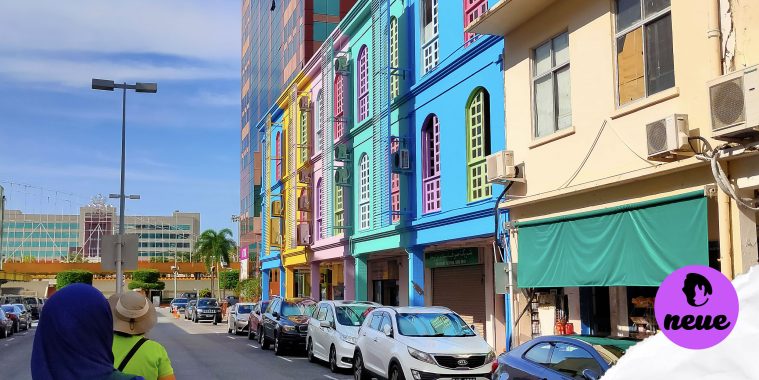 A Walk Through Historical Bandar Brunei

The Brunei we know today is a remnant of a much greater empire that ruled most of Borneo island. To discover its history, there is no where better than the capital itself.

Guided by renowned tour guide and one of Brunei’s top AirBnB hosts, Dk Kemariah (better known as “Kem”), the owner of Kunyit 7 Lodge, a charming homestay in Kampong Ayer, the Neue team ventured out to rediscover the capital. 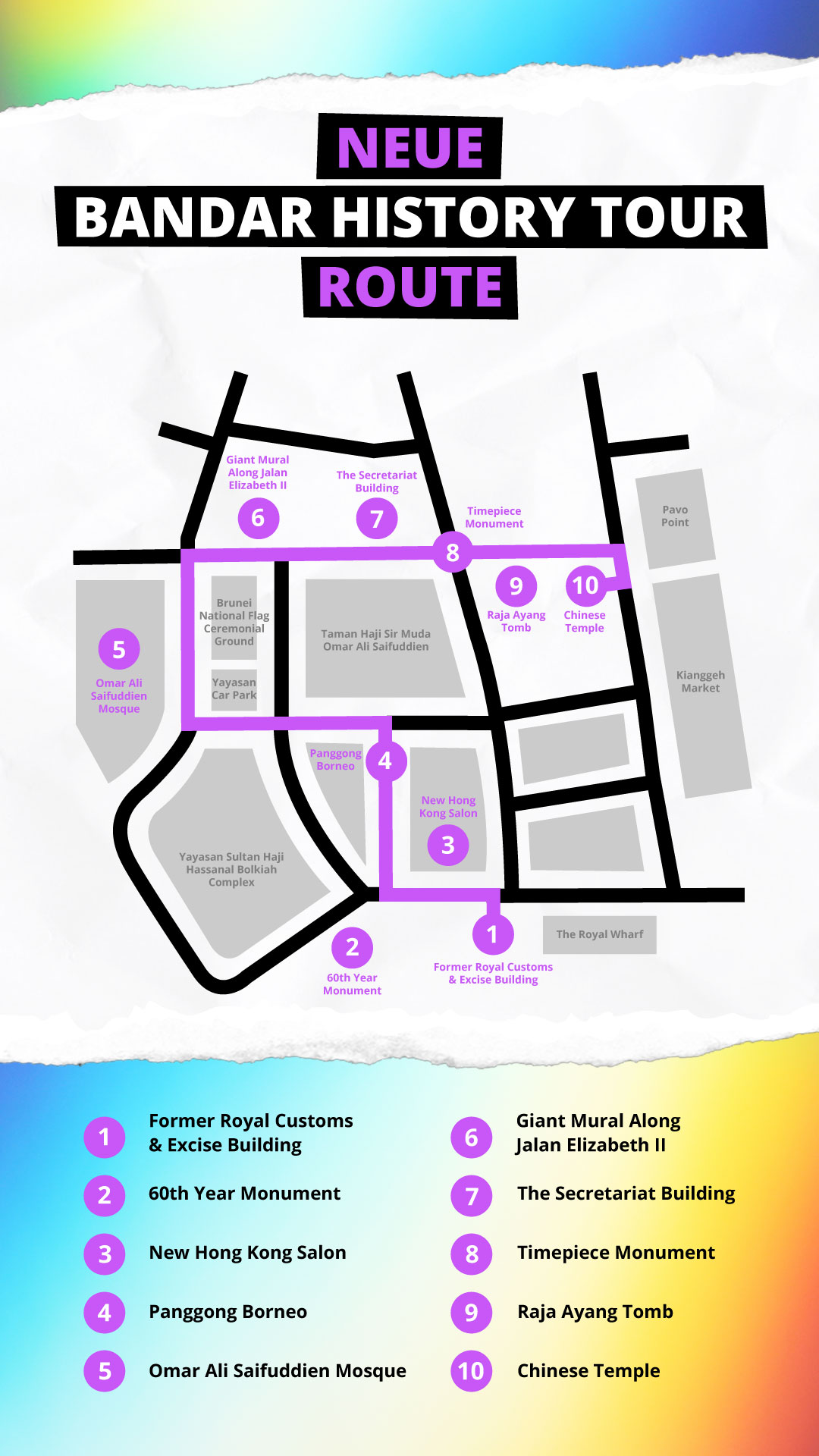 The Former Royal Customs & Excise Building was built in the early 1950s. It served as the control point where people would have to go through before entering the Sultanate to conduct trade.

Kem noted that the area here is regarded as an important spot. “In the past, semua orang naik Haji pakai kapal,” she said, noting that intending pilgrims would be ferried to the holy land for the Haj.

Back in 1951, this area was used by His Majesty Sultan Haji Omar ‘Ali Saifuddien, the 28th Sultan of Brunei, who departed and returned from Makkah when performing the Haj with other pilgrims.

Emotional farewells were a common sight here, as there was always the likelihood that some pilgrims would not survive the entire trip. After all, the journey to the Holy Land by sea could take about three-and-a-half months to six months back then.

These days, the Former Royal Customs & Excise Building is used as an art gallery. (However, it is currently undergoing renovations.) 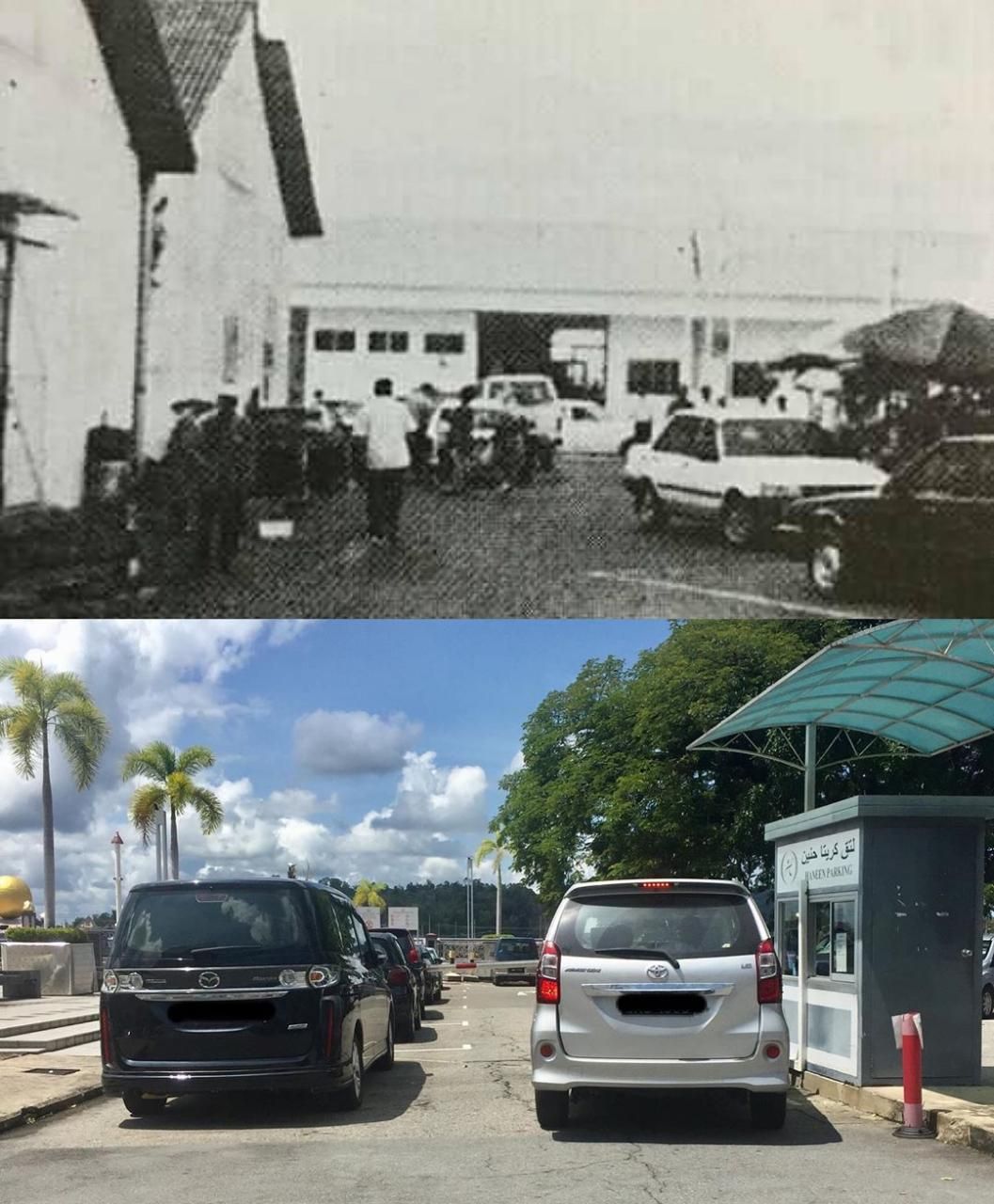 Back then, the building besides the Royal Customs & Excise Building was the State Store.

“In the past, people would say that the State Store was ‘berhantu’ (haunted) because of all the noise,” a Kg Ayer resident joked. “But what they didn’t know was that it was actually because of “tikus” (rats).” 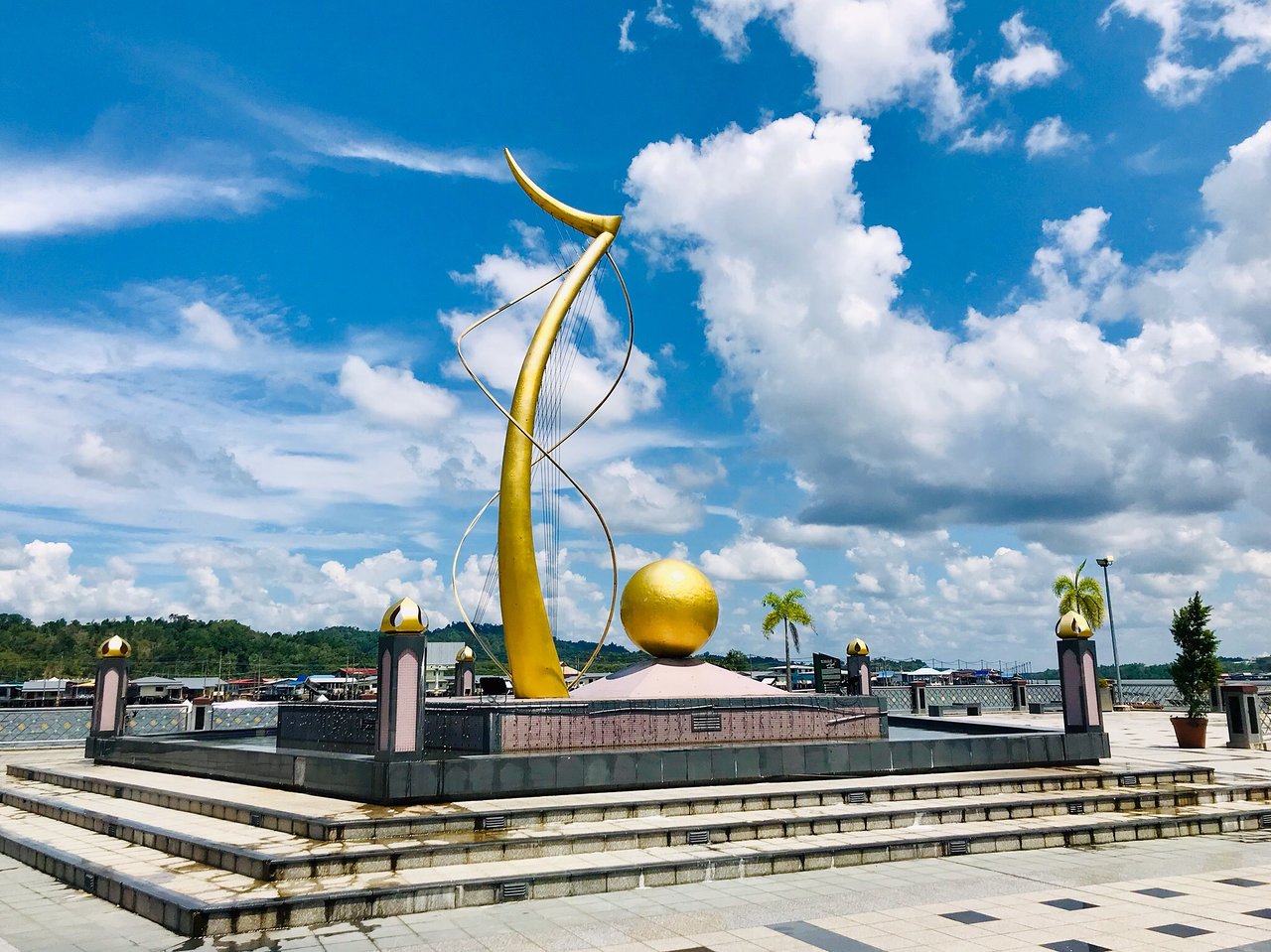 As we approached Mercu Dirgahayu 60 (60th Year Monument), Kem recalls the days when people would have a small fan on top of their dashboard. There was also a fuel station here with just one pump around here.

“Growing up in the water village, all of us would have to park our cars right here somehow or rather,” Kem added. “In the 1970s and 1980s, we would park our cars back-to-back to each other.” 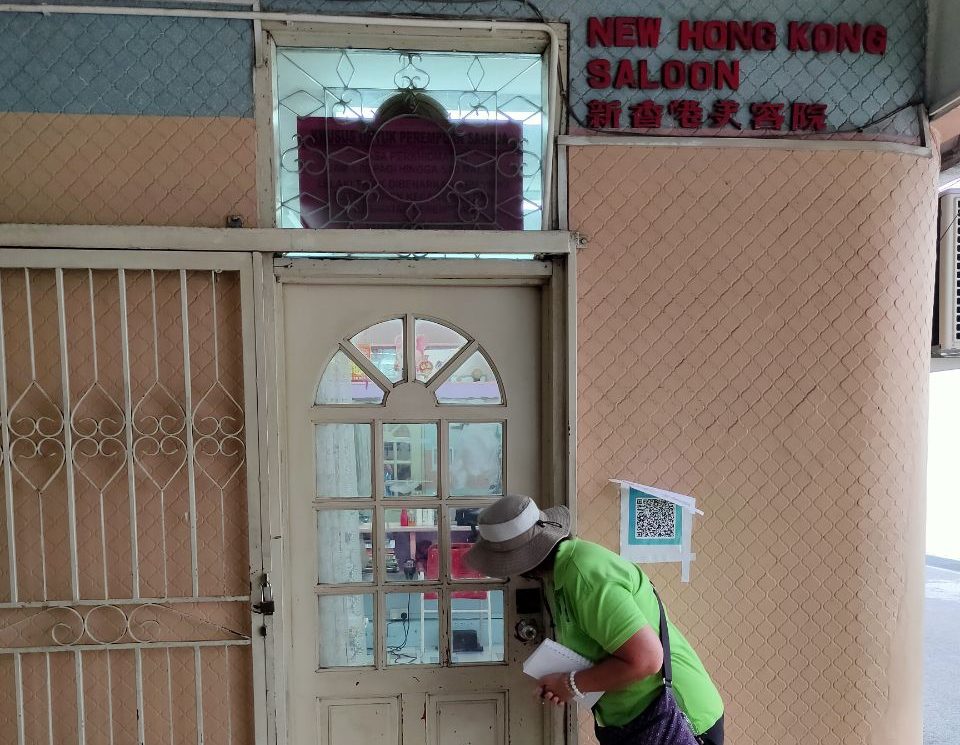 Travel back in time by walking past a salon in the heart of the capital called “New Hong Kong Salon”.

This was a must-visit salon for women back then.

“Back then, if you can’t find my mother chances are you’d be able to spot her there,” Kem said jokingly.

“This salon was one of the most costliest places to pamper yourself,” she said. “People yang berduit (people who have money) would be here during the 1970s.”

How much would a hair-do cost back then? According to her, it would be 15 to 30 dollars for a hair-do. “Back then, that was a lot of money compared to now.”

An elderly woman who was seen inside the salon told Neue that the salon has been around for about 65 years! The owners are believed to have originated from Hong Kong. 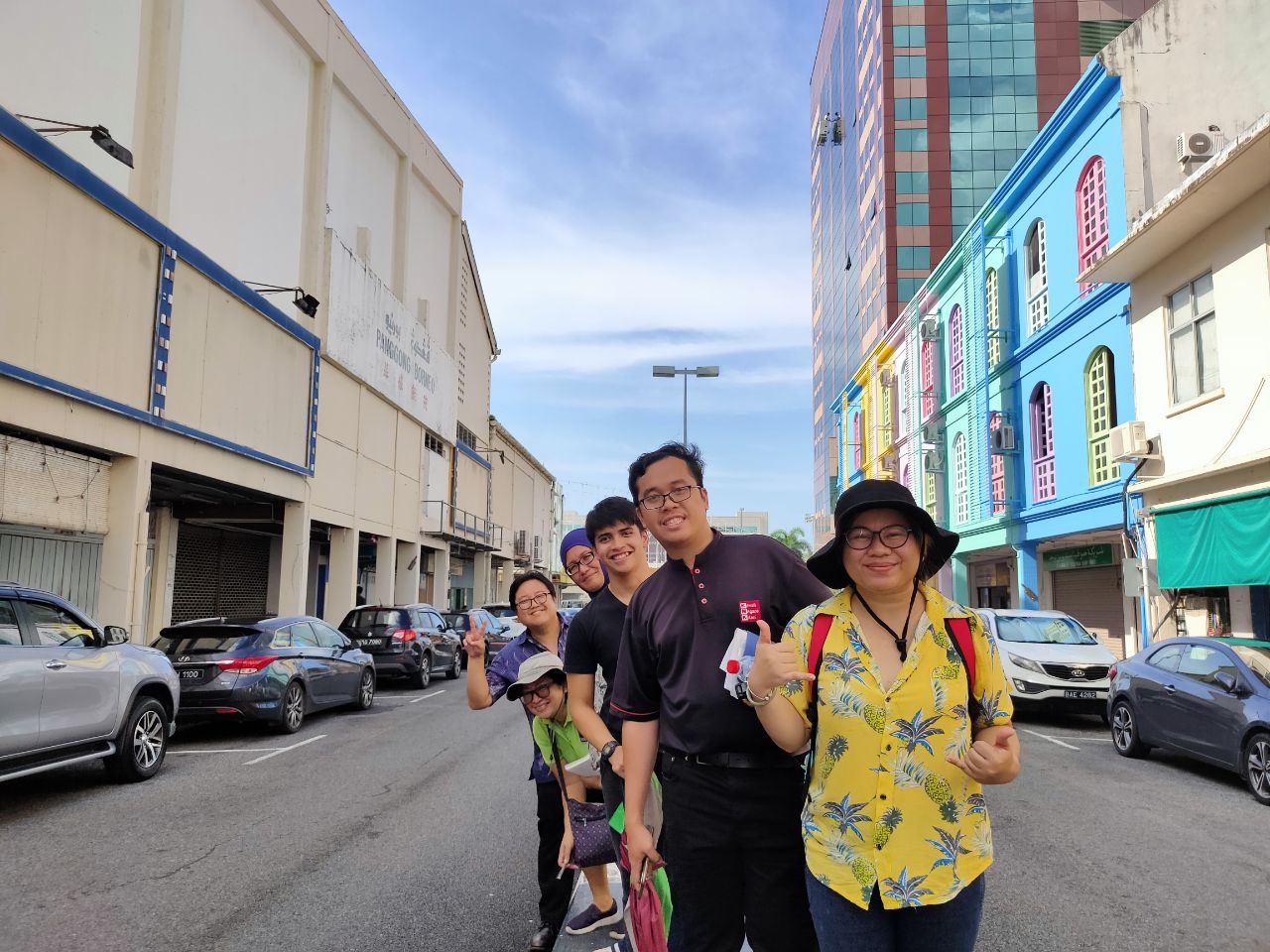 From the New Hong Kong Salon, we then made our way to the now-abandoned “Panggong Borneo” Cinema.

As we walked past the colourful buildings along Jalan Roberts, Kem said: “You’ll notice that some of the roads are named after British Officials / Residence or whoever contributed anything to the local government.”

Recalling her younger days, Kem said this there was also another cinema called “Panggong Boon Pang”, where she had her first “Coke Float”.

“A ‘Coke Float’ would cost about a dollar in the early 1980s,” she said. “But don’t forget back then, a dollar was considered a lot for a schoolkid.”

It’s also interesting to note that a ticket to watch a movie was only 70 cents! (Cheaper than the Coke Float!) 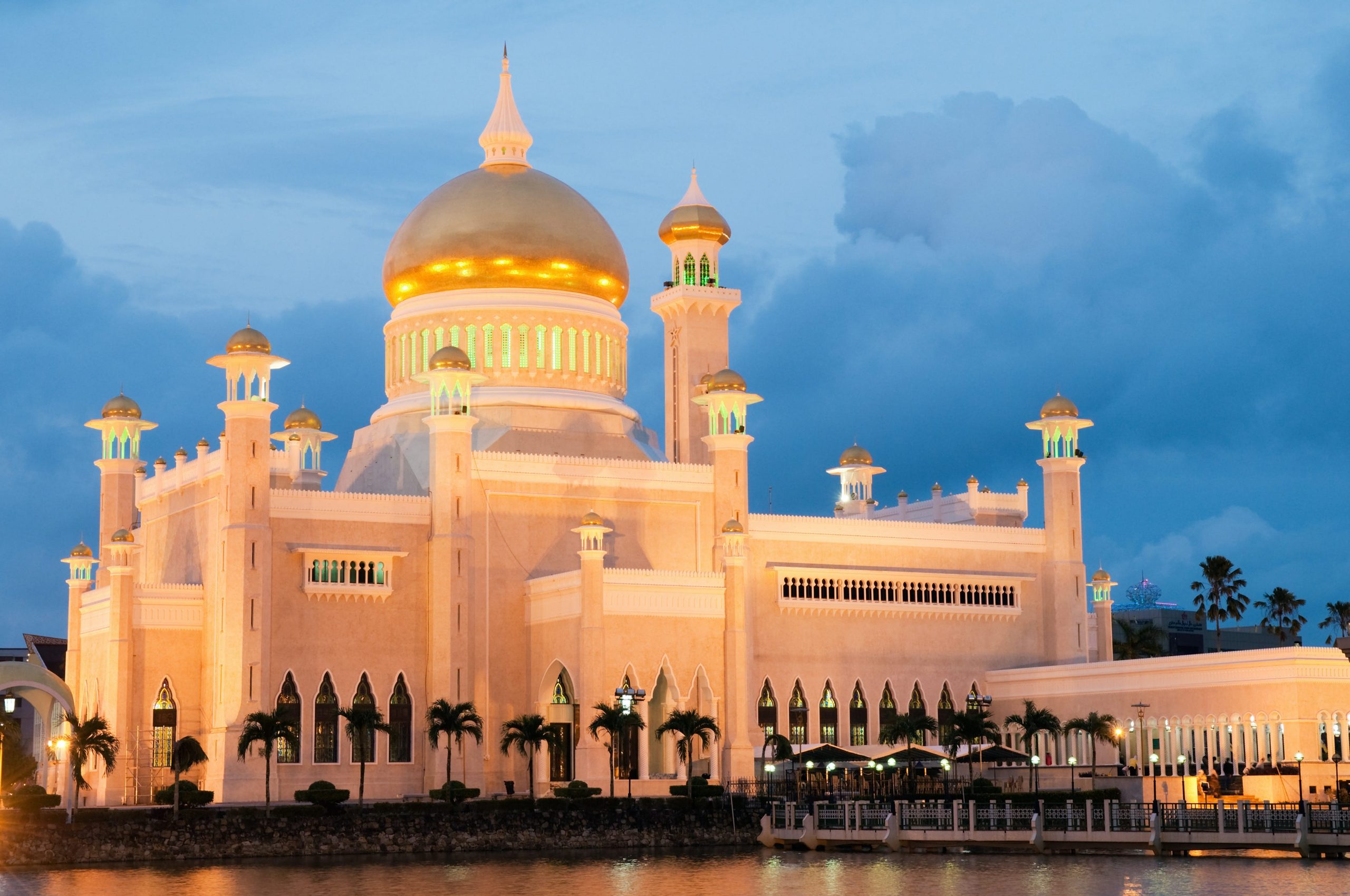 The construction of the iconic Omar Ali Saifuddien Mosque was completed in 1958 to accommodate to a growing population. There were lots of people living in Kampong Year back then, numbering to 30,000. “One time I heard it was close to 60,000,” Kem said.

The Omar Ali Saifuddien Mosque is surrounded by an artificial lagoon that serves as a reflecting pool, mirroring its gleaming golden domes. The interior is almost as lavish as the exterior: the floor and walls are made from the finest Italian marble, the chandeliers were crafted in England and a 3.5-million-piece glass mosaic overlaying real gold leaf covers the main dome.

The mosque is regarded as one of Brunei’s most iconic architectural achievements. 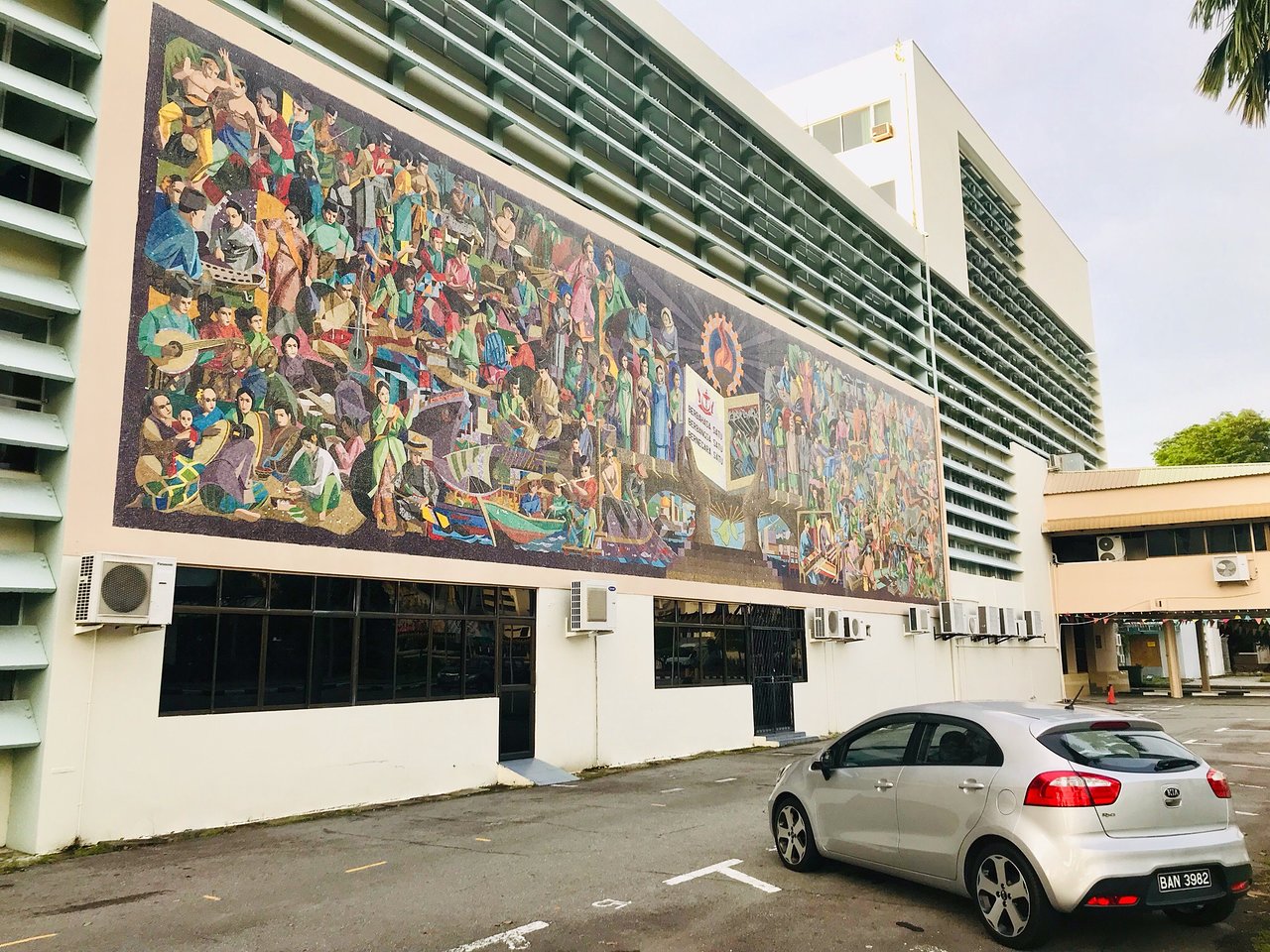 Located near the mosque (across the street) is a 20-by-100-foot mural above the Language and Literature Bureau (DBP). It features more than 100 figures going through social, cultural and economic activities which include songket weaving, fishing, rubber tapping, rice planting and bamboo production.

“The slogan ‘Berbahasa Satu, Berbangsa Satu, Bernegara Satu’ (‘One Language, One Nationality, One Nation’) is the core of the whole portrayal and interpretation of what nationalism and patriotism means. This is a natural born concept in any developing country from all corners of the earth,” said Pg Dato Paduka Hj Asmalee Pg Ahmad during an interview with The Brunei Times back in 2015.

The former director of Radio Televisyen Brunei (RTB) and brains behind the mural said that it was originally designed in 1963. 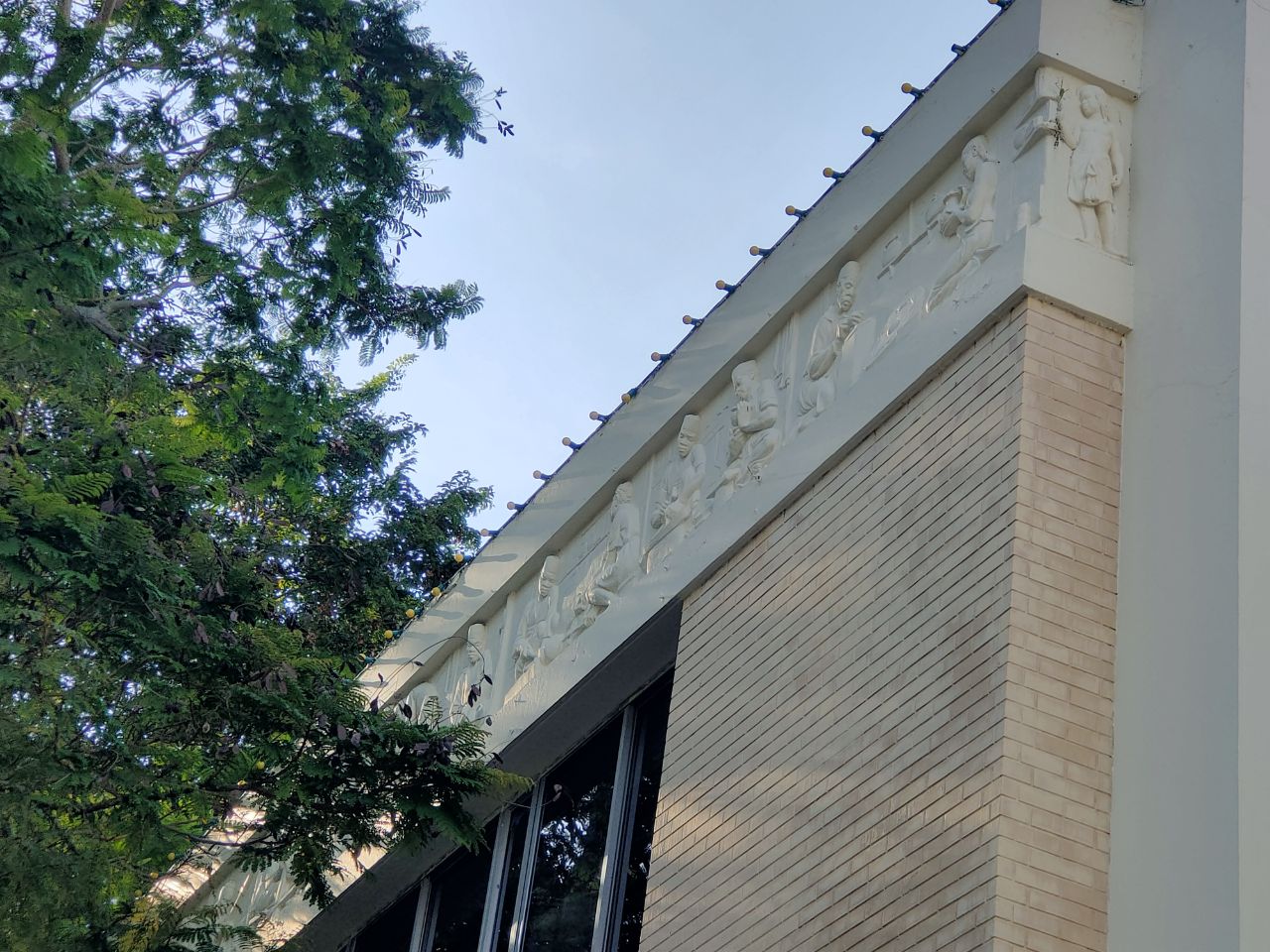 The Secretariat Building is one of the many buildings built during the British colonial times.

It’s a beautiful building built in 1952 as the main seat of the Brunei Government, designed in a Western or colonial style of architecture.

There are some park benches here when you can just sit down and take in the sights and sounds of Bandar Seri Begawan. 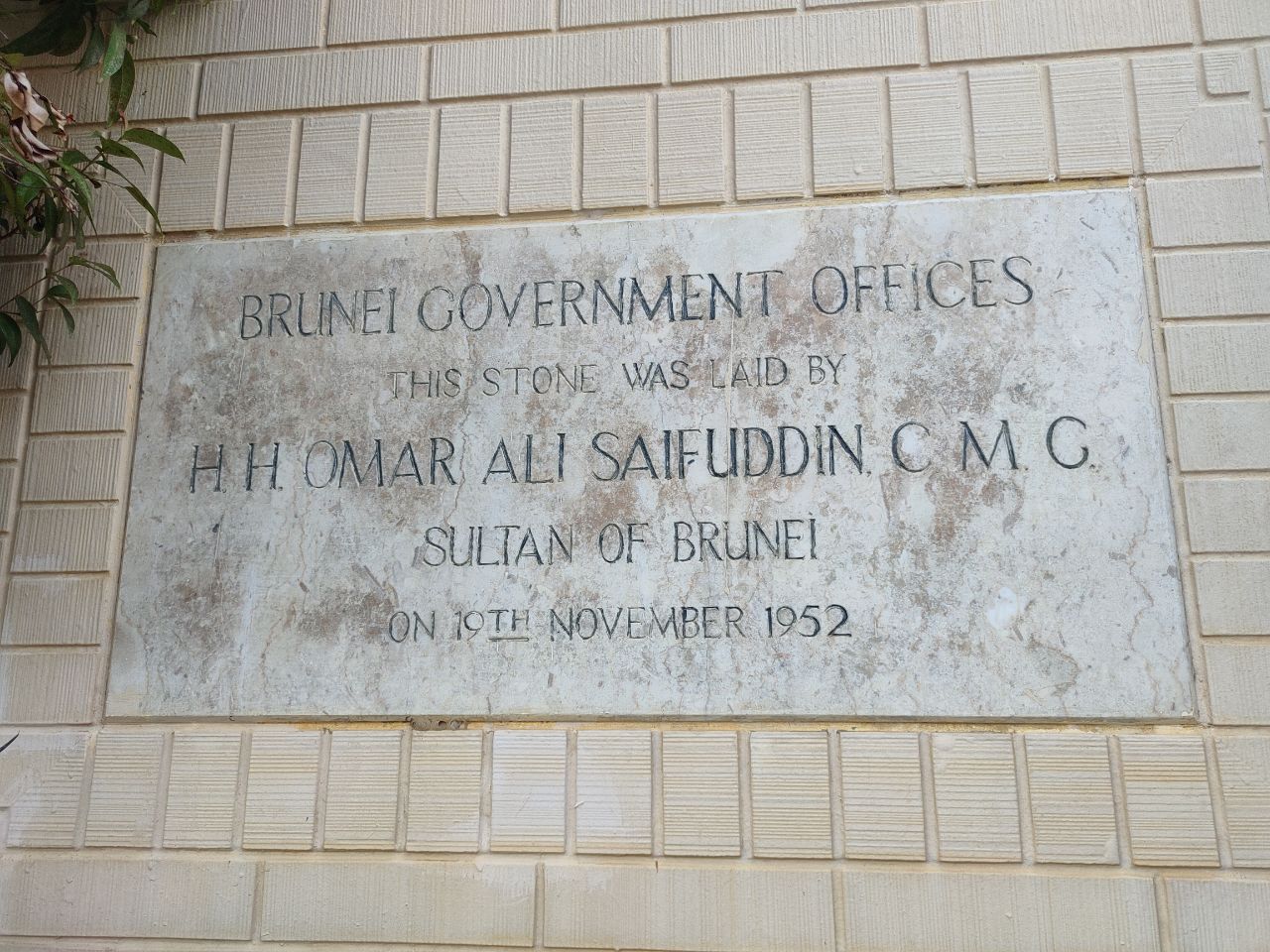 The monument was built on July 11, 1959 in the heart of the capital to commemorate the visit of His Majesty Seri Paduka Baginda Tuanku Abdul Rahman, the Yang Di-Pertuan Agong of Malaysia.

The Timepiece Monument functions as a “Zero-Mile-Clock”. It is used to indicate the starting point of distances between Bandar Seri Begawan and other places in Brunei.

So the next time you see a “KM” milestone at the roadside, the number after KM represents the number of kilometres you are away from this clock! (For example, KM5 = 5 kilometers away from BSB.)

It’s interesting to note that we have a road named after Her Majesty Queen Elizabeth II to commemorate Her Majesty’s visit to Brunei in 1972.

It was not until 1972, that a British Monarch first came to visit Brunei.

To be exact, it was at 9.30am on February 29, 1972 that HMY Britannia berthed alongside the new Muara Port. On the arrival of Queen Elizabeth II, the British High Commissioner welcomed Her Majesty, HRH Duke of Edinburgh and HRH Princess Anne.

The Royal Party then departed by car for Datu Gandi where they board the Royal Barge accompanied by Court Ministers in their decorated boats to continue the journey to the Customs Wharf in Bandar Seri Begawan. 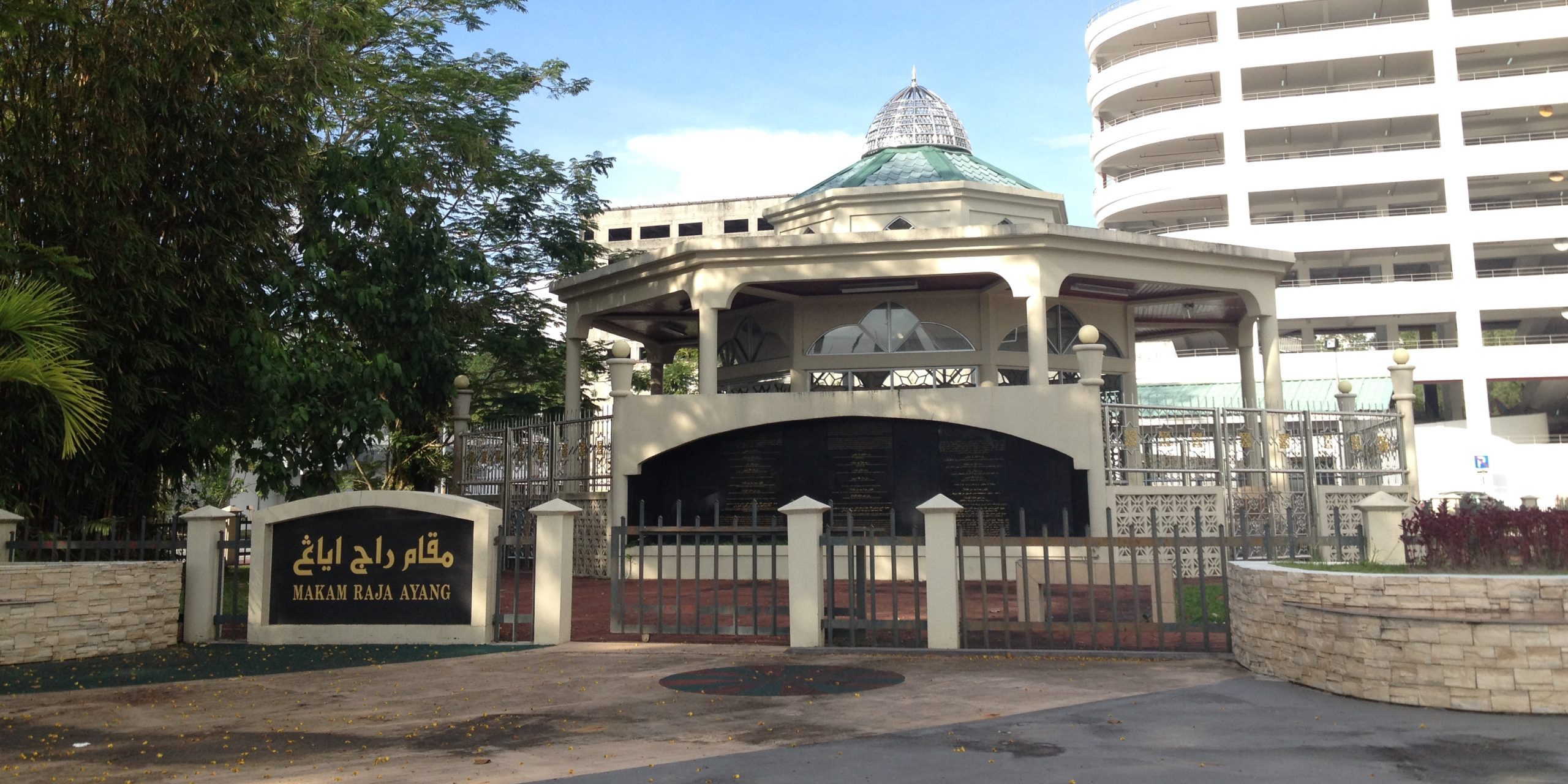 You may be wondering what’s the story behind the gravesite that can be found in the heart of the capital. Well, it’s actually quite a sad story.

According to stories passed down from generation to generation, Raja Ayang was a lady who was a descendant of Ibn Ismail bin Yusof bin Al Aziz Al Khawlani and was related to the Brunei Royal family. The lady in question had an unlawful relationship with a sibling, which contravened Islamic religious laws, and was subsequently punished.

During that period, Sultan Sulaiman was known as a king who strictly adhered to Islamic principles. The incident provides a clear picture of the Brunei Sultan at that time, who was firm in carrying out punishments against anyone who went against the Islamic law, and those who were punished were willing to receive the punishments.

In the case of Raja Ayang, no one had the heart to stone the couple to death. However the couple could not be left unpunished, and so they were banished to live in an underground shelter, away from the rest of society, and to live out the rest of their days in seclusion. This punishment was willingly served by the couple, who understood the gravity of their crime.

The shelter was shaped like a hill and had many rooms with cooking utensils and sufficient provisions to serve out their sentence. Historians say it was unclear as to how long they survived as some stories recount that they lived for a week, while others for as long as 40 days.

According to one historical narrative, the lady was banished to live alone for the rest of her days, while another says she and her entourage voluntarily went to their deaths.

The hill, three metres tall and twelve metres wide, no longer exists as the grave was damaged and levelled by a bomb during the arrival of the allied forces that ended the Japanese occupation of Brunei Town around May 1945. (Source: “The Golden Legacy” column from the The Brunei Times, April 7, 2007) 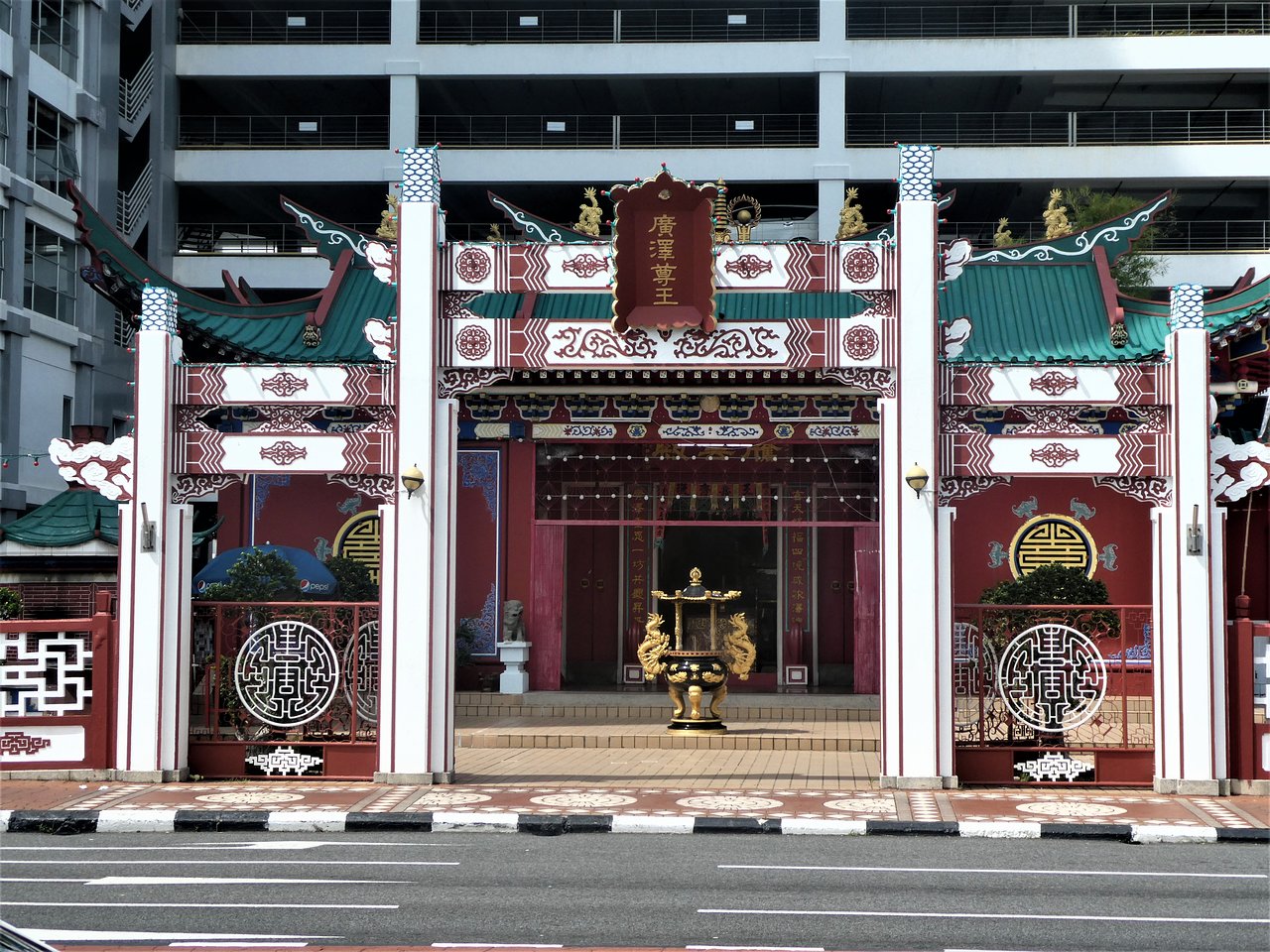 It’s interesting to note that the first Chinese Temple in Bandar Brunei was built in 1918, according to a research paper written by Carrie C Brown and published in a collection of articles entitled “From Buckfast to Borneo”.

In the 1950s, the temple was originally next to the Customs Building on its right and the government rest house on its left. The temple was demolished and a customs warehouse was built on top of the old temple site. You can walk back to (1) to have a rough idea where the old Chinese temple was located.

The new Chinese temple was built facing Sungai Kianggeh where it is located currently.

Jing Chew Was Originally From Bandar? 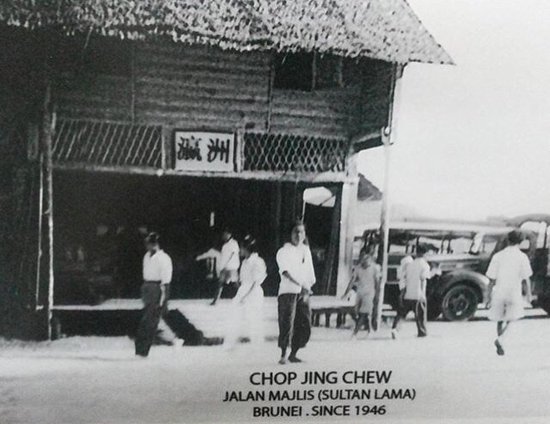 When people think of the famous bakery and coffeehouse, Jing Chew, more often than not, they will picture their popular riverside location in Gadong / Menglait.

“Jing Chew was there at that corner,” Kem said as she walked past shop lots opposite the BSB Waterfront (now known as the Dermaga Diraja or Royal Wharf) during a sunny afternoon at Bandar Seri Begawan. “The famous coffeehouse was once located in the capital along Jalan Majlis (Sultan Lama).”

If you were to dine at Jing Chew in Gadong / Menglait these days, you’d be able to see a photo of the old coffeehouse in the capital with the words – “SINCE 1946”.

What other facts do you know about Bandar’s past?

Perhaps you could strike a conversation with an elderly relative or friend who grew up in Bandar Town? We here at Neue would love to hear from you. Leave a comment below.

And while you’re here, put your knowledge to the test by clicking here to check out our quiz.