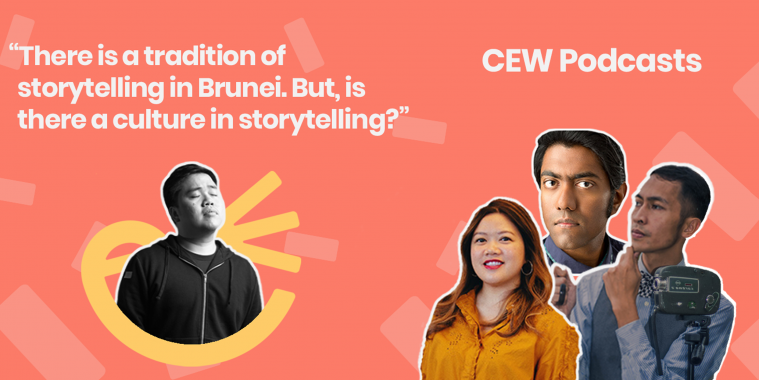 CEW PODCASTS: A summary of Episode 3

Representing Brunei in fictional media, whether it is on pages or onscreen, is important for multiple reasons. This podcast discusses why so, what the Bruneian creative identity may be and how one can make their fictional work more ‘Bruneian’.

Moderated by A’aqiil Ahmad of Filterworks Productions, he is joined by Abdul Zainidi (Worm and the Widow, 2020), Dr Kathrina Mohd Daud of Heartwrite (The Fisherman King, 2020) and Khai Anwar of AD Comics (Tebuanman, 2019).

The podcast begins with an examination of what makes a Bruneian – Bruneian? A lot of it has to do with how we portray ourselves in our work, says Abdul Zainidi who presents a different, surreal and odd side of Brunei in his work. Dr Kathrina thinks it’s a difficult question to answer, because the point of Bruneian art isn’t to answer it but to pose it in several different ways. In many ways, every Bruneian work is a way of answering and asking it. By definition, anything that comes out of anyone who identifies as Bruneian is Bruneian.

There are multitudes of Bruneian experiences and all of them are valid; it’s why these writers draw from their own experiences to write their stories. Abdul Zainidi explores unemployment and stagnation in one of his films whereas Dr Kathrina explores the possibilities of life in Kampong Ayer in The Fisherman King. Khai Anwar has a slightly different approach to this as he “is the least Bruneian out of everyone.” Even so, the history of his own home country is more foreign to him, finding himself more ingrained in Brunei’s history. He has also been vastly fascinated with Bruneian history and mythology, thus incorporating these into Tebuanman. He also finds that identifying the history of Brunei in fictional works make it close to being Bruneian.

The conversation then shifts to the differences between culture and tradition, and how one affects the other over time. One definition might be that tradition is something that is custom to Brunei whereas culture is what you grew up with. Another is that culture is what’s around you whereas identity is what you take in. Yet another definition compares the differences of culture and tradition with stories and folktales; culture is shaped by external forces at a certain point in time whereas tradition enforces the culture at a certain point in time.

Then, the writers consider what makes a character Bruneian. Khai Anwar says that Azri from Tebuanman is incredibly patriotic and makes reference to how Bruneians handled the COVID-19 pandemic. Abdul Zainidi portrays his characters and stories in context of Bruneian superstition and folklore, reflecting the unseen Bruneian world onto film and paper. Dr Kathrina references the demon god in her story and agrees that the character is related to the perception of divinity and religion in Brunei.

Bruneian stories have always been passed down in a transient way. They are often cautionary and morality tales but there is a sense of shifting cultures in the way stories are being told. Dr Kathrina reflects that the purpose of cautionary tales is to shape the morals of the next generation, but these days, the youths and creatives in Brunei are using stories to understand who they are. Could it be this is a direct response to the way stories used to be told, Khai Anwar ponders.

A’aqiil wonders how to make fictional content that is more Bruneian. Perhaps that isn’t the point of making art – it isn’t  to ask, “How do I make something that is the most Bruneian?” It’s, “How do I tell a story that by its very nature is Bruneian?” For Khai, that means that, while Tebuanman incorporates Bruneian elements into the comic like landmarks, names and characters, he wants to ensure that when Bruneians pick it up, they’ll think that it doesn’t feel Bruneian. At the end of the day, it uses aspects of Brunei as a launch pad. It’s about a Bruneian superhero – but it isn’t a Bruneian story.

Dr Kathrina says that it isn’t the job of any creator to write something as complex and multifaceted as representing a whole country – it just isn’t achievable. The power of story is that you can go into something very specific, like a very specific aspect of Bruneian stories. Everything Bruneian writers are trying to do is Bruneian, but there are many, many faces of Brunei.

The conversation then shifts to censorship: how does censorship affect the Bruneian-ness of works of fiction? Khai thinks that putting something too overtly Bruneian will remind people that it’s set in Brunei, possibly making censorship harder than it is. Abdul Zainidi disagrees that it’s okay to be full-on Bruneian in your works. Just adhere to the censorship guidelines. It’s essentially pushing the boundaries of creativity.

Dr Kathrina chimes in, saying that censorship boards are institutions that recognize the power of fiction and how it can shape someone’s perception of the world. Therefore, there is pressure to present an airbrushed version of Brunei. We all want to tell stories of Brunei but we all have different versions of Brunei we want to portray.

Creating Bruneian Worlds of fiction continues to be a winding road that local creators continue to traverse.

Listen to the full podcast on Creative Economy Week’s Youtube Channel  or head over to Progresif Media for the audio experience.