From Script To Stage 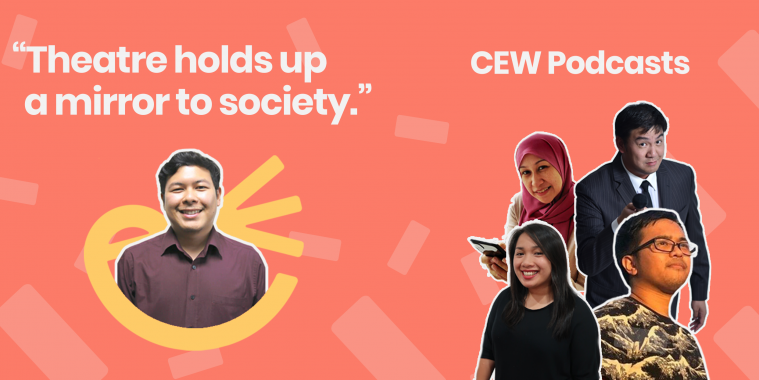 CEW PODCASTS: A summary of Episode 1

It takes months to stage a 2-hour performance, and even longer during these times of pandemic. So, what goes on before the doors open and curtains are drawn for showtime? From Script to Stage unpacks the process and all that jazz.

The conversation begins with the impacts of COVID-19 on show productions. For the ones who were already preparing shows, the sudden lockdown and restrictions of the pandemic posed as an obstacle. How were auditions to be held? What about callbacks? Eventually, as it always does for a creative, the challenge turned into an opportunity to refine scripts, in the case of the playwrights, and a goldmine for comedic material, for Kevin Cheong of BruHaHa Comedy. The absence of chicken nuggets were unanimously deemed a tragedy.

While COVID-19 has impacted the timeline, many of the processes that go into the show-making stage remain the same for the podcast guests.

BruHaHa often begins with deciding how many shows to do per year. Then, the comedians are tasked to come up with materials for said shows. The management team of the troupe, an essential working part of BruHaha, guide the comedians through a process of rehearsals and refinement. All of it takes up to a month to a month and a half.

Medley House Productions’ ideas and concepts of the show come from the founder of the group, Insan Mardini. He pitches his ideas to his members and, when they decide they like the idea, begin rolling out a process of appointing a core team. The members of Medley often switch roles to gain experience in other areas of the field.

Salted Egg Production’s Zuliana Masri laughs about the less organized structure of their production timeline as it often begins with the desire to put up a show, as women and friends in a theatre group. Their shows will always be about women and issues that are relatable to Bruneian women. Theatre as a medium is often challenging but it is the most comfortable one for the women of Salted Egg. They enjoy the idea and magic of bringing women together for a night of live performance.

BADS  started in 1964 as a society by a group of international teachers. Over the years, BADS’s productions have been guided by the principle of growing their group and attracting new members. Eventually, the society realized that a lot of people want to perform on stage but no one no one really wants to take on the production side. That’s why the members of BADS are often in the production team, to train more people up in this side of production. After all, the direct and formal training for theatre production is readily available in Brunei, so experience is key in the theatre production process.

All four members take on many different hats in the show making process. Some believe that it is an integral part of their life experience, having juggled many things in their other endeavours. All of them do not mind multitasking because the mentality in Brunei as creatives is to just get it done. Get the production done, no matter the process.

Though the speakers enjoy the challenge of this role, Insan laments that people might think that theatre production is easy. Unemployment rate in Brunei is skyrocketing and youths have been turning to the creative industry for employment. The problem is that some do not see the gruelling work behind-the scene and expect a 9 to 5 job. When in reality it’s more like a 9 to 9 job.

The speakers also ponder the biggest challenge of writing an original script. Creative flow is key but is often interrupted in moments of distraction and slumps. Creativity is also fleeting, in that it comes and goes, and might strike in the oddest hours of dawn.

In the end, there is so much work, challenges and obstacles that goes into creating a show. Watch the full podcast on our YouTube channel or head over to Progresif Media for the audio experience.